Some memories fade in time.  But, working through all the details I do recall, I'm able to confirm timelines of many of my post childhood Joes.  What I do remember about the 1993 Countdown is that I found him over spring break when I was home from college.  I also remember that I emptied out a jar of change and paid for this figure in quarters at the local KB Toy Works that was at the Lafayette Square mall in Indianapolis.  Remembering that the weather was nice helps me place this as a 1995 purchase. That also jives with my recollection of him being among the first figures I added to my collection around this time.

Countdown's color scheme is just poor.  The blue flightsuit is too close to Cobra colors.  (And, the plastic Hasbro used is REALLY susceptible to discoloring.)  The white and red mesh well enough.  But, the figure is busy without being put together.  The 1989 and 1994 paint jobs tie the mold together much more tightly.  The yellow accessories exacerbate the problem.  The figure just seems noisy.  It's hard to pair him with other figures for photos and he seems out of place in most vehicles.  While the mold is strong for an Astronaut, the more subtle paint choices on the other releases are far better options with the Crusader or Defiant as well as any other Joe aircraft.
The paint job obfuscates the quality of the Countdown mold.  The space suit is sleek and the helmet is a tight fit without being detrimental to the paint on the figure's head.  It's a look that's instantly recognizable as an astronaut.  But, also somewhat futuristic and modern.  In short, it's a perfect look for an astronaut on the G.I. Joe team.  The holstered pistol and various canisters on the body work for a military spaceman.  Sadly, though, without a backpack, Countdown's survival in space would be severely limited in time.  1989 Countdown packs work well enough and were common to find back in the early days of Joe collecting.  But, the lack of a pack was one of the reasons why this figure found himself an earth bound fighter pilot instead of an astronaut in my Joe world.

This Countdown no longer serves any real purpose in my collection.  I have better Countdown figures to display and use in photos.  The only reason this figure holds any value to me is because he was one of the figures I had early in my return to collecting as a young adult.  I was a broke college kid who bought this figure in change because the price was right and, at the time, any figure that had a removable helmet and could be used as a pilot was in my wheelhouse.  So, Countdown quickly found himself in the Razorblade.  Here, he was a nameless, faceless pilot who was blown to bits, incinerated, flatted upon impact or drowned in the ocean when his aircraft was destroyed.  But, this was short-lived.  First, Countdown's colors didn't really work with the more military themed paint job of the Razorblade.  But, second and more importantly, Ozone was more fun to play with.  His smaller helmet allowed for greater head movement and, by proxy, much more brutal death scenes.  So, Ozone became the pilot du jour in the Razorblade and Countdown fell out of favor...never to return.
Twenty five years later, this Countdown's place remains the same.  While I love Star Brigade, the 1993 Countdown isn't really part of that equation.  The Countdown character is the 1994 figure.  When I look at this 1993 version, I do remember the times when I had only he and Ozone as pilots.  But, my memories are mostly of Ozone due to his far better death scenes played out with the less limiting fit of his helmet.  I tried Countdown as a deep sea diver.  But, the 1993 Payload worked better for that.  And, I added the 1989 Deep Six to my collection relatively quickly in the late 1990's.  So, this Countdown sat, unloved for many years.  While I still have a carded version, this loose figure is starting to discolor due to neglect.  It's a sad fate for the figure.  But, kind of analogous to his history in my collection.

Countdown's accessories are not great.  The reason they're not great is because they are bright yellow.  Really, the weapons included with the figure are excellent sculpts.  But, in bad colors, they lose all their value.  Countdown's main rifle is a re-sculpt of the 1992 Cloudburst rifle.  I have little recollection of this yellow release.  Instead, all the memories of this weapon being introduced into my collection are from the 1993 Backblast's black version.  The gun is large.  But, I find it a nice complement to 1993 era figures.  Countdown also has a huge rocket launcher.  I've never really liked it as it's a bit outlandish.  But, the weapon can have some uses.  There is also a nice, slim knife.  In black, it's pretty good.  In yellow, it's not.  Countdown is completed with a figure stand and the requisite spring loaded missile launcher.  In black, this gear would have been cool.  But, in yellow, it's not.  You can get this same weapon tree in an interesting green color with the Funskool Countdown figure.  While it still doesn't really mesh with the 1993 Countdown paint job, it has more uses with other 1993 figures.

Countdown had a nice history.  The first version of the figure appeared in 1989.  This release was silver, white and blue and is one of the nicest astronauts Hasbro ever made.  The red, blue and white 1993 release is drastically different.  The 1994 paint job is grey, green and blue and is a striking figure that's easily on par with the 1989 release.  Hasbro then sent the mold to Funskool.  They started producing a Countdown in India starting in the late 1990's.  There are a few variants of this figure: mostly slight color shadings and differences in eye paint.  Countdown's head appeared in some of the Funskool marketing incentive figures, too.  Collectors have three major paint variations they can track down.  And, one Funskool figure that is based on this 1993 paint job.  That's a lot for an astronaut.  Of course, I'd take another repaint of the mold.  But, this will never happen and I'm content with what we actually got from Hasbro.

The 1993 Star Brigade figures actually share a general look.  Countdown shares the red and white with Roadblock and the red and blue with Ozone.  The colors aren't a perfect match.  But, they show more uniformity than other late subsets.  Payload is the only outlier.  Though, his blue 1994 variant would kind of fit with the team.  The real oddball of the series, though, is the cardbacks.  The 1993 Star Brigade featured the first generic card art in the line's history.  Instead of each character getting their own artwork, the packaging features an Astro Viper and the mold that was supposed to be Payload.  (Hasbro couldn't find the 1987 Payload mold.  So, the 1992 Eco Warriors Barbecue was tapped for the character instead.)  Even the cardbacks featured photos of the actual figures instead of thumbnails of the card art.  (Though, the green Payload on early cardbacks is either airbrushed or a photo of a handpainted sample.)  The Armor Tech Star Brigade figures did get unique card art and appear as artwork on the cardbacks.  But, Hasbro was about saving money as the line limped to the end.  1993 Star Brigade would be joined by the Shadow Ninjas in 1994 as the only U.S. Joe releases with generic card art.  The entire series suffers for this as the cards are generic and not that eye-catching.  The 1994 Star Brigade series is one of the nicest looking subsets in the line.  1993 Star Brigade might be the worst.

High quality carded 1993 Countdowns run around $18 or so.  But, there are lots of off condition carded samples available that tend to sell in the $10 range.  This is about the same price you'll pay for a mint and complete with filecard Countdown.  Figures that aren't complete will run about $5.  In short, loose 1993 Countdowns remain one of the really cheap options for Joe collectors.  But, this red, blue and white version is, easily, the worst paint job for this sculpt.  So, his pricing makes sense.  While I love Star Brigade figures, I'm not fond of this Countdown.  All of his other versions are better.  This figure, though, does still have a connection to me though his time of purchase and his existence in my collection when my pickings were slim. 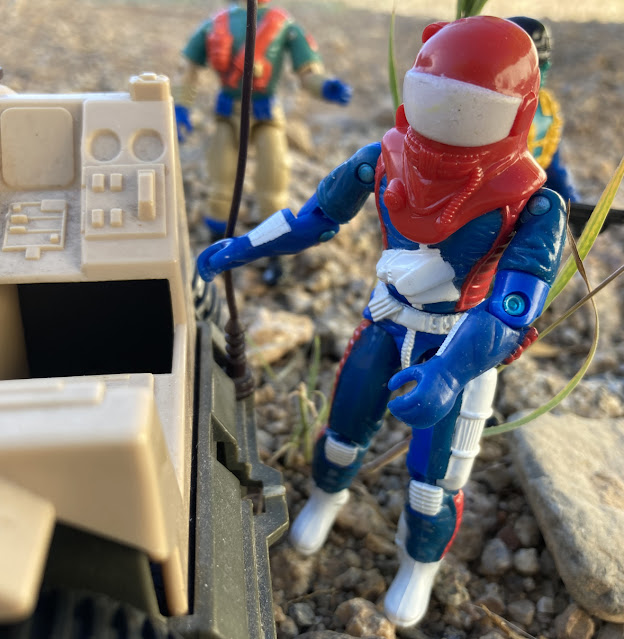 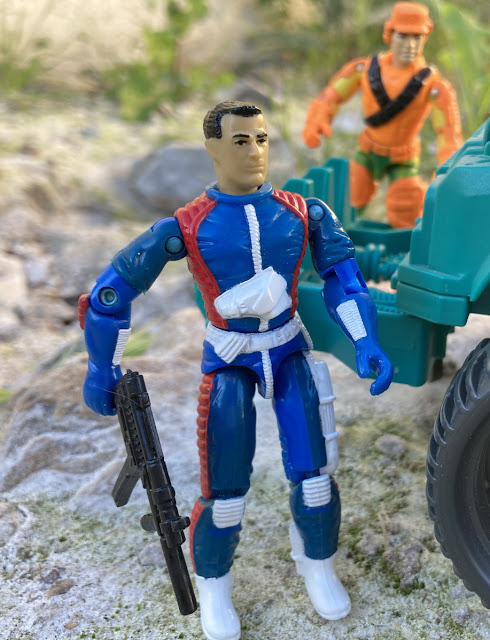 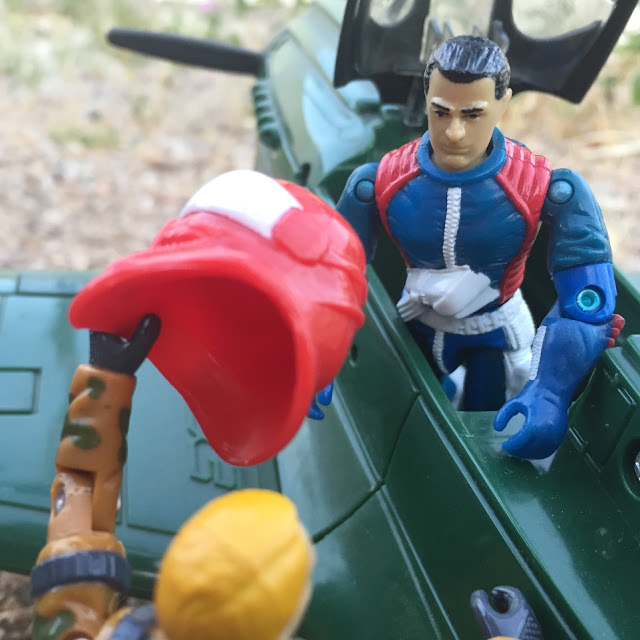 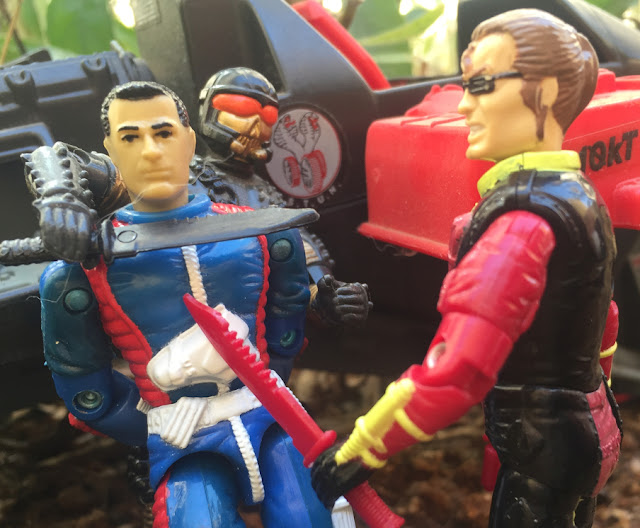 Posted by Robot_Sonic at 1:07 AM
Email ThisBlogThis!Share to TwitterShare to FacebookShare to Pinterest
Labels: 1993, Countdown, Star Brigade