At this point, there are more factory custom figures than there were vintage Joe repaints in the 2000's.  Which is to say: there's a ton of them out there.  Some, like logo variants, are barely noticeable and only fall onto the radar of the most meticulous variant hunter.  Others, obscure army builder repaints or off color designs meant for fun, may be off-putting.  The classic army builder repaints, of course, remain popular.  The last bastion of the factory custom is the "near-Hasbro" figure.  These are designs that look like something Hasbro might have created.  In some cases, these figures are based on early prototypes or unreleased concepts.  In the case of the Commando figure, the figure is based off of a coloring for Snake Eyes that appeared in an early Joe sticker set.
Everyone knows Snake Eyes.  The masked man in black has been a staple of the Joe line since 1982.  Supposedly, he was all black to save money on paint applications.  Through the years, Snake Eyes retained his black look.  And, the repaint era was filled with black Snake Eyes figures with various painted highlights.  One look we never got was Snake Eyes in a more militaristic uniform that better matched his other original team members.  On a sticker sheet produced in the line's earliest years, Snake Eyes appeared in green camo, bare hands and a black mask.  It's a profound departure from the traditional Snake Eyes appearance.  It was not something Hasbro mined as the dumped repaint after repaint of Snake Eyes into the marketplace in the 2000's.  So, finally seeing a figure based on this concept in 2017 seemed massively overdue.
Red Laser's take on the Commando design definitely delivered.  The main drawing point is the green, brown and black body.  Commando features a light green shirt that is broken by brown straps.  His pants are an intricate camo pattern featuring a light and dark green.  The figure's head is black, true to Snake Eyes.  But, the real detail is almost hidden.  Commando's head is not a single color.  Instead, it is a charcoal color with black goggles.  This little detail gives the figure much more depth without being too overbearing like many of the Hasbro repaints of this head would tend to be.  He's rounded out with black boots and pistol as well as a charcoal grenade.  In short, the figure is extremely well colored for a factory custom and looks like it could have been something that Hasbro had made.
One of the sticking points I have about this figure is the uncovered hands.  Sure, the sticker upon which he's based didn't have gloves.  But, there are times when accuracy to source material and the aesthetics of a good toy collide.  Master Collector was notorious for this and they diminished more than a couple of their releases by staying with a detail that was accurate, but looked bad.  Commando has the same issue.  It's weird to see a guy who's entirely covered except for his bare hands.  You can come up with all sort of practical reasons why the ungloved hands work.  But, they still look out of place.  And, this figure would have been perfect had his hands been painted black or charcoal to match his mask.
One of the great points of the Red Laser releases is that they were based on unproduced, pre-production or just weird, offbeat designs from other Joe media.  This allowed for a set of figures that meshed well with vintage figures.  The limited parts library didn't much matter in 2017.  But, it did get somewhat limiting by 2018.  Figures like Commando and the General are releases that simply belong in every collection as they are so different from anything Hasbro released.  Sadly, Red Laser is no more.  I'm always a fan of more vintage Joe releases.  So, having multiple partners who produced Joes was a nice way to get some variety.  With Red Laser out of the picture, it's unlikely we'll see more figures who can expand the 1983-1984 Joe style mythos.  It's very unfortunate.  But, I'm grateful for the figures we did get as guys like this Commando will always have a home in my collection.

Commando's gear isn't great.  The 2017 Red Laser figures didn't feature a ton of accessories.  And, much of what they did have was repetitive.  Commando had a nice complement of weapons, though.  He included a black version of Recoil's rifle, a black Airborne backpack and pistol and a knife.  I believe the pistol and knife were based on Marauder, Inc. gun designs.  But, please correct me in the comments if that is not accurate.  While this gear seems good on the surface, the reality, though, is that Commando can't really hold any of it.  The pistol and knife have large handles.  And, the rifle is too large for the figure's hands, too.  All of the Red Laser figures from this era have very tight hands.  And, as they are not made of the pliable plastic from the 2000's era Joes, the thumbs can break if weapons are forced into place.  Most collectors have resorted to shaving down the weapon handles so that these figures can hold them.  I have yet to take that plunge.  But, Commando gets less usage than he might otherwise since it's very difficult to pose him with weapons.
Quality wise, Red Laser figures are pretty solid.  They are not vintage Joe quality.  And, the lack of pliable plastic hands is an issue that plagues many figures in the set.  But, the joints are tight and feel like a real toy instead of a fragile collectible.  The figure poses well and will stay in place.  Factory customs have always been a mixed bag of quality where some figures are pretty solid and others will have issues.  Commando seems one figure that is usually pretty good.  There weren't a ton of quality complaints on the 2017 Red Laser offerings.  So, you can buy with a bit of certainty that the figure won't fall apart or have floppy joints unless someone has used it to death.

Commando was one of the more popular 2017 Red Laser Army releases.  He would sell out from time to time and disappear for a few weeks before a few more would pop up again.  Now, though, he's long gone from original sellers (at least in bulk) and appears for sale infrequently.  As such, he's gotten expensive.  You can still get him under $40 if you spend enough time looking around.  That's not terrible for a new version of Snake Eyes that is in colors you don't see anywhere else. But, it's also a lot when you consider what else you could get for the money.  But, Joe pricing is still pretty high and probably heavily inflated.  Low production number items, though, don't tend to flow back into the market in great abundance, though, when there's a correction.  I'm happy to have purchased this figure upon his release.  With factory customs, you sometimes win and sometimes lose with that strategy.  But, it ensures you get the figures you want. 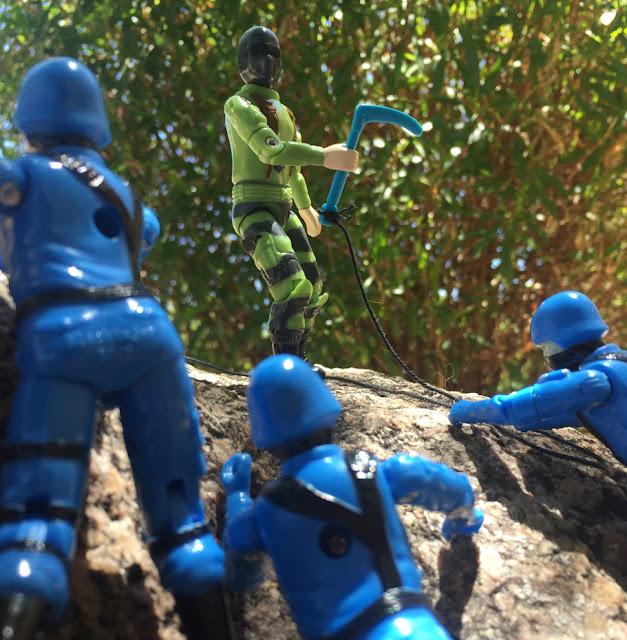 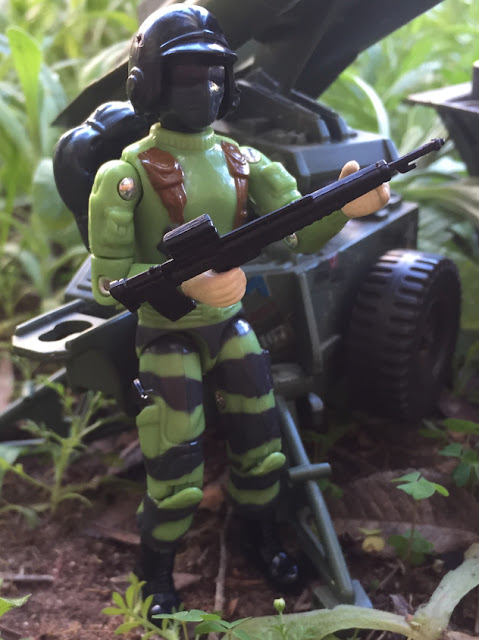 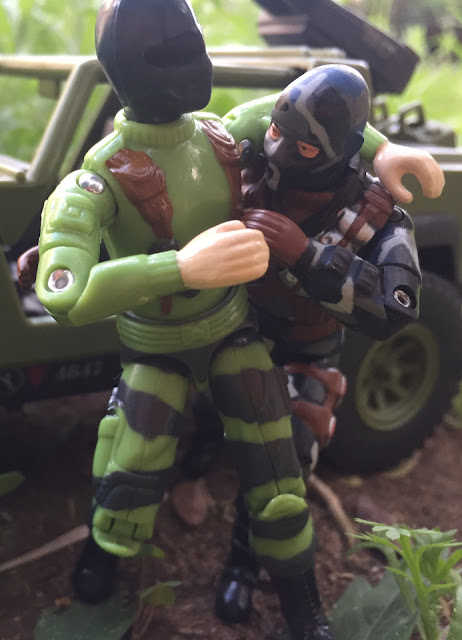