At the 2003 G.I. Joe Convention, Hasbro showcased the upcoming Cobra Infantry 6 pack.  This set included four Cobra Troopers and two Cobra Officers that were painted up as homages to the original characters from 1982.  It was a hugely anticipated set and proved to be extremely popular.  Collectors of era assumed that Hasbro would then repaint the molds into the rainbow of basic troop colors that every Joe fan had yearned for since 1984.  At the time, Hasbro was repaint mad and collectors were army builder obsessed.  It was a no-brainer.  But, then, it didn't happen.  Sure, a Cobra Trooper and Officer showed up in the first 5 Comic Packs.  But, they were poorly colored and used terrible arms.  As 2005 brought about the retail line's cancellation, it became apparent that collectors would never get Stinger or Crimson Troopers.  The loss of these highly desired releases, though, was drowned out by the general malaise over the line's overall demise.  But, Hasbro then offered collectors a lifeline: the DTC experiment.  Among the figures and vehicles that comprised these online only toys was a 6 figure set of classic Troopers and Officers: the Night Watch.

At first, collectors were ecstatic about the Night Watch.  Cheap Cobra army builders were rarely scoffed at.  But, once in hand, the oddity of the release hit home.  The Night Watch figures didn't really fit anywhere.  Sure, they were supposed to be Cobra's night guardsmen.  But, their color scheme didn't fit with Night Vipers.  Nor did it really match up with the Stinger or it's driver.  They were an island unto themselves.  And, this quickly took a bite out of their popularity.  Slowly, the sets began to stagnate.  And, when Hasbro finally sold all of their non-moving online stock to Toys R Us, there was a large supply of Night Watch sets that were included in the sale.  A year after the set's online release, you could find plenty of Night Watch sets hanging at Toys R Us stores around the country.

With time, though, comes perspective.  And, this set was both over-hyped and then overly derided within its release window.  Now, though, you can see the figures in the set for something new.  The Night Watch doesn't fit the traditional definition of Cobra Trooper colors.  But, the bluish-grey with camo pants does add some design flair to a normally staid look.  The grey pads on the chest straps bring out the detail on that feature that had been lost to a sea of black on other releases.  The multiple skin tones allowed for more diverse army building.  Though, Hasbro did do away with the differing eye and eyebrow colors for the caucasian members of the 2004 Infantry set.
Truth be told, I don't much use the Night Watch figures any longer.  Not because they are bad.  It's just because there are better versions of the Cobra Trooper that were released by the factory custom makers in the ensuing years.  So, the uniqueness of the Night Watch is lost as there are lots of Cobra Troopers out there with multiple colors, additional painted details and camo pants.  And, the factory customs include the correct arms as well as the original rifle.  So, they offer all that made the Night Watch unique.  But, in getting these figures out for photos, I was reminded of their quality.  They seemed a bit odd at the time.  But, the details make for good figures.  But, because we were deprived of basics like Stinger Troopers in 2005, these Night Watch Troopers became victims of collector expectations.  We wanted them to be something they were not.  And, they were dropped because of this.  When taken for what the Night Watch is, the figures hold up much better.

The Night Watch Trooper's accessories are OK.  The Toys R Us six packs had devolved into a just including massive amounts of non-sensical gear for the figures.  The Night Watch brought back a bit of order to the weapons...even if it meant a decrease in quantity.  Each of the four Troopers includes the same black stand, black knife and black rifle.  Both the rifle and knife are JvC era designs.  But, they actually work with the older figure molds.  The knife is menacing.  It looks good and it's always nice to have extra bladed weapons lying around.  The rifle is also OK.  It's a rifle/grenade launcher combo that debuted a few years earlier.  It's compact for what it is.  The handle is a bit blocky, though, and would snap vintage thumbs.  The softer, more pliable plastic used in the 2000's releases, though, allows the Night Watch Trooper to hold it with no fear of breaking.  In fact, the greater issue is that the weapon stretches out the figure's hand so much that you have to push it back into place before he can hold the weapon again.

This figure uses the same parts as the 2004 Comic Pack Cobra Trooper.  Supposedly, the change from the 2004 Toys R Us Infantry figure mold was due to Hasbro finding the original Officer and Trooper parts in a different factory.  The sad part is both the waist and arms are from the 1984 Roadblock.  I don't really mind the waist.  It does look a bit out of place.  But, it doesn't bother me to the extent that it does others.  The arms, though, are a different story.  Roadblock's arms were meant to be bare.  So, with painted sleeves, they look skinny.  I thought that Thunder's arms on the 2004 Troopers worked well.  But, these Roadblock arms are the weakest point of the Night Watch figures.  The original Cobra Trooper arms were iconic in that they included the piano wire that really gave you an idea of how bad they were.  Losing that detail (and all details) on the Night Watch figure made them appear more plain.

In looking back at the Direct To Consumer strategy, Hasbro was really ahead of their time.  In 2021, a series of collector themed toys sold via online dealers who cater to that constituency should be viable.  More than a few companies make it work.  But, in 2005, it was downright innovative.  We do have to account for the fact that that toys had already been designed and molds created.  So, Hasbro had a lot of sunk cost into their creation.  So, the proposition was less risky for them than it otherwise would have been.  The fact that DTC failed is both a function of the timing (2005 was a LONG time ago!) and the size of the Joe collecting world.  Joe collectors like to believe we exist in great numbers.  But, we don't.  And, we never have.  People point to large populations on various social media forms as proof of a large size.  But, those groups are mostly people who joined to ask a question (usually about value) and then never come back.  There's a few dozen to a few hundred really active people out there with an overall collecting community that's, maybe, 10% of the size of the Star Wars community.  In short, there aren't enough of us to sustain a line.  Even in 2021, that's true.  The Joe toys we see are geared towards people who collect scale: almost exclusively at retail.  If they flock to Joe, we'll get more of that product.  But, there aren't enough of us 3 3/4" collectors left to really support a toy line.  And, that's now been true for 15 years.

Like all of the 2000's era ARAH releases, the Night Watch sets have kind of dried up.  You can get boxed sets in the $80-$90 range.  And, dealers tend to sell a lot of loose, complete sets for similar amounts.  This appears to be a deal, though, since dealers will get up to $20 per figure for the individuals with many still reaching $16 on the open market.  It's a far cry from the days of these being $3 or $4 figures.  And, at current pricing, it's hard to justify these figures.  Most of the factory custom paint jobs of the Cobra Trooper are better.  And, they are around the same price.  The Night Watch is something different.  But, it lacks a true identity and it doesn't really mesh well with any existing Cobra units or vehicles.  If you can get them cheap, the bizarreness of their release is worthwhile.  But, at current pricing, there are a lot of better options out there for classic Cobra Troopers. 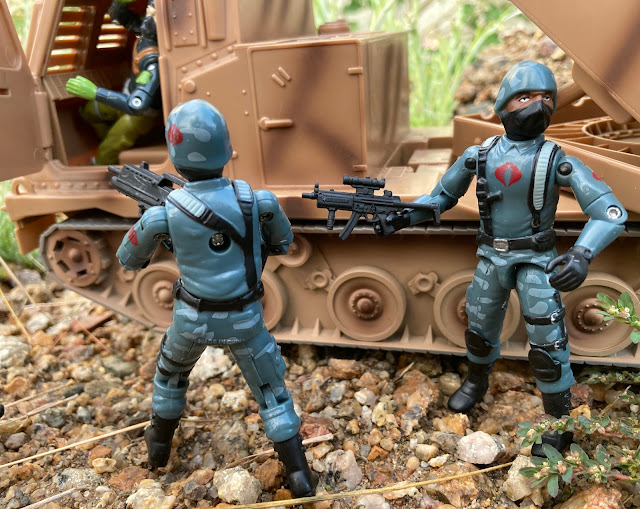 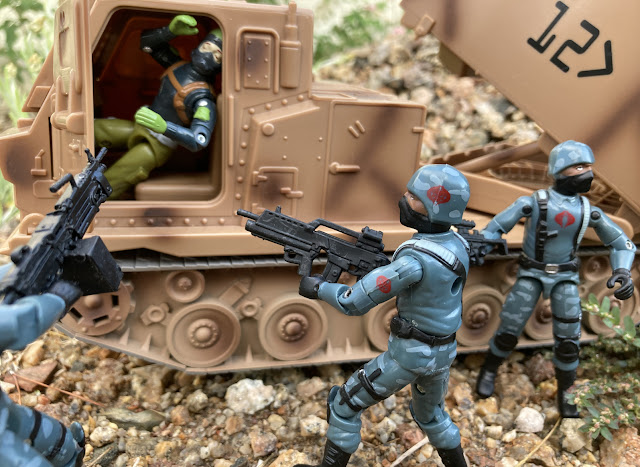 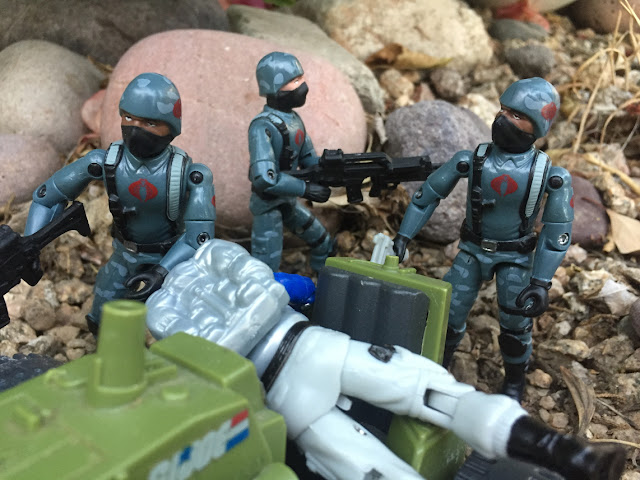 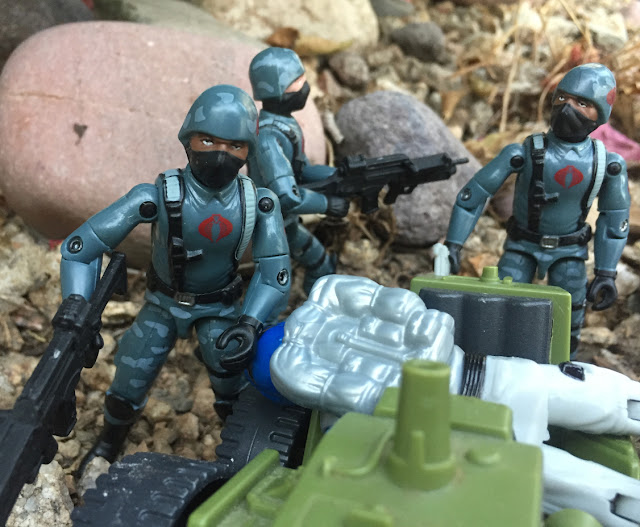 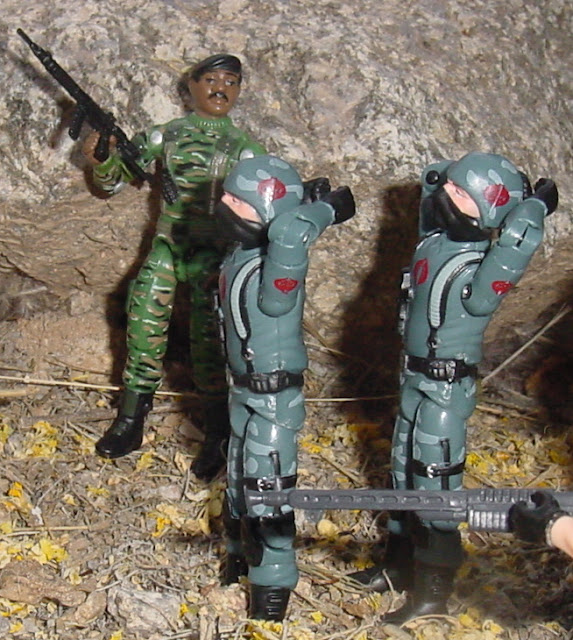