The 1995 Ninja Commandos were right behind the Manimals in terms of almost making it to production.  While packaged and loose samples of the Manimals exist, only loose samples of the Ninja Commandos are out there.  But, they are full production versions and even feature accessory trees.  Originally, the set was to be 6 figures.  But, it was reduced to 5.  The biggest name in the set was Storm Shadow.  This new version isn't a terrible look for Storm Shadow.  And, had I come across this hanging on a peg in 1995, I'd have probably bought him, even while I left other Ninja Force figures behind. The colors are subtle.  And, the figure kind of looks like Storm Shadow.  The more muted appearance would have been attractive to me as a neophyte collector.

Did you know that there was also going to be a variant Storm Shadow released in the Ninja Commando line?  There is a second set of color masters that show some significant variants were planned for Ninja Commando figures.  Storm Shadow was one them.  The variant figure featured bright orange grenades and an orange cloth on his right leg.  The shoulder pauldron is grey and the figure's mask is all white.  It's actually a better Storm Shadow and would have matched nicely with T'Gin Zu.  Alas, neither figure made it to production.

After ignoring these figures for a long time, I've become fascinated by the Ninja Commandos in recent years.  Their designs are not bad.  And, they would have been a nice supplement to the sparse Battle Corps Rangers releases that would have also graced the shelves in 1995.  While I would have likely skipped Road Pig and even the Flint, this Storm Shadow would have been a good enough match for other figures that he would have called my collection home.  For years, rumours speculated that an entire production run of Ninja Commands were produced and were rotting in a warehouse.  After 25+ years, these figures aren't going to magically appear and the rumour was likely just wishful thinking by collectors of the day.

But, as a fun aside, in the early 2000's, a collector visited Hasbro.  There, the Hasbro team had a bin of loose figures that they used to kitbash and paint up to developed repaints for the JvC and Toys R Us line.  In this bin were loose Ninja Commandos.  The Hasbro team had no idea they were rare, unproduced figures.  Sadly, though, we never got this figure at retail.  And, the dreams of one day owning a set of Ninja Commandos are now reserved for high dollar collectors who will treat them as museum pieces instead of the toys they were meant to be. 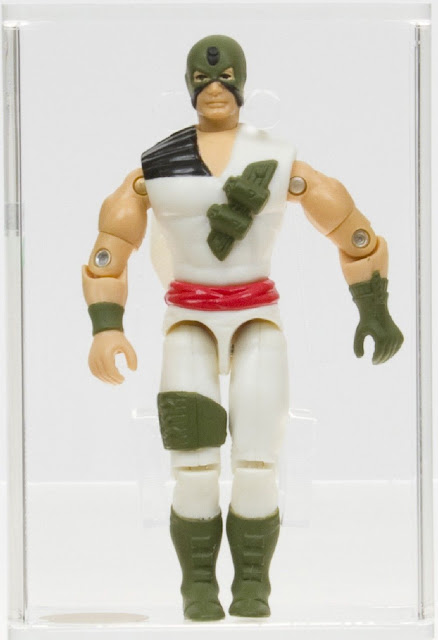 Posted by Robot_Sonic at 12:55 AM
Email ThisBlogThis!Share to TwitterShare to FacebookShare to Pinterest
Labels: 1995, Ninja Commandos, Rarities, Stormshadow, Variant