Eco Warriors are awesome.  They have been awesome since 1991 and the fact that it took nearly 30 years for the rest of the Joe community to come around on them shows how little taste Joe collectors tend to have.  Zombies were never awesome.  They were kind of interesting.  Then, they got stupidly overexposed and are more cliche than scare-vehicle these days.  But, the intersection of the two from 1992 is awesome.  It's awesome because the Eco Warriors neon purple outweighs overdone zombies.  But, it's also awesome because the character isn't an undead.  Instead, it's a toxic mutated Toxo Viper who has lost his humanity due to a rotting body and mind.  Sure, it's a bit out into the sci-fi realm.  But, Joe has always been sci-fi, despite the best efforts of military purists to re-define it.  And, the notion of the Toxo Zombie works quite well in the context of the super-villain like Cobra.

In the mid 1990's, Hasbro produced Joe figures for release in China.  Most collectors know these figures from the Chinese Major Bludd, Flint and Duke variants.  But, there are also several other figures: some common and some really rare that were produced.  The series of figures produced in 1994 are the most common and remain easy to find to this day.  This is due to the fact that many were sold to American discount retailers in the 1990s and were actually available in the US.  There are other series, though, that are harder to find and didn't see the same US distribution.  Among these is the Toxo Zombie figure.
As a figure, the Toxo Zombie is pretty good.  The entire premise is that a Toxo Viper was mutated into something less than human.  As such, the Zombie uses the Toxo Viper's uniform and replaces parts with worn away pieces that show the rotting flesh beneath the compromised suit.  The pinkish color with light green highlights make the figure look like a bleached out Toxo Zombie who fell into terrible chemicals.  Grisly grey flesh is exposed on the figure's left arm and foot.  Some of the armor is worn away and the pants are pock-marked.  The face shield is cracked to reveal a dismal visage with pink flesh, a sunken eye and a permanent grimace of pain.  For 1992, the sculpting is amazing.  But, must of the detail is lost by lack of paint applications.  This was also common in 1992.  With a differently colored face, blackened teeth and more hollow eyes, this figure could have been a work of art.
I've long been an Eco Warriors fan.  And, the 1991 Toxo Viper is among my preferred later Cobra army builders.  It was fun to have a single Toxo Zombie around to enhance photos.  But, I never really found a lot of use in an army of them.  With a few in hand now, though, there is some fun in having a Joe or two flee from a horde of brain dead monsters who only have evil intent.  But, it's also something that has little substance.  The idea of Dr. Mindbender or Cesspool having a few of these creatures in the basement of some warehouse is fun enough.  But, making them an essential part of a Cobra army doesn't work.  With no cranial capacity left, the Zombies are just listless masses that meander around the battlefield.  You could drop one or two into a Joe base for some chaos.  But, they would also be quickly dispatched since they don't really have any abilities beyond the scare factor.
It's here that my interest in the Toxo Zombie kind of ends.  I have no real story built around them.  Instead, the purely visual treat that is the pink and green help bring some photos to life.  So, I do tend to use them with some frequency as they bring much needed life to many displays and photos.  And, for that reason alone, the figures are very valuable to me.  It's always nice to bring color to a photo and the Toxo Zombie works for that end.  Maybe if they were $10 figures, I might be inclined to pick up a few more and find something to do with them.  But, the zombie craze made all Toxo Zombies desirable and the relative scarcity of the figure has helped his inflation outlive the fad.

There are a few noteworthy features about this figure and his card.  The first is the most obvious.  This Toxo Zombie includes a gun and backpack.  They are the same weapons that were included with the Sludge Viper and Toxo Viper from 1991.  It never made sense to me that the Toxo Zombie didn't include accessories.  So, seeing them here seems more correct.  The next noteworthy detail is that the card is printed in Chinese.  In many cases, foreign cards feature stickers placed over American carded figures.  That is not so in this case.  The card is printed in Chinese, just like the more common figures that were released in 1994.  This brings up the final point.  The cardback features a 1995 copyright.  So, this figure was produced by Hasbro in 1995.  Now, we don't know if the figures were leftover stock from the 1992 run or a new production run altogether.  But, this late date is very interesting since the line had been cancelled in the US by then.

American Toxo Zombie figures have never been easy to find.  But, they have gotten much more desirable in the past couple of years.  Carded American figures sell in the $40-$60 range.  Loose figures are offered by dealers in the $30-$40 and an appalling amount of them sell for that price.  Left to their own devices, Toxo Zombies are around $25 figures on the open market, though.  This Chinese version is both somewhat common and also obscure.  You can get carded figures in the $75-$100 range.  Though, the price will ebb and flow based on the number in the market.  The figures are the same and loose versions are, supposedly, indiscernible from the American releases.  So, loose, the only real differentiating factor is that this figure would have gear (that could have been pilfered from a Toxo or Sludge Viper) and the unique filecard/cardback.  It's doubtful anyone would pay an extreme premium for that. 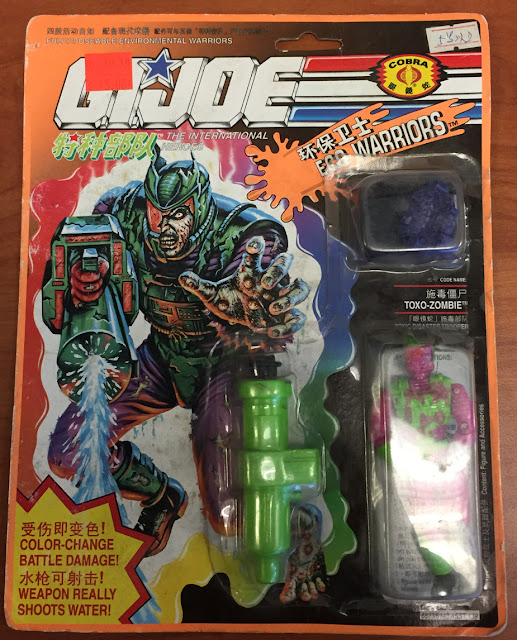