In 2004, Hasbro created the concept of Comic Book packs.  This product feature three classic G.I. Joe figures along with a comic for the low, low price of $9.99.  The main selling point of the comic packs, though, was the figures included would be updated to reflect their comic book appearance.  For the initial wave of figures, this meant almost all new heads were used on the figures.  Among the newly sculpted heads was an updated Baroness.  This design featured longer, flowing hair, an improved face sculpt and, most importantly, the ability to wear removable glasses.  Despite the ambitious attempt at re-doing a collector favorite figure, Hasbro fell a bit short with the design.  Collectors didn't really warm to it and the Baroness/Cobra Commander/Cobra Trooper packs quickly backed up around the country...even though they included a popular army builder.  As the Joe line died in 2005, Hasbro attempted to reduce costs of their Toys R Us exclusive offerings.  The figure mold choices included in the final four sets was not inspired and the accessory complement was even worse.  In the Cobra Imperial Processional set, the new Baroness head appeared again.  This time, it was atop an oddly colored body that was a shade between red and copper.  Once again, collectors ignored this Baroness design and this 2005 has fallen into the abyss of figures that have been left behind by today's collecting world.

One of the things we know about the Hasbro designers of the Joe line in the early 2000's is that they somewhat resented vintage Joe figures.  They couldn't build their resumes in the industry working on two decade old toy designs.  This was why there was far more effort spent on the JvC figures and, later, the anniversary figures than the vintage repaints could have ever imagined.  This is a big reason why the repaints of that time aren't very inspired.  At times, though, the designers got to do something new on vintage figures.  One of those items was the removable glasses for the 2004 Baroness.  In theory, this was an amazing idea.  Taking one of the character's hallmarks and turning it into a changeable part of the figure was somewhat ingenious.  But, just because you can do something doesn't always mean that you should.  And, while the idea behind removable glasses is good, the actual execution left much to be desired.  The glasses are bulky, cloudy and generally ruin the aesthetic of the Baroness's new head sculpt.  Another example is the Baroness' hair.  While her updated hair is more detailed than the 1984, compare it to the 2005 Cover Girl who was released the same year.  It's a night and day difference in what the designers were capable of creating.

The Processional set was another idea that was probably pretty good.  But, the execution wasn't great.  The figures feature and odd copperish-red color that doesn't match with any other Cobra figures in the line.  Cobra Commander and the Baroness made sense for figure inclusion.  The idea of 4 guards wasn't bad.  But, the molds combined for the guards were just a bit too offbeat.  Had this set included a Serpentor and been done in green and gold, it probably would have been substantially more popular.  Were the figures even in a more classic red, they'd better fit with other figures and be more key to collections.  As a stand alone figure, this Baroness isn't that great.  The 2002 Convention figures are substantially better and work well with more figures.  This figure can work as a cheap alternative.  But, that's about the extent of her value.  The new head isn't a perfect match for the body and I prefer the original Baroness head in every release.

Baroness' gear is crap.  The glasses are small and easily lost.  But, since most of the figures are in collector hands, they are not hard to find.  But, they really look bad on the figure and there's no real need to have them.  They are difficult to affix to her head.  And, once on, the glasses look far more like goggles than corrective eyewear.  Again, a good idea whose resources should have been spent on better weapons for the figure.  Aside from that, she includes a crappy silver pistol that was originally released with Ambush.  She can't really hold it well and it appears oversized with the figure.  Baroness never really had any great accessories.  And, this release is no different.  The entire set lacked accessories.  And, Baroness included the only firearm among the 6 figures.

The Baroness mold has a short and long history.  In the vintage line, she was released just once: in her classic black outfit in 1984.  This same figure saw packaging in European and Japanese markets, too.  In the mid 1990's, Funskool acquired the Baroness mold.  They released a figure that was a direct homage to the American Baroness for a few years.  (Funskool Baroness figures are relatively easy to find in comparison to her Funskool contemporaries.)  As some point, Funskool released Rednok in the Complan Commandos line.  This was a low quality red Baroness that is exceedingly rare.  Hasbro got the mold back in 1997.  That year, they released a nicely done blue Baroness figure.  She wasn't quite cartoon colors.  Nor was she quite Cobra blue.  But, it's a nice repaint.  In 2000, the mold was redone in black and red but released as Chameleon.  Again, this is a solid figure and the color scheme was based on the unreleased 1995 Baroness that was planned for Battle Corps Rangers.  In 2002, a crimson Baroness was released in the initial convention set.  This, and her fuchsia variant, are excellent releases.  After that, the quality dropped off.  This new head debuted in the 2004 comic pack.  This figure was also blue.  But, generally, didn't stand up to the 1997-2002 figures.  The mold died with this 2005 Processional figure.  Hasbro never gave us a true cartoon colored Baroness.  Nor did they give us a grey and black version.  In short, we got two poor Baroness figures instead of something collectors would have enjoyed.  And, the new head really shortchanged the 2004 and 2005 figures even more.

The Imperial Processional Set was a dud.  It was a dud in retail stores.  It was a dud online.  It was a dud with collectors.  And, it was a dud with kids.  It sat and sat and sat.  Eventually, sets were sold at Amazon.com for around $6 each.  Even at that price, it took them quite a while to finally sell out.  Even today, these sets are relatively easy to find and Baroness remains cheap.  Because the market is crazy and many buyers are dumb, you see dealers, from time to time, get between $15-$21 for a mint and complete with filecard figure.  Left to her own devices, though, the same figure will sell between $5 and $7.  If you want a Processional set, you can get a complete one for around $30 and that's probably the way to go.  Outside of the matching figures, this Baroness has little value.  For a figure that Hasbro used quite frequently in the repaint era, the quality of Baroness releases diminished after 2002.  That's too bad as the mold has potential and cartoon fans are left without a definitive version.  This figure remains just another reminder that Hasbro of that time simply couldn't get it together when it came to collector themed releases. 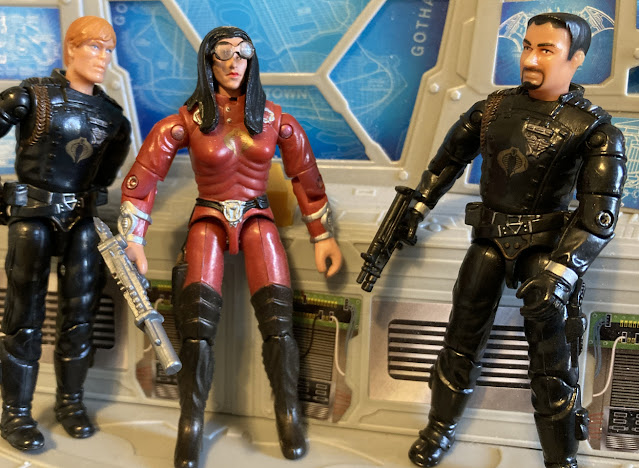 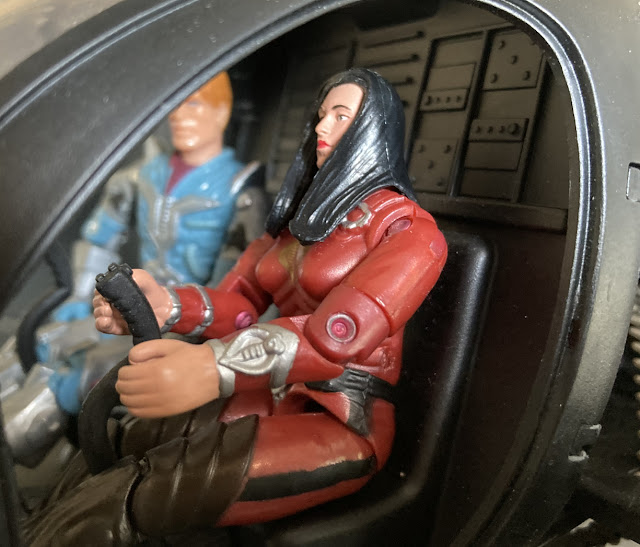 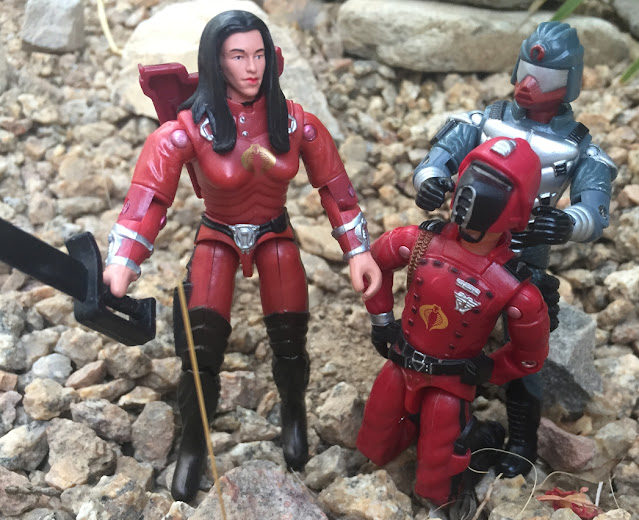 Posted by Robot_Sonic at 1:02 AM
Email ThisBlogThis!Share to TwitterShare to FacebookShare to Pinterest
Labels: 2005, Baroness, Imperial Processional, Retailer Exclusive