Around 2009, bootleg Cobra Troopers began to show up.  At first, the figures were all Cobra blue and made to match the original Hasbro release.  Slowly, though, new, exclusive color schemes began to appear.  Collectors quickly adopted the new designs and the first factory custom figures were a huge success that flourished among collectors of the era.  Around 2010, the second figure mold for factory customs appeared.  This time, it was a V1 Snake Eyes mold.  While this may seem odd, the figure was quickly painted into Cobra Invasors and Cobra Mortals and sold to collectors who craved these characters in cheaper and more useful color varieties.

One of the first figures I reviewed when I restarted this blog in 2012 was the Black Major blue Cobra Mortal.  This figure resonated with me since the Mortal character worked better with both a less ostentatious outfit and also colors that were more in line with early Cobra from 1982 and 1983.  This blue figure fit both criteria and quickly became one of my prominent figures in photos from the time.

Even today, this remains one of my favorite Black Major figures.  The blue matches the classic Cobra Trooper blue.  And, the swivel head also matches pre-1985 figures.  In short, it's a perfect match for early Joe figures.  Early Cobra was short on characters who wouldn't become main characters.  So, having a chance at some figures to represent foreign characters that could fill in middle management roles in Cobra is welcomed.

In the years since, there's been a small, vocal contingent of collectors who are against Black Major figures.  But, in the past decade, these factory customs are all vintage Joe collectors have left.  Hasbro turned their backs on that style and not even a "retro" line was enough to bring back the classic look.  So, fortunately, these figures exist to keep collectors engaged...even if Hasbro doesn't care. 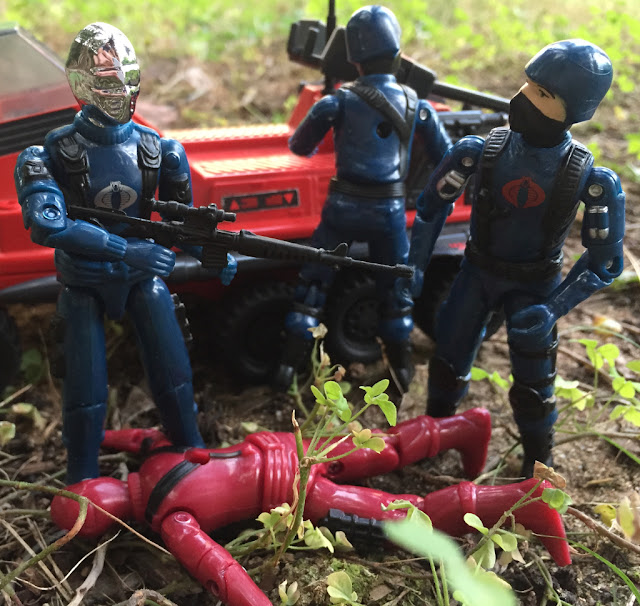