Everyone loves Zartan.  Everyone.  The original figure remains one of the best toys of the 1980's.  While everyone focuses on the Zartan figure and his amazing gear, there was a reason that the figure was sold only in a boxed set.  In the U.S., you could not buy a Zartan figure without also acquiring his Chameleon Swamp Skier.  Though the years, the Chameleon has remained an iconic piece of Zartan's characterization.  But, it has also fallen wayside to the sheer dominance of Zartan's character.  In short, it's something that is definitely tied to Zartan.  But, really has never taken on a life of its own nor been co-opted by other characters.  But, after 1984, it was also a piece of Zartan's character that rarely made an appearance.

As a toy, the Chameleon kind of sucks.  It's small.  The driver has to ride it awkwardly.  It doesn't have any weapons.  It has no defensive capabilities.  And, even new out of the box, it was really delicate and brittle.  But, none of this mattered.  The Chameleon and Zartan were peas in a pod and every kid I knew kept them together.  Zartan would always ride in on his Chameleon and outmaneuver the Joes.  The vehicle was fast, could jump and was capable of gliding over every surface. The water sprayer was impossibly strong and could wipe out an entire line of Joes.  The ink jets in the back were poisonous and could even stop a Whale as it would cover the entire vehicle and crew with opaque liquid.  This was the joy of youth.  The ridiculousness of something like the Chameleon didn't matter because it looked cool and was an essential part of one of the best figures in the Joe line.

The Chameleon established the odd blue and green color scheme as one for the Dreadnoks.  It was the first vehicle to use these colors.  Dreadnok vehicles then used the color for the Swampfire and Sears Dreadnok Ground Assault.  This creates a nice symmetry with the entire Zartan and Dreadnok set and helps it all blend together.  There was really no reason for the colors to be chosen, initially.  But, the green was likely chosen to match up with the swamp theme and that was one of the aspects of the Zartan character that most appealed to me.  There was many a time when the Joes would be hot on Zartan's tail and he's escape into the swamp or over quicksand on his Chameleon while the Joes were left with no way to cross the landscape.

So, it also turns out that I don't have anything left of a Chameleon other than some random parts.  I used to have a nice one.  But, it either got sold or is stashed in another box that I many not open for another decade.  So, the photos below show the discolored pieces of Chameleons that I have left.  I'm missing the front ski, the handlebars and the back bracket for the skids.  In short, you see junk below.  But, that was also part of the Chameleon's gimmick.  You could take it apart, toss it into an included junk bin, affix Zartan's "disguise" mask to his hood and you had a random swamp scavenger instead of Zartan.  The commercial from 1984 played up this feature.  But, it never really appeared elsewhere.  In the comic, Zartan used holographic disguises far more than masks and makeup.  As a toy, this gimmick was dumb enough to work and be somewhat fun.  And, having a carrying case for Cobra gear was a nice bonus.  But, the take apart aspect of the Chameleon is somewhat of a forgotten feature of the toy.

As a kid, the Chameleon's appeal was that it was unique to Zartan.  But, as my childhood Chameleon's fell apart, I had no special affinity for it.  In time, the Chameleon was mostly junk parts that the masked Zartan would drag through the swamp.  As the mid eighties turned to the late eighties, though, I also found value in having the Chameleon actually be junk.  By that time, I had created a world where there were lots of civilian enemies of both Joe and Cobra.  They would live in the rubble ruins of urban areas: leeches on the remnants of society that had been ransacked by war.  They would take bins of junk and try to sell them for scrap to various Joe or Cobra outfits that were nearby.  Sometimes, it was legitimate.  Other times, it was a ruse and a hidden terrorist would pop out of the junk cart and shoot somesone.  But, most often, the junk was a ruse to get someone onto a base where they'd then free a prisoner trapped in the local jail.  These one off stories brought some diversity to my Joe world.  And, they helped keep innocuous designs like Zartan's Chameleon more relevant, even after the toy was broken beyond use.

The Chameleon never appeared again.  It was included with Zartans sold in the European market.  In the 2000's, Hasbro recreated a mini version of it and carded it with a version of Zartan.  But, that was the closest approximation to the original.  Zartan appeared on a single card in Japan, but no Chameleon.  Funskool also produced a Zartan figure.  But, again, no Chameleon.  Hasbro produced over 1.7 million boxed Zartans, though.  They got their money's worth on the mold for sure.  On one level, the original was enough.  It wasn't a great vehicle or toy.  But, collectors would have loved a new version to be included with repaint era Zartan figures.

It's actually kind of hard to find a mint and complete Chameleon without Zartan.  If you do, you can spend upwards of $30 on it.  Considering mint Zartan figures go for far more, that seems like a bargain.  There's lots of little pieces and a few key parts are extremely brittle.  Plus, even the large parts are very prone to discoloration.  Hunting around might yield you a sample for slightly over $20.  But, in this Joe market, that's a pretty small disparity between dealer and open market pricing.  As a piece of Zartan, though, the Chameleon is kind of essential.  But, on its own, it has little value. 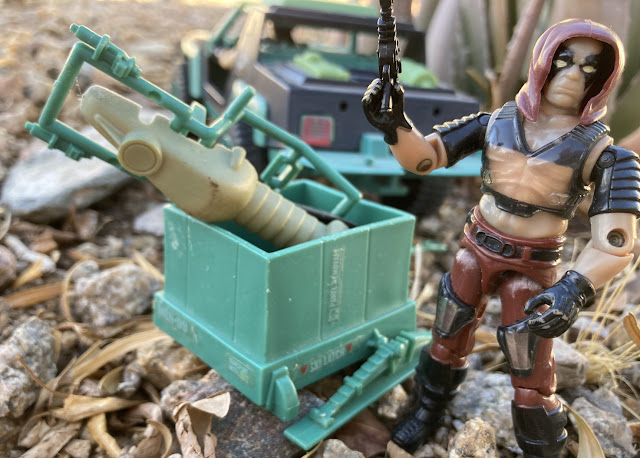 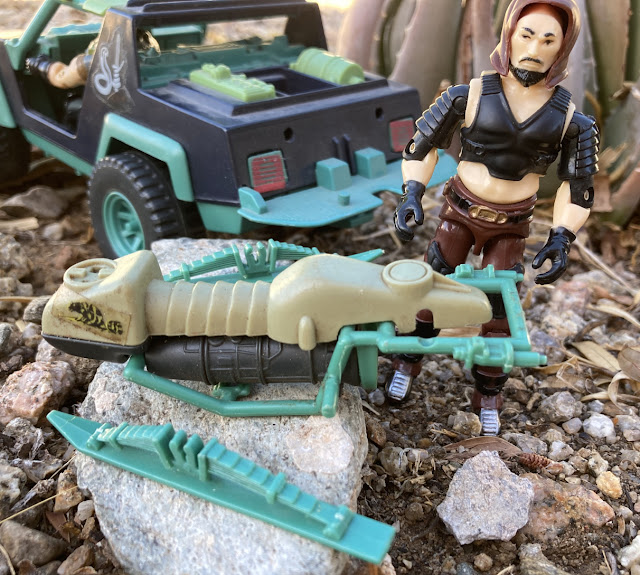 Posted by Robot_Sonic at 1:53 AM
Email ThisBlogThis!Share to TwitterShare to FacebookShare to Pinterest
Labels: 1984, Chameleon, Vehicles, Zartan