As a kid, I was very fortunate to have acquired the 1985 Sears exclusive SMS set. My dad was a fan of Sears and would go there often. As such, I was able to spend time reviewing the toy aisle since it was right next to the tools section. I spent many hours in 1985 staring at the SMS. Once I got it, it became one of my favorite toys. So, as 1986 drew to a close, I was hopeful that Sears would offer another exclusive toy offering. I was not disappointed when I found the Dreadnok Ground Assault and Dreadnok Air Assault sets. Both were repainted vehicles, but looked very cool. While the Dreadnoks weren't really major players in my collection anymore, the opportunity to acquire the vehicles was simply too good to pass up. On Christmas morning in 1986, my brother opened a Dreadnok Air Assault set. Within a few presents, I found the Dreadnok Ground Assault set with my name on it.

The Dreadnok Stinger quickly became part of my standard Cobra arsenal. Our standard Cobra Stinger had long been broken. So, having a distinct Cobra attack jeep was a welcome addition to Cobra's arsenal. However, this role was short lived. Within a few months of my acquisition of the Dreadnok Stinger, it began to fall apart. First, a door snapped when I tried to open it and it caught on the roof. Then the brush guard broke off. In it's more dilapidated condition, the Dreadnok Stinger slowly morphed into a civilian vehicle. It became the go to transportation for random terrorists, militants and criminals who would terrorize Joe or Cobra bases. Along with an A Team van, random figures would attack one of the main factions in the Joe world. It was a way for me to expand the standard Joe vs. Cobra conflict and also have Cobra act in the role of protector when their possessions were attacked.

In time, the jeep became nothing more than the shell. When I packed all my Joe toys up and put them into a storage space in our house in 1988, the Dreadnok Stinger went into a box where it would stay for almost a decade. In 1997, I dug out all my old toys. The Stinger was dirty and stripped down. But, a search of boxes of random Joe parts in storage quickly yielded most of the original parts back. With that, I put my Dreadnok Stinger back together and found a place for display. Buzzer, Ripper and Torch adorned the jeep for a while. But, when I moved to Arizona and started acquiring many figures I had not owned as a child, the role of the Dreadnok Stinger changed again.

As an adult collector, I have found the Ground Assault set to be a great match for Python Patrol figures. The green and blue jeep is a decent match for the Python Officer and Trooper. Plus, it is a contemporary match for those figures within the context of the Stinger and the original Cobra Trooper and Officer. The best part, though, is the addition of Gatilho and Relampago to the Python Patrol ranks. These named characters fit within the design years of the original Stinger, are a perfect match for American Python Patrol figures and are excellent fits with the Ground Assault set. (Especially since Relampago was a motorcycle rider.) The only reason I have Dreadnok vehicles like these in my collection these days is due to the Python Patrol connection. It is a great display and gives these toys more usefulness in my collection. (The jeep is also a near perfect match for the Bronze Bomber Scorch figure, which is a blue and green Motor Viper repaint. If you can find a few of them, they are another great crew for this vehicle.)


The Dreadnok Stinger has very brittle parts, especially the doors, brush guard and handles. The reason these are so brittle is because they were designed to change color in sunlight. The vehicle follows the trend of Zartan, Zandar and Zarana in that it will change to different shade of green when exposed to unfiltered UV rays. As a kid, this was a neat idea. But, the practicality of it is pretty minor in terms of realism. For the modern collector, the brittle nature of the plastic has made the Dreadnok Sears vehicles that much more difficult to find in mint condition.

The Dreadnok Stinger was just released by Sears in the US. The Stinger mold, though, saw use all around the world. However, this version was the only real repaint available anywhere as the International Stingers were, essentially, the same as the American version. Sadly, Hasbro really never took advantage of the Stinger's potential. While there is the black repaint from 1998, it is very similar to the standard version. Missing the Stinger in Cobra blue, red, grey or white is a sad hole in the vintage Joe line. It's likely that a Stinger repaint would have sold like crazy during the army building era of 2002 - 2005. But, that didn't happen and collectors are left with few options for Stinger variants.

Mint and complete Dreadnok Stingers are very expensive. In recent years, perfect samples have climbed close to $200. This is a combination of the vehicle's rarity, collector interest in anything Dreadnok and the general upsurge in pricing for any vehicle that is derivative of the original VAMP. The reality, though, is that the vehicles were not produced in great quantities and the plastic used for them is very brittle and tends to discolor. The doors, brush guard, steering wheel and hand rails will break with little usage. (The brush guard and steering wheel are hard enough to find on their own rights!) So, mint specimens are not easy to track down. Years ago, the Joe market was not overly efficient and deals could be had on items like this. These days, though, collectors have largely caught up and most are looking for the same missing pieces. Items like the Dreadnok Stinger that are cool, rare and easily broken tend to be highly sought after. Whether time will ease or exacerbate this remains to be seen. I'm glad I have these items and have had them since childhood. Without that connection, it's unlikely that they would be part of my collection today. 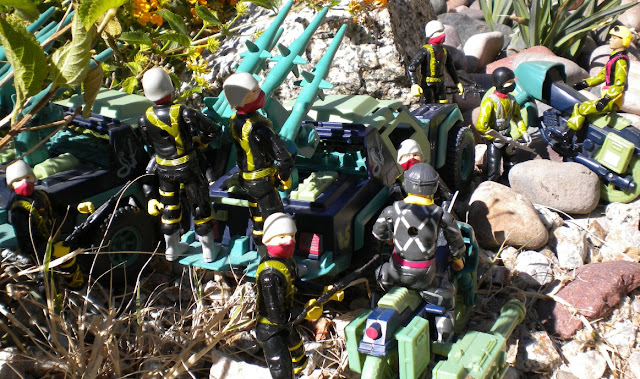 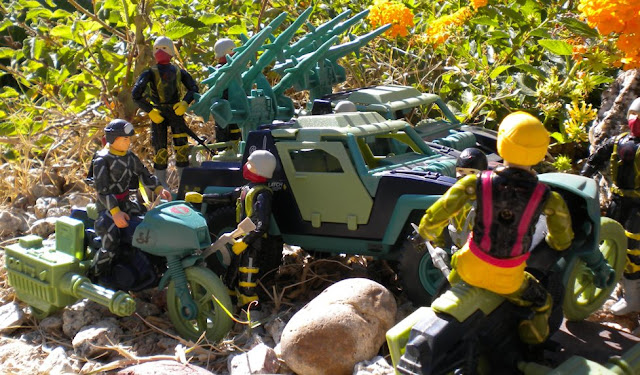 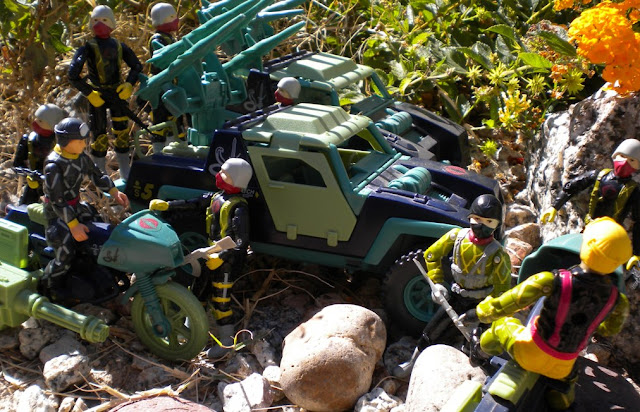 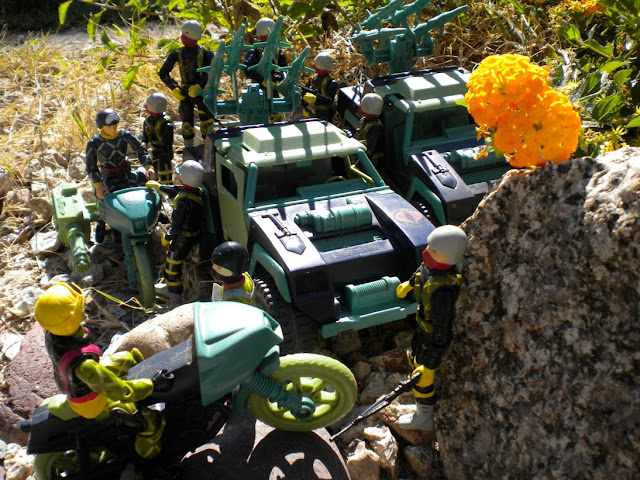 Posted by Robot_Sonic at 10:39 AM
Email ThisBlogThis!Share to TwitterShare to FacebookShare to Pinterest
Labels: 1986, Dreadnok, Retailer Exclusive, Sears, Stinger, Vehicles