In 1983, either my friends or I had just about all the new G.I. Joe figures that were released that year. Back then, it took just about the whole year to finally get all the new figures and vehicles that were released. There were very few things I didn't have by the fall of 1983. Among them were the Skystriker, Headquarters, and the Dragonfly. There was a rumour circulating that a new Kohl's store had Dragonflies in stock. I convinced my mother that I had saved enough money from mowing lawns that summer to be able to buy it. After several days of me badgering her, my mom relented and took me to Kohl's. Once there, I finally added the awesome Dragonfly helicopter to my collection. While we were there, though, my mom was pestered by my brothers who no money of their own with which to purchase anything. Once again, my mom relented and allowed each of them to buy one figure. One of my brothers purchased Torpedo, who was one of the two figures we were missing at that time. My other brother purchased the second figure we were missing: Tripwire.

Tripwire is a very simple, but still cool figure. He didn't come with any guns, but his mines, pack, and mine detector more than make up for that oversight. (Of course, if you check out the catalog from 1983, it shows Tripwire holding a pistol. From the best I can see, it looks like the pistol that came with Destro from that year. Whether he was originally intended to come with this, or if it was just an oversight, is unclear. It does show, though, that someone, somewhere, sometime felt that this guy should have had a gun.) Like Alpine, Airtight, and Barbecue from later years, Tripwire was the perfect support figure that began the tradition of strong figure classes after the initial, generic year of 1982. He is the type of figure that you only need for certain missions, but is essential for when you do need him. He was never a figure around which you could build adventures, at least not to the extent you could with many of the other figures from his year, but he is a figure that works perfectly as a background character who is only called upon when he is absolutely needed. He is the type of figure that made the Joe line so memorable. Had the line only been the headliners, interest would have quickly faded. It was the addition of the background characters and figures that really allowed for expanded play. Joe offered something for everyone. That was the single most important reason behind the line's long term success. (And a lesson that Hasbro needs to remember with the new releases. We don't need repaint after repaint. Variety is the spice of life and will keep the line profitable for much, much longer.)

As a kid, I never really used Tripwire. I never liked playing with his mines as they were easily lost if you used them outside. For that reason, this guy was very under appreciated by me for most of the life of my original figures. In later years, though, Tripwire found use as the driver and crew of my APC. He just seemed to fit that role. (Of course, the fact that both my original Tripwires had broken crotches helped relegate them to less than glamorous duties.) He also, though, found use as prison guards. (It's odd how most of my figures of which I had more than one eventually found themselves in this role.) The armour on his chest was kind of cool and lended itself to the type of figure that would be a guard of some type. Now, though, I think Tripwire will see some use in his intended specialty. I still like the figure and the look is very nice. He is also one of the few figures in the line whose accessories were never improved upon. No other mine detectors were ever released, so it gives Tripwire a real sense of uniqueness. It also, though, lends itself to a new figure for the 2001 or 2002 assortments. I think a redone mine detector, who doubled as E.O.D. or something similar, could be a very cool figure that many fans would like to see in the new figures. Time will tell, I guess.

Tripwires are pretty easy to find. He was a pretty ubiquitous figure in just about everyone's collections. However, he has a brittle crotch that is easily broken, face and chest paint that chips under very little stress, and accessories that were not only easy to lose, but easy to break. All this adds up to a figure that takes some searching for whom to find a mint, complete specimen. Still, he's pretty cheap. I just paid $10 for the figure you see in the scan below. Frankly, I overpaid for him. He can easily be had for $6-$7 instead. Still, to me, he was worth this much as I've wanted one in this condition for quite some time. He is a figure that I recommend having as he is a cool specialty figure with great accessories. Tripwire is also one of the easiest and cheapest '83 figures still out there. His lack of a gun make him less desirable than the other figures from 1983. Also, he and Torpedo were the two '83 Joes who were not showcased in the first commercials for that year's new figures. Fortunately, this allows the modern collector to capitalize on this figure's lack of notoriety. While I don't foresee this guy ever becoming overly popular, I think he will eventually have his day. (Heck, one of the proposed names for the next wave of new Joes for 2001 was Trip-Wire. While that name has now changed at least 2 or 3 times, perhaps, this mold may yet make a comeback.) I'm happy with my new Tripwire. I have a feeling that anyone else who adds him to their collection will feel the same way.

Tripwire is cool, but I only need his Listen and Fun variation. If you have one of those that you are willing to trade, email me. 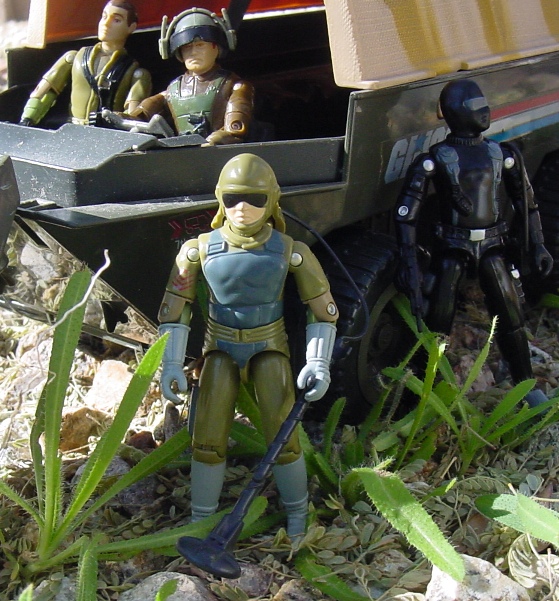 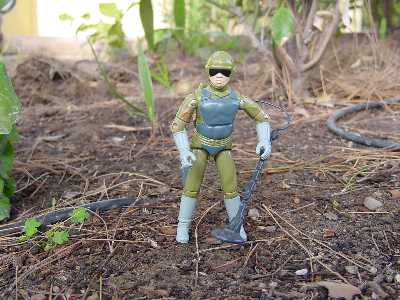 Posted by Robot_Sonic at 1:19 PM
Email ThisBlogThis!Share to TwitterShare to FacebookShare to Pinterest
Labels: 1983, Tripwire