A couple of months ago, I profiled the Night Force Repeater. In that profile I stated that while the Night Force figures were nice, they were rarely improvements upon the figures' original versions. While Repeater was an exception to that, most of the figures are not. Another figure, though, whose specialty is very cool, has a good mold, solid accessories, but was in desperate need of a new colour scheme is the Joes' swamp fighter: Muskrat.

Back in '88, I wasn't buying too many Joes. I picked up a Tiger Force Roadblock and a Hit and Run, but that was about it. I've always liked swamp fighters, though, and thought that Muskrat would be a figure I would enjoy. When I finally saw one, though, my enthusiasm waned into genuine apathy towards to the figure. The color scheme, while nice, was just too bland and lacked the chutzpah factor that would have motivated me to make a purchase. Don't get me wrong, I like green cammoed figures, but the original Muskrat was just too bland. He just sort of blended together and his features were washed out in the similar colors. As such, I passed on Muskrat and didn't actually own one until the late '90's.

I never really thought much of Muskrat until a few years ago. I saw pictures of the Night Force version and thought it would be a neat figure to own. Alas, I just didn't put it near the top of my priority list and allowed this figure, like all the Night Force figures, to remain unacquired for many years. A couple of weeks ago, I finally managed to snag one of these guys for a decent price. After I received the figure, though, I realized that the small amount of wear the seller had described was actually a bit greater than his original description. Still, I feel like I paid a fair amount for the figure I got. Had it been in the condition I was expecting, then I would have gotten a great deal. Oh, well. Anyways, as soon as I got him, I remembered why I had wanted this figure. The not quite black grey of his basic uniform really allows for the military green to showcase the figure's detail. The black pants also allow for some offsetting color that brings this figure to life in a way the original never could. It is for these reasons that I consider the Night Force Muskrat superior to the original mold.

The one facet that nearly caused me to break down and purchase a Muskrat figure back during his original retail run was his gun. He has a shotgun that just works perfectly for dozens of different figures. Fortunately, this gun is very easy to find since it was offered on several weapon trees that came with '93 and '94 figures. It's this gun, though, that brings me back to this figure. His weapon really suits him. Much after '89, accessories were cool, but they didn't fit the figure the way many of the earlier accessories had. Muskrat is one such figure. I have no problem envisioning him stomping through the swamp with his shotgun always ready. For some reason, the weapons fit the figure in a way that is rare in the Joe line. I think that's just another reason why I like this guy so much. He works very well in his environment. Of course, though, that limits his usefulness to me. That, though, keeps this guy from getting played out. Many figures hold my attention for a couple of weeks, months, or even years. By and by, though, the figures I use most now, become the forgotten figures of tomorrow. That's why I can often write so much about so many individual figures. Most Joe figures have had their time in the sun in my collection. It is the specialists, and niche guys, though, who always remain constant. I won't have an underwater mission without the '94 Shipwreck but he only goes on missions of that type. That way, the figure stays fresh. My hope is that this version of Muskrat will do the same.

I've said it before and I'll say it again. Night Force figures are tough to find. Unlike the Repeater who was later offered via mail-in, Muskrat only saw production as an exclusive. The nice thing, though, is that his shotgun was still black and the black machete was released on the generic weapon trees of the line's final years. His black surfboard, though, poses a unique challenge. Because of this, Night Force Muskrats can get expensive. Fortunately, he isn't as sought after as a couple of the more high profile figures such as Outback and Shockwave. Still, mint and complete, this guy will set you back $25-$30. Again, that's way too much. He simply isn't worth that much, though the market seems, and has seemed for quite some time now!, to support that price on a consistent basis. It is frustrating, but one of those things that keeps the Joe collecting hobby more challenging. If every figure were easy to get and very cheap, there wouldn't be much fun in this. When a decent figure like Muskrat starts costing the same as other, much cooler figures, though, you know you've entered into a time when your days on having an incomplete collection are drawing to a close. It's a reality I'm not sure I want to face, but with the new releases and tons of foreign variations (many made cheaply available to you by several excellent fan based dealers) thrown into the mix, I don't see my days of searching for Joe figures coming to an end anytime soon. If they can keep many of those figures at least as good as the Night Force Muskrat, you can be sure I'll be around for quite a while!

I would like a better example of this guy. I'm also after a couple of other Night Force figures. (If I haven't profiled them, then I probably need them!) If you can help, email me. 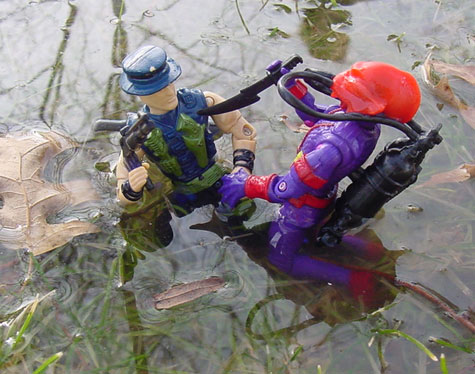 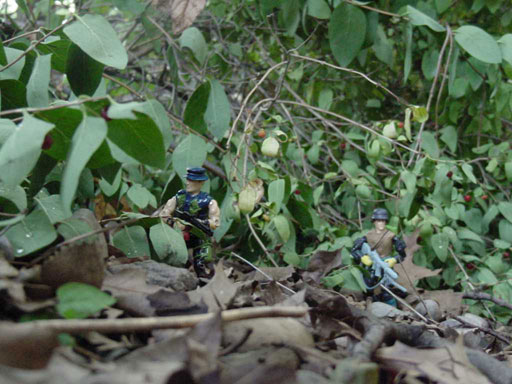 Posted by Robot_Sonic at 11:54 AM
Email ThisBlogThis!Share to TwitterShare to FacebookShare to Pinterest
Labels: 1989, Muskrat, Night Force, Retailer Exclusive