A long time ago, I profiled the best Cobra diver figure ever offered from Hasbro, the original Eel. Since then, I've also offered my thoughts on the original Undertow and the only incarnation of the Hydro Viper. Besides the newly released version of Undertow, I've covered just about all the Cobra diver figures. However, there is one figure that has eluded my profiles for some time. Until recently, I really had no inclination to ever profile him. However, I saw the picture of the Funskool Eel at SmallJoes.com and was reminded of the American version of this figure. A couple of weeks later, I received a carded American '92 Eel as part of a lot. I opened this figure, as I do most of my carded purchases, and was amazed at the mold. I had a couple of the '92 Eels packed away but had never really given them much thought. Now, though, I've decided to finally add the figure that is definitely the second most obscure Cobra diver ever released: the 1992 Eel.

There are a lot of things that should be wrong with this figure. First, he is neon. He is not a little neon like the '94 Stalker. He is all neon. The thing is, it works. This guy is a diver. Bright colors are forgivable on three or four types of figures: astronauts, divers, rescue troops, and firefighters. Because of this, the figure works. The Eel's second problem is his lack of accessories. The original Eel came with the diver accessories against which all future divers have been judged. This guy only comes with a lame, neon speargun that looks like a knockoff of Monkeywrench's original gun, 2 flippers, and a surprisingly cool robotic shark that houses a missile launcher in his mouth. Beyond the flippers, there is nothing really redeeming about the accessories and no amount of propaganda will take away from the fact that they mostly suck. However, it is the figure's mold that makes up for this. This figure is large and bulky. It makes sense that he could have recycling gear built into his suit. While it would have worked better to have it be part of the mold, like on the '94 Shipwreck, it still allows me some leeway as to the whereabouts of this diver's air tanks. Aside from the figure's bulk, he has these ridges molded onto his arms and legs. It was this feature that was most intriguing to me. I use these as razor sharp appendages that make these guys close quarter, underwater combat specialists. While the original Eels and the other divers are more combat oriented. This version of the Eels jumps into waters infested with opposition divers and takes them out with slashing blades rather than the the traditional spear guns. These guys are the ruthless division of the Cobra diver corps. Less highly trained, but more bloodthirsty.

1992 actually gave us some very nice figures. Joes like Shockwave, Ace, and General Flagg were great foils against Cobras like the Headhunter and Flak Viper. Most collectors, though, write off any year much past 1991. (Some write of any year past 1987, but that's another story!) It's a shame. There are tons of great figures, many of them profiled throughout this site, that were released in Joe's final years. While this guy may not live up to his 1985 counterpart, he is still a great figure. Rather than get caught up comparing eras, I like to take each individual figure for what it is: a figure. If a figure is good, who cares whether it's supposed to represent a better figure from years before? I think that's why I get such great joy out of my collection. I don't get hung up on what's realistic, or who's better, or what came first. I just focus on what's cool to me. It's a strategy that has served me well for many years now and not one that I see myself changing. It's just something to think about.

After its two uses by Hasbro, this mold was sent off to India where Funskool released it in colors similar to the '92 Eel for many years. Production stopped around 2003 and it is likely that the mold was returned to Hasbro. As such, this figure would make a great candidate for re-release. Colored like the V1 Eel, I think this mold would get a lot of collector attention and would make for a worthy substitute to the long missing V1 Eel mold. Perhaps that will one day come to pass. Until then, we can enjoy this figure in all his neony goodness.

1992 Eels are not hard to get. You can usually get them carded for under $10. Right now, this is the easiest way to find them. In my days of prolific Cobra army building, though, I've only managed to get 3 of these guys. Like most '92 figures, you have to really search for them before you can acquire significant amounts of the figure. However, in the first paragraph I mentioned that this guy is the second most obscure diver in the Cobra ranks. Who is the first? Simple, it's the 1993 version of this figure. He is nearly identical to this figure, only he is less neon. (Check YoJoe.com for details.) That figure is incredibly tough to find. I've never even seen one. However, since it is nearly impossible to discern the '93 from a '92 until you have them both in front of you, they may not be as difficult to find as this might make it seem. Either way, though, this figure is definitely one of the most unsung figures in the entire line. He is a guy that I've grown to like. He is certainly not the original Eel, but I've never even tried to compare the two. The figures are too different and serve much different purposes. Both have important homes in my collection and can coexist in your collection as well. 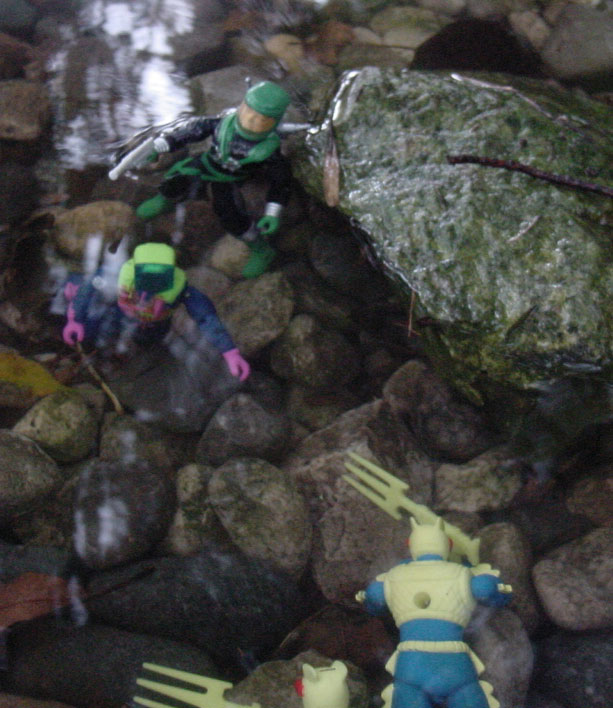 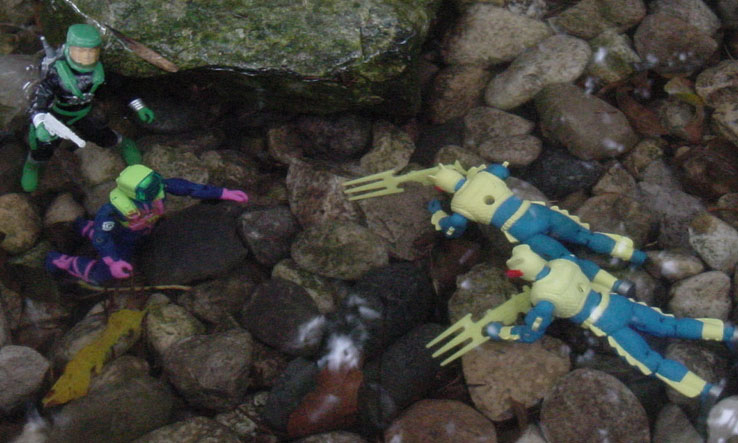 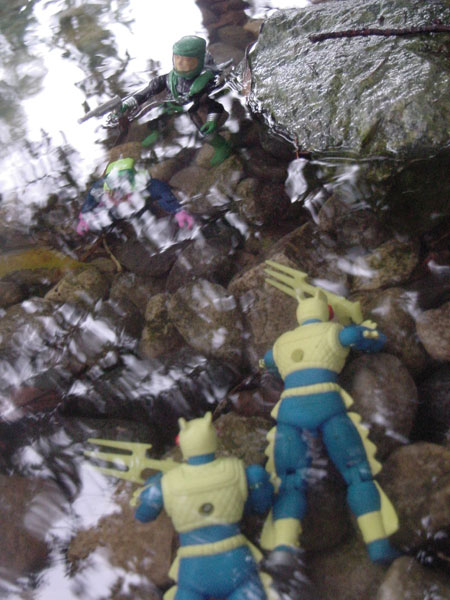 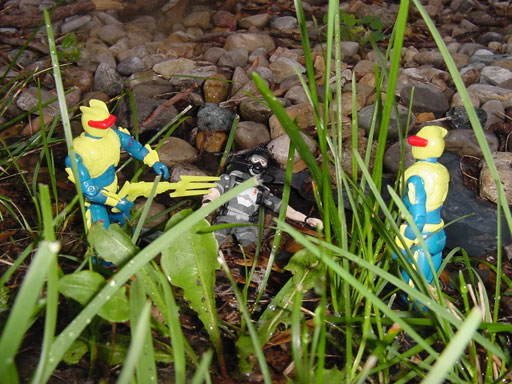 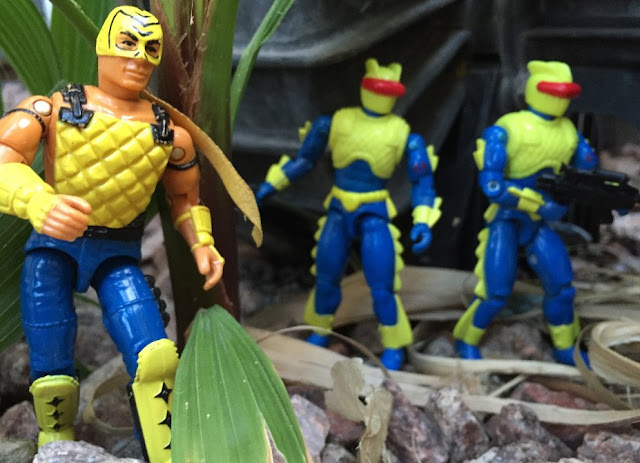 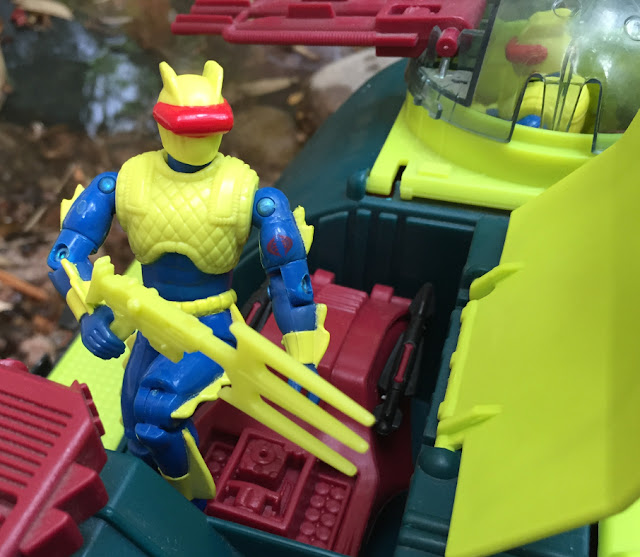 Posted by Robot_Sonic at 12:00 PM
Email ThisBlogThis!Share to TwitterShare to FacebookShare to Pinterest
Labels: 1992, Eel