Fans of this page know that I'm a Star Brigade junkie. I've profiled several astronauts, both Joe and Cobra. It's been a while, though, since I graced the Forgotten Figures section with a Star Brigade figure. I've been wanting to showcase the one area of Star Brigade that I've been missing, the Lunartix empire, but have not had the loose figures of which to take pictures. I've said before that I've got a complete set of carded '94 Star Brigade figures, but I only had Carcass loose. However, a couple of weeks ago, I got a chance to add this much less seldom seen version of Carcass to my collection. It is from Mexico, and one of two exclusive color schemes done to Lunartix figures that were only available down there. While the Mexican Predacon is cool, I like the American one better. That is not the case with the figure you see below. While both versions of Carcass leave something to be desired as figures, it is the exclusive Mexican variation that is much, much cooler to see.

I'll just get one thing out in the open right now. Most Joe collectors are not too happy about the inclusion of space aliens into their beloved line. Personally, I don't think it was the direction the line needed to go in order to perpetuate itself. However, I do believe that Hasbro had its reasons for doing this. Also, the fact remains, these three Lunartix aliens are part of the G.I. Joe line. To some people that's about as appealing as the fact that Street Fighter is a part of the line is to me. The point is, the debate about Star Brigade, its place in the line, and whether or not it destroyed Joe has been done to death. Of course, this is my web site so I get to spout off about my opinions. If you don't want to hear them, just skip the next paragraph.

Personally, I think that Star Brigade and G.I. Joe were going to take two different paths in 1995. From all indications, Hasbro was going full tilt into the Star Brigade concept. Several concepts and prototypes for the proposed 1995 line have survived to this day. They show a continuation of the traditional Star Brigade concept, more Lunartix aliens, the infamous Manimals, and a new concept called the Replicators that would have made the Manimals seem plausible. Add to that the fact that the Star Brigade logo was becoming more prominent on the packaging and there is a lot of evidence that makes me think that had Joe survived into 1995, Star Brigade would have become its cousin rather than its brother. The 1995 Battle Rangers line was taking Joe back to its military core. I think that line would have kept going under the G.I. Joe banner while the Star Brigade stuff would have become a more distant cousin that just shared a few old characters until the newly developed characters who were just for Star Brigade had a chance to be established. I will say that the only evidence I have of this is my own observation. However, I would like to hear different interpretations. Email me with any comments or commentary you might have about your opinions of where the line may have gone. Please don't email me just to say, "Star Brigade sucks." At least show some originality. ;->

Frankly, I like these aliens. Their place in the Joe universe is suspect, but they are very cool figures. Of the three, Carcass is the weakest. His arms are just a "poseable" mess of rubber. You can do much with them beyond what you see in the photo below. Aesthetically, this guy is cool. The black body with the colored organs inside the translucent chest piece is a start contrast that shows off the level of detail given these figures. Hasbro spent some bucks to design these guys. It's a shame that so few people have them, or even know about them, now. This Mexican variant showcases the figure's features in a way the American version can't. The red American Carcass simply all blends together and doesn't really make you stand up and notice him. The Mexican version is the most visibly striking of all 5 variants of the Lunartix figures. It's just a shame that the arms take away so much of the playability.

The thing about all the '94 Star Brigade figures is the colors. As you can see in the picture below, these guys utilize some color schemes that are both pleasing to the eye and visually bold and striking at the same time. The vibrant oranges, reds, greens, and blues set against subtle hues of black and grey give these guys a unique appearance that is not found on any other set of figures. On astronauts, you can get away with that. I think that's the single most important reason of why I so like the '94 Star Brigade figures. They look great out on display. It's also why I couldn't, even after I had made up my mind otherwise, bring myself to open my carded set. The visual effect of them all together is just much stronger than any other group of carded figures in Joe's history.

Modern collectors have since learned a lot more about the origins of these Mexican exclusive aliens. It seems that the Mexican exclusive figures were the first figures produced for the Lunartix line. However, these colors that came back from the factory were so different than the card art, Hasbro nixed them, went back to the factory and got the colors right. However, there were enough of these figures made that they warranted release. So, Hasbro dumped them wherever they could. All of the Mexican figures are on American cardbacks. Hasbro simply taped a Spanish language sticker over the essential parts and sent the figures off to Mexico where they sold as overstock.

One other thing has happened in the nearly 6 years since I first visited this figure. Mexican Lunartix figures have gotten expensive! Recent sales of the Mexican Predacon put a carded figure well over $100 and a mint, complete loose figures near $60. Carcass trails a bit behind but carded Mexican Carcass figures now fetch over $60 and loose, mint complete figures will break $30. The reality is that these figures probably saw a VERY small production run. It was surely a fraction of the American Lunartix and it is generally accepted that they were limited to 10,000 pieces. As such, you are going to pay a bit more of a premium to add these figures to your collection today.

This figure isn't too tough to find. He usually appears for sale every other month or so. He can easily be purchased MOC for under $20. I know that the American Carcass was shipped 3 per case in his initial run, making him the most common series 2 Star Brigade figure. I don't know if the Mexican assortments kept the same ratios. At any rate, this guy is Star Brigade and Star Brigade means cheap. No one really likes these aliens (Just look at how the Manimals now clog the pegs. Ouch!) and so there are very few people looking for them. In fact, most toy dealers who have these guys aren't really Joe dealers and have no idea of what they have. I've gotten Mexican carded Star Brigade figures mixed in with American Star Brigade figures on more than one occasion. To be honest, I think most of these guys, like the Chinese exclusive figures, are now in America. That's nice since it allows you to pick up some different versions of obscure figures with relative ease and inexpense. Those are the types of foreign figures I like. They are unique and eye catching, but they won't ruin your budget. Now, if I could only get some Brazilian figures the same way!

I like this guy, but have the only one I want. If you have a Mexican Predacon that you want to get rid of, let me know. 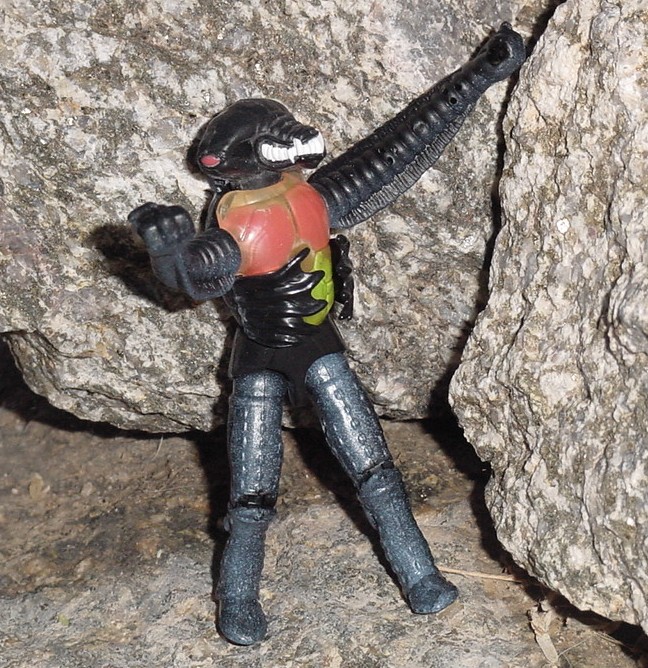 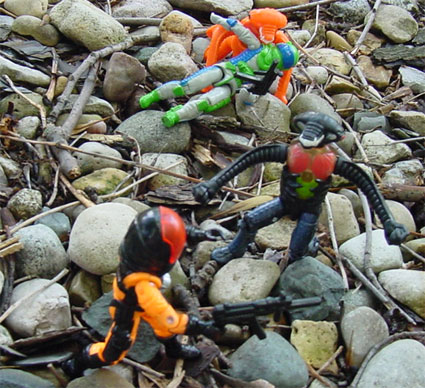