Back in around 1994 or 1995, I made a trip to Trader's World flea market near Dayton, Ohio. I went there with my roommate to find some old Atari 2600 games that he was going to use in his "lair". (Don't ask!) While there, though, I rummaged through just about every toy dealer's table I could find. Back then, I only had my childhood Joes and was missing many, many figures. At one table, a guy had a huge box of figures for $1 each. In here, I found an '83 Ace and a Stretcher figure. When I dug them out, the proprietor of the table promptly launched into a lecture of how only "mint" figures would ever have any value. He pontificated for about 10 minutes while I searched for more Joes I needed. When I paid, he asked if I thought I was going to get rich selling the figures I had just bought. I replied, "No. I just think they'll be fun to play with." and walked off. At any rate, it's just a random memory of my first acquisition of the figure to be profiled here: Stretcher.

That first Stretcher figure I bought had no accessories and was kind of beat up. I had also bought an original Dusty that day, so I decided to give that original Stretcher Dusty's gun. I liked the look and teamed this guy up with the '92 Wild Bill, '94 Flint, Mercer, and the'86 Hawk. They were a small band of mercenaries who were stuck in Cobra controlled land and had to fight their way out against the hordes of Vipers and Crimson Guard Commanders. It was great fun and lead to my greater appreciation of this figure. In fact, he became such and integral part of my everyday Joe world that back in '97 he was part of a team of mercenaries and terrorists who hijacked a Tomahawk chopper to escape the raiding hordes of Range and Alley Vipers that has lead to a storyline that still continues to this day. That's the type of versatility I liked to get out of figures back then.

In early '99, I finally acquired a mint, complete version of Stretcher. At that point, I took the figure for what he was: a medical specialist. Stretcher isn't a medic, he's the guy who pulls the wounded out of the fire and gets them to proper medical attention. It's a cool specialty, and one that makes for a more exciting figure than a typical medic, but still not one that would make this guy a necessity to any collection. Stretcher is from the same vein as guys like Airtight, Alpine, Barbecue, and Topside. He is a supporting figure who is necessary in certain situations but isn't a guy who you would always take along with you. Again, he's that supporting figure that made the line great. The only problem is that the entire Joe year of 1990 was full of supporting role players like this guy, Bullhorn, and Pathfinder and didn't have the strong, main characters that were the hallmark of the great Joe years.

Because of the ever evolving nature of my Joe collection and the focus I apply to it, Stretcher's star has faded. I pulled out that old, beaten up figure the other day and realized that I haven't used him in almost a year. Like most collectors, I no longer have the time to mess with my collection like I did only a few years ago. Life catches up with you, I guess. Hopefully, one of these days when I get all resettled, I'll be able to pull out some old figures like that Stretcher and use them again. Until then, though, this figure holds some fond memories for me. For me, a figure gets played out. Once I've had a guy for a couple of years and have used him heavily, I look for something new. I think that's why the figures that I tend to use the most are the ones that I have most recently acquired. For now, Stretcher has had his moment and I'm looking forward to using some new figures in my collection. My collecting cycle is a big circle, though, and I will, one day, come back and use this figure again. I just hope it's sooner than later.

While the Stretcher character has gotten no love from the modern Hasbro, his mold has. The Stretcher mold except for the head was used in early 2002 on the Sideswipe figure. That figure, though, saw a very short production run that was only available online. However, if you missed that, the mold was used in its entirety in 2004 as the Anti Venom Sgt. Lifeline. This figure is significant as it changes the race of Stretcher's head to a Caucasian. It is also significant as there exist many pre-production light blue Anti Venom figures that feature Stretcher as an African-American. So, at some point, Stretcher was probably planned to return but was scratched in order to give the Anti Venom set a bit more star power by including the more well known Lifeline character. The good news about both these figures, though, is that they included all of Stretcher's original accessories. So, if you can't find a Stretcher, you can pick either of the later figures and get the full complement of accessories.

Apparently, Stretchers can be pretty tough to find. I know many people who are looking for him. Since he's not at the top of most people's list, though, there isn't a great demand for him. Still, he, like most of the '90 figures, came with tons of accessories that are both very breakable and very losable. I managed, through the acquisition of three separate figures, to finally put together one complete Stretcher. It was some effort, but fit in with my collecting strategy at the time. Now, you can still buy mint, complete, and sometimes even carded, Stretchers for under $10. It is a price well paid for a figure of this quality. I love 1990 figures because they are the true forgotten year in Joedom. As such, you can get great figures for a very small price. Perhaps, with publicity like I give them, the days of cheap '90 Joes may come to end. Still, it will be a while. Just don't wait too long to fill those gaps in your collection. You can be sure, that if you do, it will cause you much more grief down the line. 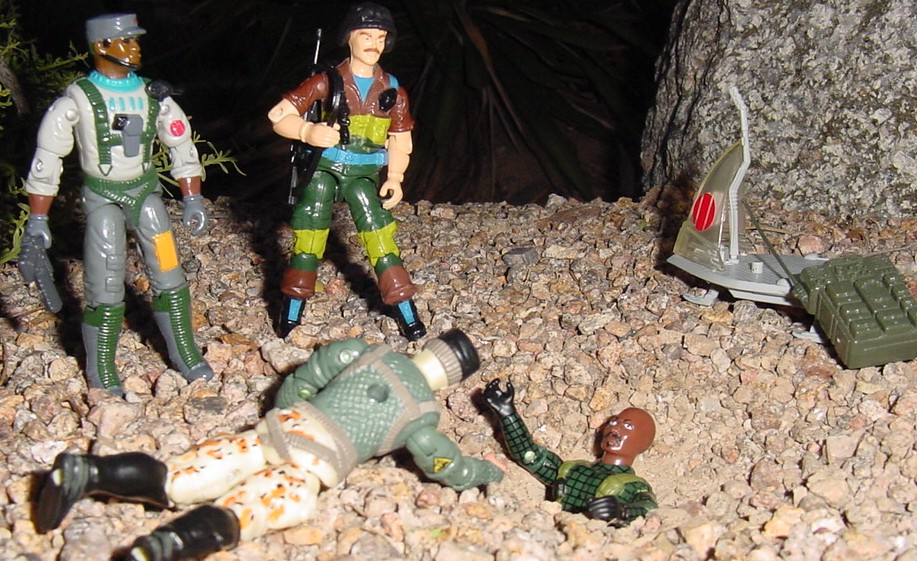 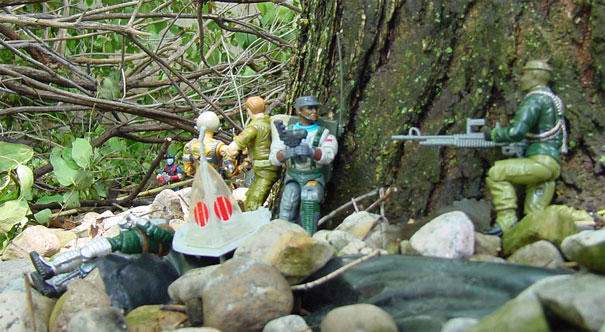 Posted by Robot_Sonic at 11:30 PM
Email ThisBlogThis!Share to TwitterShare to FacebookShare to Pinterest
Labels: 1990, Stretcher