I've profiled race changing figures before. Excellent Brazilian figures like Flying Scorpion and the Black Vulture used a race change to create a new character of remarkable contrast to the person represented by the original mold. However, both of these figures utilized relatively minor characters from which to draw their molds. As such, the figures don't look out of place. In this case, though, the race change has been applied to a classic figure whose character did not change. What we are left with is a truly bizarre, yet strangely cool, foreign repaint. While not the most major character to ever have his race altered by a foreign toy company, the Funskool Iceberg is one of the most remarkably different figures who, beyond one simple change, is the same. While that may sound a bit odd, looking at the photos below will give you an idea of how stark a contrast this Caucasian version of Iceberg is from his African-American original release.

Funskool has offered us race changing figures before. Why they started this practice, though, is a bit of a mystery. You see, the first wave of Iceberg figures produced in India were actually of African-American persuasion. Shortly after this, though, the figure's complexion was changed to the Caucasian figure you see below. This is odd for a number of reasons. One could say that African-American figures may not be popular in India. However, Funskool currently produces a Roadblock figure whose race remains as it should be. Perhaps the change was made for more economic reasons. It could be that the plastic needed to create an African-American figure is more expensive or more difficult to find. Therefore, Funskool chose to eliminate it from as many figures as possible. Again, though, the existence of Roadblock in the Funskool line really makes this implausible. I guess the real reason is buried in some Funskool executive's head. Whatever it is, though, I would like to know.

In my collection, the Iceberg character has long been a major player. Back in '86, my focus was on arctic missions. Cobra was spending all of their energy in arctic locations and the Joes found their cold weather members of the team to be the most important. As such, Frostbite and Iceberg became the two most influential Joes in most situations. (I have always used Snow Job as a Joe army-builder and not an original character.) They lead legions of American troops against Cobra's highly trained Snow Serpents and were quickly promoted for their success. From there, Iceberg went on to become a full ranking general while Frostbite went into politics, though his career has been rocked by scandal. To this day, I see Iceberg as more of the arctic leader of the Joes rather than a true grunt. He still comes out to fight, from time to time, but is now more mired in the duties of being a high ranking officer and does not have the time to remain true to his combat roots.

This figure, though, gives my Iceberg figures a new life. He is starkly different enough that I can use this Iceberg figure as a faceless Joe greenshirt who helps flesh out my large army of V1 Snow Job figures. He does not infringe upon the characterization that I have given to Iceberg but still allows me to enjoy the mold without the encumbrances of the backstory I have chosen to give the character. As this mold is highly detailed and indicative of the time and effort that were put into the Joe line in the mid-'80's, that is a very good thing. As I use this figure as an army builder, it is very easy to put him into action in a variety of situations. Even as a new character, though, this figure is so different from the American Iceberg that you could easily put them in a scene together and not have to worry about them being confused for the other.

There are many variations of the Funskool Iceberg. As I said earlier, the first version of this figure made by Funskool was African-American. That figure was also exported to Egypt and sold there under the Nilco name though the figure was manufactured by Funskool. Shortly after this, though, Iceberg's complexion was changed. Of the Caucasian figures, there are several paint variations. The most noticeable, beyond the changing skin tone, are the torso color variations. The version you see below is very similar to the American Iceberg. He has blue and green trim. Other Funskool Icebergs also have the trim in pink and red. These figures are very odd in appearance and are more in line with what many people associate with Funskool. Beyond these major differences, there are also several variations on the figure's goggle trim. I think I've seen at least 5 variations of this figure. Knowing Funskool, I would guess that there are probably at least 5 more still out there just waiting to be discovered.

Finding a Caucasian Funskool Iceberg isn't too tough. Many dealers have carded samples for sale in the $15-$25 range. Seeing as how this figure hasn't been produced since at least 1997 (when the mold was returned to Hasbro), that's not too bad of a price. With a little searching, you can even pick up three or four different variations of this figure all in the same price range. As this figure is a significant variation and is very well done, I highly recommend taking advantage of this pricing and acquiring this figure now. He has been an excellent addition to my collection and I think that, even though he is a never popular arctic soldier, you will like him as well. Iceberg personifies many of the qualities I look for in foreign releases. Being able to still find figures that are so different like he is at still affordable prices is becoming harder and harder to do.

I'm always interested in out-of-production Funskool figures. If you have any available, please let me know. 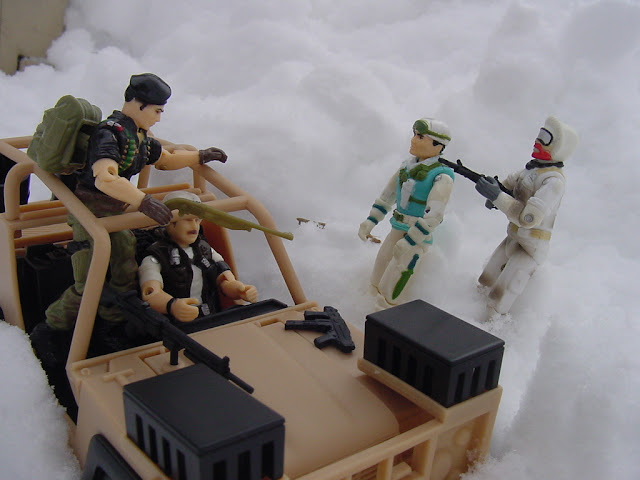 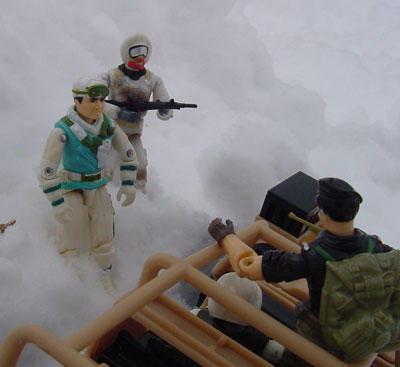 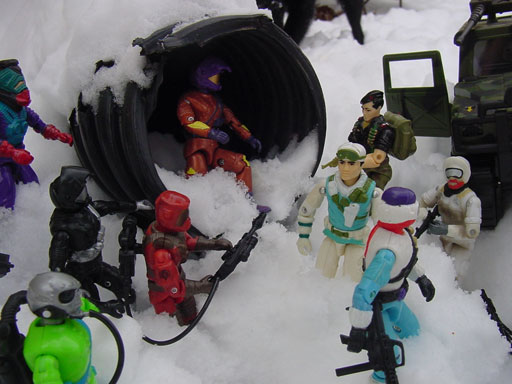