I'm not a big fan of the early Joe figures. Sure, they have their place in history and are worthy of respect for that fact, but the reality is that they were greatly paled by the later Joe releases and were largely made irrelevant by subsequent, better detailed figures. As such, though the years, I have profiled very few of the original figures. This is somewhat a shame as these molds have had far more interesting lives than those of most other figures even if their actual designs have become dated. The subject of this profile, though, is the first true repaint of a character that was offered in the Joe line. For that, he is significant. But, it's what became of this figure in modern collecting terms that is the figure's true legacy.

In 1982, Grunt was the face of the Joe line. It was his card art that adorned most non-toy Joe merchandise and it was his image that came to represent the line as a whole. As such, it's fitting then, that Grunt was also the first character in the line's history to get the repaint treatment. (This isn't to say that Grunt was the most important or interesting character, he was just the guy who appeared on a lot of non-figure merchandise in the early years.) The Glider's were heavily hyped toys and it made sense to have figures that were at least somewhat known as the pilots. (Never mind that it made no sense for a ground pounder to be the glider expert.) The new color didn't really fit in with the color of the Glider, but it did offer something very distinct from the original Joe colors.

Oddly, this was one of the first obscure figures I ever owned. While just about all my friends had the standard, retail Joes in '82 and '83, the glider figures were less common. As far as I can remember, the reason for this was that my parents purchased the Falcon glider for my brother. Within a few hours, he had broken it to the point of uselessness. The shoddy construction simply could not withstand the hearty play of a 7 year old. My parents spread this information to other parents as the gliders were (relatively) expensive toys and they didn't want others to waste money. As such, we remained the only kids we knew who actually had the tan Grunt figure.

For a long time, though, I ignored the figure. Sometimes, I had him work with Doc since both were tan. In early 1984, though, this figure became more important as I added a V1 Duke to my collection. Duke was similar enough in color to this Grunt that I finally had use for desert figures. When Dusty was released in 1985, I had a full desert team of which this Grunt was an important member. I outfitted the figure with an accessory pack Grunt backpack (which perfectly matches this figure) and an accessory pack M-16. As such, this was a perfect copy of the original Grunt...a figure that had long been destroyed by my younger brothers. (In fact, it was on this version of Grunt that I first noticed the silver painted knife. I had missed that on the original figure because it had been destroyed so quickly.)

After a short run on the desert team, though, Grunt faded away. The reality was that the new figures simply made this mold seem outdated and it was hard for me to fit him in with new faces like Flint, Snake-Eyes and Footloose. So, the figure fell deeper and deeper into my old figure box and remained there for some time. When I finally dug him out in the early '90's, I found that someone had been using the figure and broken both his thumbs. I then replaced the figure's arms with those from an old V1 Duke. I rolled him into a plastic bag and forgot about him until early 2000. At that point, I realized that the figure I had been counting as part of my collection was actually nothing more than a custom at this point but I really didn't care enough about the figure to acquire a new one until just recently. My new figure that you see below will be used for these photos and then put away. I simply won't have any use for him unless I want to take a nostaligic picture with lots or original figures. Beyond that, this mold has been replaced in my collection.

The Grunt mold had a long, productive life. After the three unique (straight arm, swivel arm, tan) uses in the US, the figure then surfaced in Argentina (though, in Argentina, the Falcon Glider actually included a tan colored, straight arm Zap figure rather than Grunt), Brazil and then showed back up in the US in the 1997 Stars and Stripes set. In Argentina, the Tan Grunt was released on a single card and was a new character named Sokerk. (This is the harder version to find. The Sokerk made from the Ripcord mold is more common.) The same mold was then released in Brazil as Estopim. So, aficionados of this mold have many different variations of the mold to track down.

On the surface, Grunt should be only slightly easier to find than the Viper Pilot. In the early days when you bought figures out of childhood collections, this was largely true. (However, it was still more difficult to find a mint Viper Pilot than a mint Grunt.) Now, though, Tan Grunts are easy to find and very cheap. The reason for this brings up an interesting point regarding Joe collecting that really speaks to how broad collectordom really is. The reason that Grunts are so available is because one single person purchased a huge amount of them and later divested them on the secondary market. This person had purchased hundreds of mint-in-bubble Tan Grunt figures (I don't know if he was able to buy them from Hasbro directly or if he acquired them from secondary market sources in the '80's and early '90's.) as well as hundreds of bubbled V1 Grunt figures. His plan was to use them in a grand military diorama. But, those plans never came to fruition and he sold his entire stock to a Joe dealer. This dealer then offered the figures to the collecting community for ridiculously low prices. As such, many collectors were able to bubbled Tan Grunts and open them for pristine versions of a figure that should have been hard to find. The point of this is that a one person can have an affect on the supply of aftermarket Joe figures to the point where a rare figure is available to point of commonality.

The effect of this is that Tan Grunts are cheap. Mint and complete, they rarely run more than $6 or $7. The filecard is a bit harder to come by as the dealer purchase did not have filecards. But, even that doesn't make the figure expensive. This version of Grunt remains about the cheapest '82/'83 figure to acquire. The cool thing about this is that you can buy several Tan Grunts, add a few Tan Clutchs and maybe a Duke or two for variety and you can re-create several of the original '83 Joes in desert garb. As the V1 accessory pack weapons match this color scheme, it is a creative way to build an alternative look at the original Joes. Beyond that, though, there isn't much need for this figure. As a completist, I recommend buying one now while prices are still good. History has shown that demand will, eventually, overtake the supply of figures like this and you will see prices rise. This is a figure well worth his current price, but I'd be hard pressed to pay too much more for one. 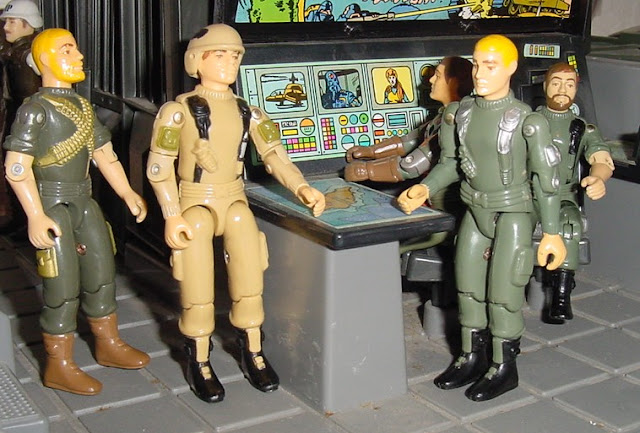 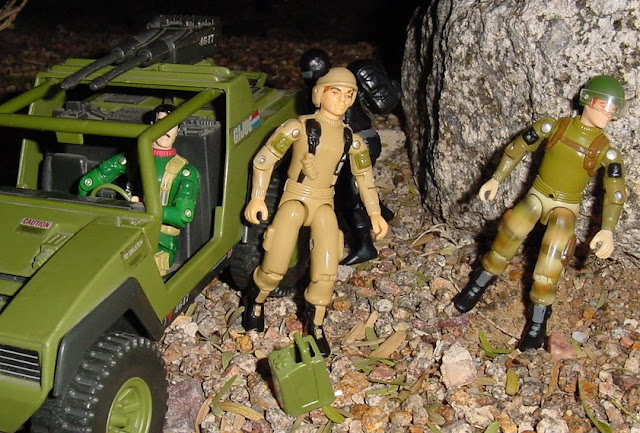 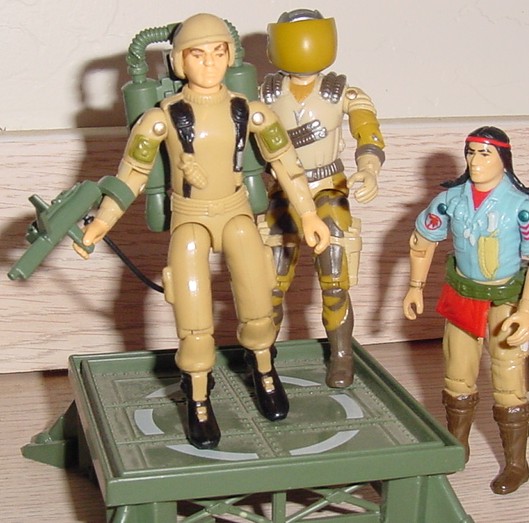 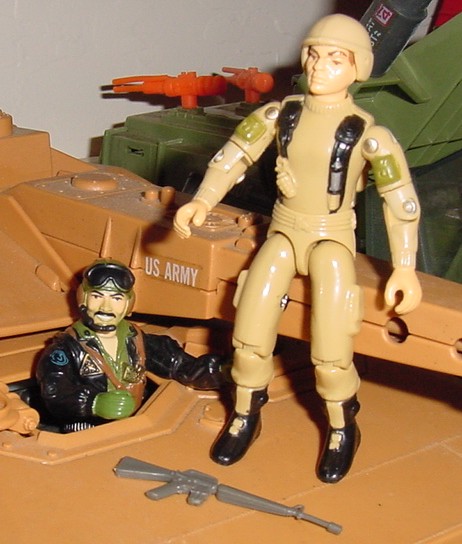 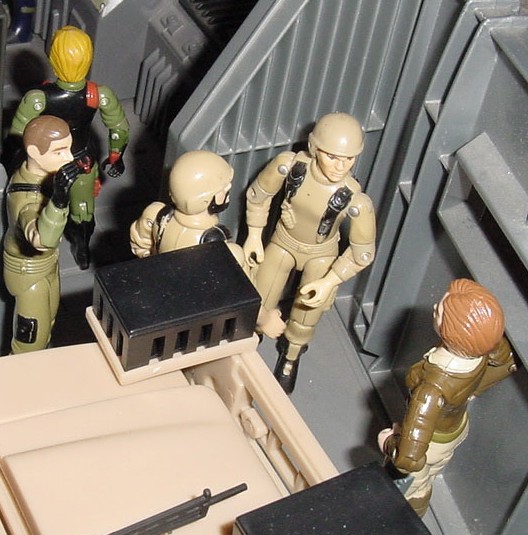 Posted by Robot_Sonic at 10:15 AM
Email ThisBlogThis!Share to TwitterShare to FacebookShare to Pinterest
Labels: 1983, Grunt, Vehicle Drivers