Dee-Jay!  Really, Dee-Jay!?!  As figures and characters go, there aren't many who are treated with as much disdain as the final Battleforce 2000 member.  His figure is pretty much reviled and his character traits (A DJ who became an electronics expert and was recruited into Battleforce 2000 for this expertise!) are pretty ridiculous.  Most collectors pass this figure by without much of a thought.  That was his fate in my collection, too.  However, the Dee-Jay mold actually has some decent sculpting and the figure, in the proper setting, can be a useful addition to any collection.

Dee-Jay's most legitimate claim to fame is the fact that his head and body were used to make two of the most distinct Brazilian Exclusive Cobra Villains: Abutre Negro and Corrosao.  His other claim to fame is that Larry Hama introduced him into the comic book, only to kill him on the same page.  The real question with Dee-Jay is why was he released as a member of Battleforce 2000 in 1989?  The first 6 Battleforce 2000 members were released at the tail end of 1987.  They were still in the rotation in 1989.  But the addition of one new team member in 1989 really didn't add anything to the team.  The original series was 6 figures, 6 vehicles.  So, Dee-Jay was the odd man out from the get go.  Maybe the designers thought his futuristic look was better suited to an existing sub team than as part of the regular carded Joes from that year.  But, his late release just makes Dee-Jay even more of an odd duck.

When you really look at the Dee-Jay mold, you see why it was so popular on South American Cobras.  His eyes are covered with a villainous visor.  His helmet seems overly ornate for a simple communications officer.  And, he has a random communications device coming out of his helmet.  His entire outfit is bulky and detailed in a way that makes his appear more evil than good.  Beyond that, though, the mold is, in total, fairly strong.  The white and olive green isn't a color combo that should work, but it's actually not terrible.  If not for the splash of blue that protrudes from his grey leg armor, Dee-Jay would be fairly strong figure.  There is definite potential in the mold...even if most of it would be better suited for Cobra.

Dee-Jay's accessories are interesting.  He has the helmet antenna which should, due to its propensity to be lost, should drive up Dee-Jay prices.  But, the antenna actually affixes to the helmet quite well and isn't as loose as those of Heavy Metal or Worms.  So, it is much easier to find.  His backpack is large and not overly detailed.  It doesn't add to the figure's quality, but doesn't really detract from it, either.  The hoses from Dee-Jay's head to his shoulder really make no sense.  Since his face is open, why would he need this type of attachment?  The hose is too big and either restricts movement of the figure's head, or gets in the way of his backpack.  The white attachment points for the hose are nice additions that help differentiate Dee-Jay from many other figures with hoses.  But, the whole apparatus is clunky and rather non-sensical.  Dee-Jay's gun is futuristic and maroon.  I'll say it again...maroon.  Fortunately, black versions of the weapon were available with a few figures from the mid 1990's.  So, it's easy to give him his weapon in better colors.  But, out of the package, the maroon space gun is an awkward fit.

The Dee-Jay mold got a lot of use, just not in the U.S.  After he was released in 1989 and 1990, the mold was sent off to Brazil where it was used for the aforementioned Patruhla do Ar and Forca Eco figures.  In 1993, Estrela produced a final Dee-Jay figure for Hasbro.  This neon colored addition to the mail away Arctic Commandos Set was the final appearance for the Dee-Jay mold.  (This figure was bagged separately from the other three polar figures since it was made in Brazil whereas the rest of the set was made in Asia.  To this day, you most often see the Arctic Commandos Set sold with the three Asian figures together and Dee-Jay either missing or sold separately.)  The mold then died out, mercifully, and has not appeared since.  In the modern line, a Hasbro take on Abutre Negro or Corrosoa would have been cool.  But, that would have been the only reason for the Dee-Jay mold to make a new appearance.

I never had a Dee-Jay figure as a kid.  He came out after I had moved on from Joe.  As an adult, he was a figure I never really pursued.  Since he was so unpopular, I figured I could always get one cheap so there was no hurry.  When I finally did acquire one, it was for completion's sake.  He stayed in the baggie in which he was shipped to me and has not really emerged in years.  With both Corrosoa and Abutre Negro being such large parts of my collection, I had no reason to find a niche for Dee-Jay.  With this profile, though, I have a new appreciation for the figure.  It is of much higher quality than I ever remembered.  That doesn't mean, of course, that Dee-Jay will take on new prominence in my collection.  But, if the opportunity to display him ever arises, I will take advantage.

Dee-Jay figures are not hard to find.  Even with a small antenna and two small, white end caps to his hose, the figure is easy to track down complete.  The figures do tend to discolor, though, so that can be a problem when finding a truly mint figure.  But, since the figure is pretty much hated, even that's not really an issue.  Mint and complete with filecard Dee-Jay figures run under $8 and can be had much cheaper than that with a little looking.  For the price, Dee-Jay isn't a bad pick up.  The Brazilian figures have gotten hard to find and expensive.  So, cheap Dee-Jays make for perfect customizing fodder.  Even beyond that, the figure isn't terrible.  On the right vehicle or in the right playset, Dee-Jay is actually acceptable looking.  For a cheap figure that's over 25 years old, that's a respectable position.  Really, I only own the figure for completion's sake.  But, I have at least a passing appreciation for the figure.  It's not the worst lot in life for a Joe figure and, to me, makes Dee-Jay worth having around. 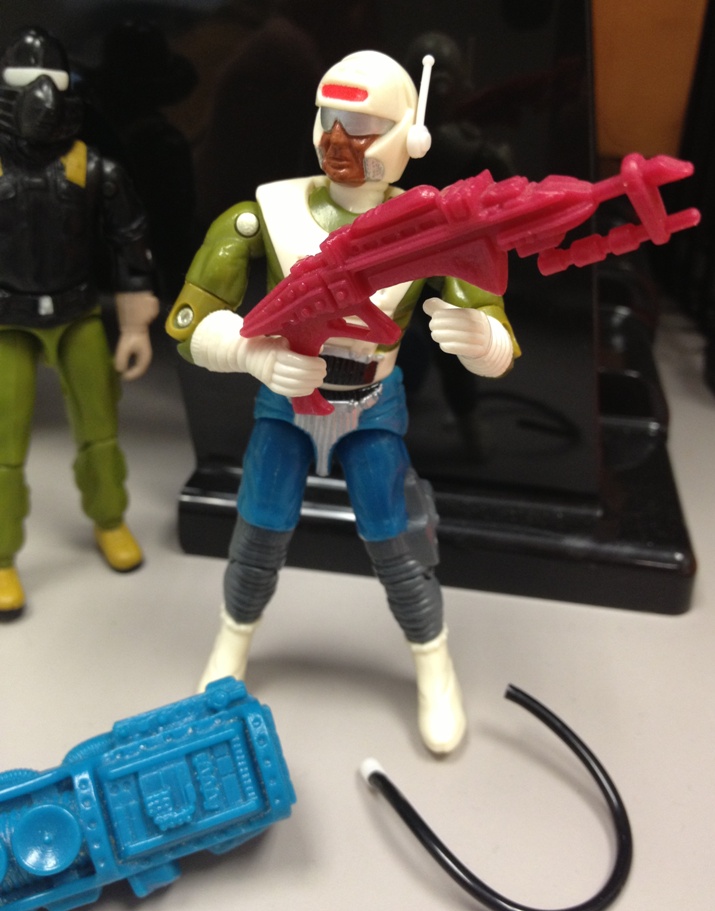 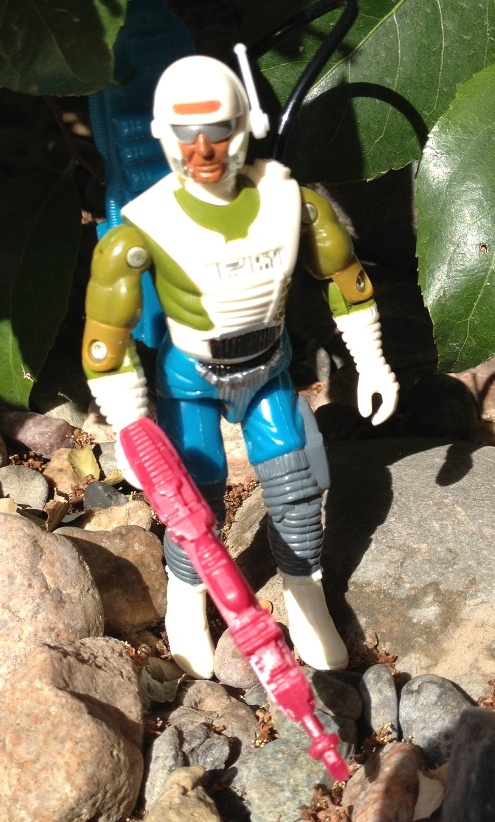