When Hasbro released Agent Faces, savvy collectors knew it was only a matter of time until the newly sculpted Crimson Guard mold would be given a new head and made available in some form of army building pack. Hasbro didn't disappoint as the mold was quickly used three more times over the next 2 years. Collectors rejoiced at finally having mass quantities of affordable Crimson Guard figures. But, these weren't without flaws. All of the figures released featured removable helmets. While this seems like a great idea, the reality is that the helmeted figures look bloated and out of scale. Without the helmets, though, the figures are nicely done and integrate well into any Crimson army. Of the 4 Crimson Guard figures Hasbro produced, I have actually chosen the black version from the Operation Crimson Sabotage set as the actual subject of this profile.

I'll just say it, these figures are poor man's Crimson Guards. While they are close to the originals, they are inferior to the classic, vintage figure. It's not that these are bad. But, they were made to suck some of the money out of the vintage army builder market. That, in an of itself, isn't a bad thing. But, this figure was quickly overproduced and it's likely that at least one of the slots used for a release of this mold could have been given to another figure and it would not have impacted sales at all. It would have been great if Hasbro had also made an alternate head with the helmet molded that would have been closer to the vintage figures.

This mold is both resculpted and uses some existing parts. The chest, head, waist and legs are completely new sculpts while the arms are from the 1991 Duke figure. It's a nice blend that works well. The removable helmets are a nice touch. But, when the helmets are on the figures, they are bulky and look out of scale, especially when compared to the sleek, vintage sculpt. The KB Toys figures included the helmets and terrible shotguns. The Toys R Us figures included the helmets, black versions of the 1991 Dusty's backpack and new sculpt rifles that are based on the AR-15. It's a decent accessory complement, but not as distinctive as the vintage figure's bayoneted rifle.

The Operation Crimson Sabotage set was shown at the 2004 G.I. Joe Convention. It was slated as a KB Toys exclusive. Immediately, collectors loved the idea and went batty talking about how many they would buy. When the set was finally released in the 4th quarter, panic set in as the initial shipments were spotty in parts of the country. Plus, KBToys.com cancelled a HUGE number of online orders for these sets and many collectors were stricken with the reality that they might not be able to get numbers they desired. Quickly, prices of the sets spiked to $50 or more on Ebay. But, slowly, supply outpaced demand. By the time the holiday season was over, these sets were showing up at KB's outlet stores at clearance prices. The initial rush was heavily due to the Cobra Infantry Teams selling out so quickly earlier in the year. But, as we approached 2005, more and more rumours of a Crimson Guard themed 6-pack leaked out and that got collectors to take it a bit easier on the Sabotage sets.

Hasbro really missed the boat with this mold. While getting a new Crimson Guard was nice, Hasbro basically released the same figure three times. Fortunately, Hasbro did color the mold entirely in black for the underappreciated Crimson Shadow Guard. However, Hasbro could have done so much more. A Cobra blue repaint of the Crimson Guard was such an obvious gap in the vintage line and Hasbro simply passed on their chances to make one. A blue Stinger with a couple of blue Crimson Guards would have been a great way to end the line. Even making the Shadow Guard half blue and half black would have been a great nod to collectors. But, that never came to be and collectors are left with bootleggers to fill the gaps that Hasbro missed.

Initially, collectors thought this figure might be scarce. But, Hasbro made an ample supply of the CG molds available again in 2004 and that has helped keep this figure reasonably priced. Of all the CG's, though, the black figure is most desirable and tends to cost a dollar or two more than his counterparts. Still, you can get about three of these guys for the price of one vintage Crimson Guard. The Crimson sets were released at a time when collectors were finally starting to feel army building overload. As such, they didn't sell through as quickly as the Cobra Infantry sets and remain less popular today than those well done figures. Hasbro overdid it on releases of the classic, red Crimson Guard updates. But, that leaves this figure as something that can still be affordably army built almost a decade after its release. That isn't terrible. This figure was a nice nod to collectors, but has its issues. As such, it tends to be a figure that collectors own, but don't really appreciate like they do earlier versions. 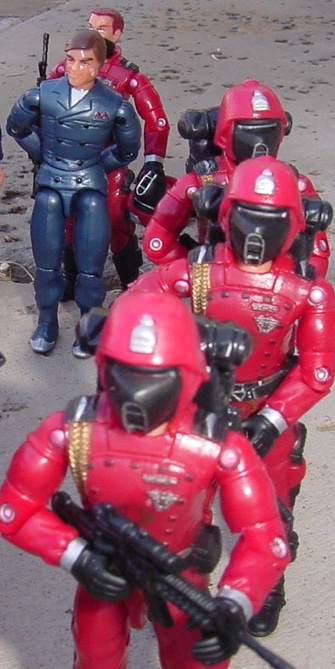 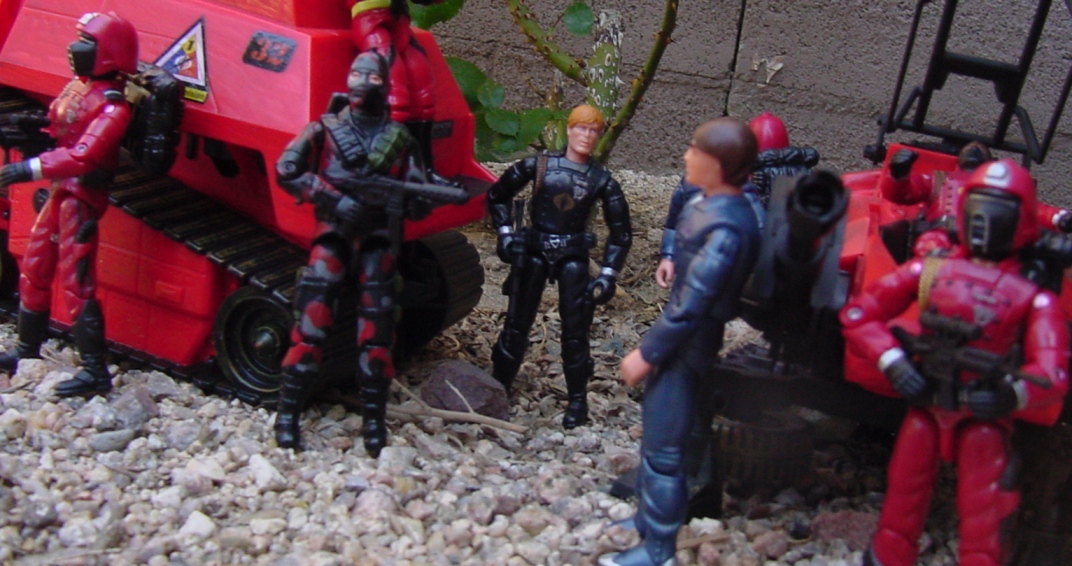