In 2005, Toys R Us listed a set called Winter Operations as one of its upcoming exclusive 3 3/4" Joe products. A few weeks before the set's release, an early sample appeared in Asia. The pictures were quite a disappointment to many collectors as they featured poor accessories choices, odd color combinations and some questionable molds. However, upon the set's release, an odd thing happened: it sold fairly well. While some collectors were still able to pick it up on clearance, the Winter Operations sold more briskly than collector favorite army builders like the Shadow Guard and Imperial Processional. The reality is that the Winter Operations was a breath of fresh air in series of 6 packs that had become to formulaic and predictable. While the colors weren't the greatest on some figures, they were unique and allowed the set to stand apart among its contemporaries. As a bonus, though, Hasbro slipped a little gem into this set: the Winter Operations Snake Eyes.

Snake Eyes is a double bonus in that he uses a non-traditional Snake Eyes head, but also a body that is new for the character. The entire body mold was originally used for the Sub Zero figure and is a high quality arctic mold. It combines perfectly with the head to create a visually distinctive figure. The true calling card of the figure, though, is the coloring and paint applications. Snake Eyes features convention quality paint masks and is colored all in black, white and green. Frankly, this is probably the most useful combat Snake Eyes that has ever been released. He is definitely more commando than ninja: but features a completely new uniform that breathes new life into a character that has been heavily overdone at this point. The look is, for me, a decidedly military take on Snake Eyes and something more akin to his original design than the ninja he later became. But, the Sub Zero body is slender enough, even with the winter gear, that you can still see the lithe ninja behind the mask and that offers just the hint of versatility that I look for in a figure design.

As such, this Snake Eyes sees a good amount of use in my collection. He is a perfect complement to a commando team and works in many vintage vehicles. The green and black coloring allows for the character to be used outside of the Arctic setting. Outfitted with a uzi, pack and sword from the 1989 Snake Eyes, this figure quickly becomes an excellent rendition of the Snake Eyes character that features the added value of modern, more pliable plastic. I still find it surprising that this figure has slipped so far under the collector radar in the past few years. But, he does show that value can be found in the figures from the repaint era.

The molds on this figure disappeared for a long time and then came back with a vengeance. Sub Zero was last used in 1993 in a mail away set. The Snake Eyes head had been lost until the fall of 2004 when it was used in the Desert Patrol set. This use was the second time Hasbro brought it back and it was well worth it. (Granted, the HAS Snake Eyes that was released right after this set takes away some of the uniqueness of this mold, but since the hallmark of this figure is the paint applications and alternate body, it still leaves this figure as a winner.)

As a character Snake Eyes is overdone. As a toy, he is more so. Yet, his enduring popularity shows that collectors, despite their complaints, still love the character and will acquire every version of him they can. Personally, I still like the character. As an adult, Snake Eyes is interesting enough to me that I can still see his relevance. But, as a kid, Snake Eyes was the highlight of the Joe team. It is those memories (especially of the '85 figure) that keep the character important in my collection. But, I do think that we got too much of a good thing in regards to Snake Eyes figures. Since 1997, we have seen no less than 6 takes on the V1 Snake Eyes mold. Seeing a figure like this Winter Operations version, though, shows that Hasbro could have been much more creative in their Snake Eyes releases. (Especially when you consider that it is the '85 version of Snake Eye's look that is more iconic and better known.)

Today, Snake Eyes is the most expensive Winter Operations figure. As the Winter Operations set has become somewhat scarce on the secondary market, it's not uncommon to see many mint and complete with filecard figures hit $20. Boxed sets, though, can still be had for around $50. And, from time to time, some of the figures do sell very cheaply. At that price, though, he is well worth acquiring. The rest of the Winter Operations set has potential and has its moments. But, Snake Eyes is the highlight and really is a must have figure. I know that I was happy to acquire a few multiples of the figure for future trading and to ensure that I have a "use" specimen in my collection. The figure is one of the hidden gems that are common in the modern Joe line. He was hidden with a group of figures that many collectors either passed by or simply forgot about once they were purchased, opened, and packed away. But, the figure is amazingly high quality and one of the better Snake Eyes figures ever released that was not the traditional V1 or V2 look. He has found a nice home in my collection as one of the few Snake Eyes versions I still use. 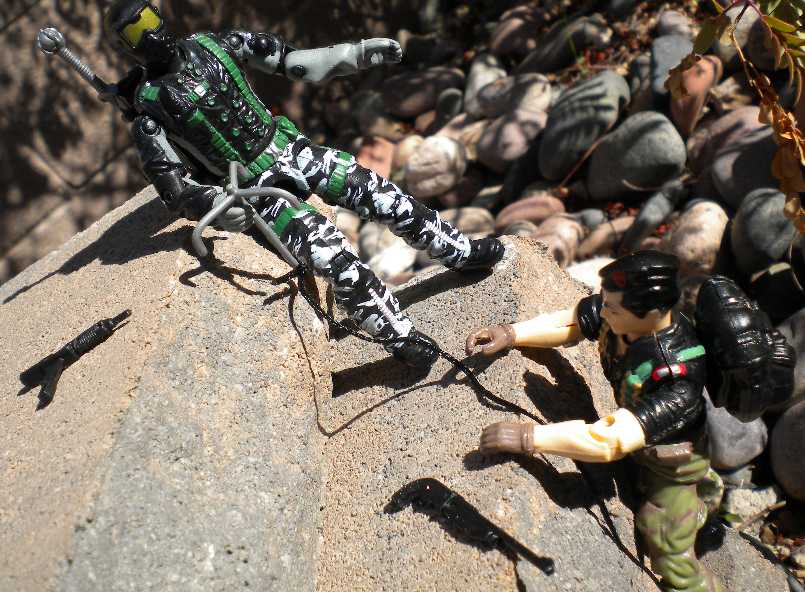 Posted by Robot_Sonic at 11:05 AM
Email ThisBlogThis!Share to TwitterShare to FacebookShare to Pinterest
Labels: 2005, Retailer Exclusive, Snake Eyes, Winter Operations