There aren't many G.I. Joe figures that really fit into a Halloween motif. (Well, there are quite a few that work as ironic costumes, but that's another story.) You have a few space monsters, zombies and the general menagerie of costumed villains. But, I wanted to find something even more oddball and obscure for the rare opportunity of a profile posted on Halloween. A Manimal figure really fit the bill. The figures are generally obscure, stray from even the most liberal definition of vintage Joes and are of a construction type that makes them more a separate toy line than something easily integrated into a Joe collection. They are also, though, one of the most famous pieces of Joe lore. So, it became an easy selection.

The Manimals have the inglorious distinction of being the only G.I. Joe concept to be cancelled twice. The first series was sculpted, molded, painted and even carded back in 1994, only to have the rug pulled out and the line killed. The same happened again in 2001. The response to the Manimals was so poor that the second wave of the figures was cancelled. KB Toy stores had shelves full of Manimal figures well into 2003 and even 2004. The figures were spectacular failures. Most Joe collectors easily foresaw the retail disaster. But, in 2000 and 2001, Hasbro was still stubbornly clinging to 1990's collector mentality: collectors wanted remakes of obscure items, even if those items were terrible the first time, collectors liked army builders, but didn't mind getting an extra character with them, stores wouldn't support single carded figures, collectors would blindly buy anything with the brand name attached, etc. In time, failures like the Manimals broke Hasbro of some of these notions. But, others persist to this day.

The Manimals are en extension of Star Brigade. Had the Joe line survived later into 1994 and 1995, the Star Brigade line would have continued to expand with new astronauts, new Lunartix aliens and a host of new concepts that would have further bended the line away from its traditional figure-construction roots. Manimals, Replicators, War Dogs and other concepts were ways that Hasbro could infuse more science fiction into the line and develop toys that were not constrained by the O-ring/T-hook construction scheme. Really, though, Hasbro could have put the entire 1994 and 1995 Star Brigade concept as a completely separate toy line. The heroes could have been the same Joe characters, or they could have renamed the figures that used Joe molds. The result would have been a science fiction type toy line that would have been free of the legacy of G.I. Joe and could have competed directly against the Ninja Turtles and Power Rangers toys that were dominating the action figure aisle at the time. Standing alone, the Manimals, Lunartix and other bizarre concepts might have put together a solid little retail run. But, it's likely that Hasbro wasn't about to launch a new toy line without the brand support of G.I. Joe and, almost conversely, Hasbro needed new life from new concepts to shore up flagging Joe figure sales. Plus, many of the specialties and bios from the 1994 Star Brigade series sound like blatant Star Wars rip offs. With the knowledge that Kenner's flagship line would return in 1995, it's unlikely that Hasbro wanted another sci-fi to compete against itself.

If you look at the Slythor figure, you can see from his design the influences other toy lines had on the designers. Slythor's head is straight out of the Teenage Mutant Ninja Turtles line. The offset eyes, over sized ears and hyperbolically exaggerated teeth all give him the appearance of a toady for the Turtle's Shredder character. The '90's visor just completes the image and really dates the figure's design. The snake head is barely hidden in the figure's chest and I'll leave it to the reader to make jokes about the snake's tongue folding into the figure's fly. The original Slythor concept in 1994 was a red bodied figure. The KB version, though, changed the colors in an attempt to preserve the value of the originals. In the case of Slythor, the green color is an improvement that allows for the figure's details to come out and follows more in line with the character's snake form.

But, once you get past that, you see that there is a level of detail and paint application that would make this figure stand out among most of the low quality toys from the early '90's. The eyes on the snake head are excellently painted. And, the figure features no less than 7 different colors interspersed around the body. The construction quality is top notch and the entire figure is very solid. While the Manimals followed some tenets of standard G.I. Joe construction, they also deviated. Slythor does not have a standard O-Ring waist. Instead, his legs are closer to the construction of Sgt. Savage figures. (A line of World War II era soldiers fighting against aliens like the Manimals might have actually been a better retail concept than the Sgt. Savage line as it was released.) The result is that there are kneeling and sitting poses that are difficult to manage for the figure. But, since most collectors either have the figure only carded or standing in a standard loose pose, the construction limitations are not as much of an issue.

Slythor is actually quite imposing. The figure stands taller than standard Joe figures and is powerfully built. His hands feature razor claws that let you know this is a terrible monster. But, really, what do you do with a monster in G.I. Joe? Cobra's forays into genetic experiments and chemical enhancements might produce some one off mutants. In the past, the Lunartix aliens fit those roles, though. The Manimals simply don't fit. Displayed among the Lunartix and other Star Brigade figures, they can be visually interesting. But, that is about the extent of their involvement in any collection. I am an unabashed Star Brigade fan, but I have no use for the Manimals. That pretty much sums up their place in the Joe world.

I have always viewed this character's name as slee-thor. Basically, the name is a He-Man version of Slither. However, the earliest images of the Manimals have this character named Slither. So, it's likely that the actual pronunciation is more like Slither than my Slee-Thor version. But, I like Slee-Thor better and will likely to continue to pronounce his name that way. Seeing the spelling of the name change is an interesting insight into the designer's intentions. Did they run into copyright issues with Slither? Did they just want to spice the name up and make it appear more alien? We will likely never know. But, it is nice to have of this insight into an unproduced character.

Slythor includes three accessories: a pistol, a rifle and a visor. The pistol is fairly interesting and is reminiscent of the Air Devil's gun. The rifle is huge and doesn't really work with the figure because the bulk of the barrel overwhelms the cylindrical handle and falls out of the figure's hands. The rifle looks very much like the "extra" guns that were included with the 1995 era Star Wars figures. The visor barely fits onto the figure's head and falls off easily. Had this figure been a vintage release, it's likely the visor would be an expensive accessory as I nearly lost it twice on the garage floor when I took the figure out for the photos below.

The Manimal molds were used by Hasbro to create the unproduced figures in 1994, the released wave of figures in 2001 and the unreleased wave of figures in 2001. After that, Funskool acquired the molds. However, Funskool determined they would never release them because the figures were too "devilish". However, in the mid-2000's, an enterprising person from India contacted a few American dealers about an unsanctioned run of Manimal figures made in Funskool factories. These would not have been Funskool releases and would not have fallen under Funskool's licensing agreement with Hasbro. The whole thing was very sketchy from the start. Fortunately, the deal never came to pass and there were never any Manimals made in India. It is likely, though, the molds are still there and it's doubtful that Hasbro would want them back.

Today, Manimals cost about the same as they did 12 years ago. The $9.99 retail price was stupidly high at a time when you could get two figures for $5.84 at Wal-Mart. But, that's part of the reason that KB Toys isn't around anymore. It's not that easy to track down Manimal figures. But, even carded, they rarely sell for more than $12-$15. Dealers ask a lot more: banking on expediency trumping frugality. But, the modern collector can acquire these figures for about the same real dollar cost as the collector from more than a decade ago. That, more than anything, defines the ultimate failure of the Manimals. Had they been released, they would be hated to a degree reserved for only the most disdainful of Joe releases. Even being an "unproduced" item, they can not muster up excitement since they deviate so much from Joe's roots. 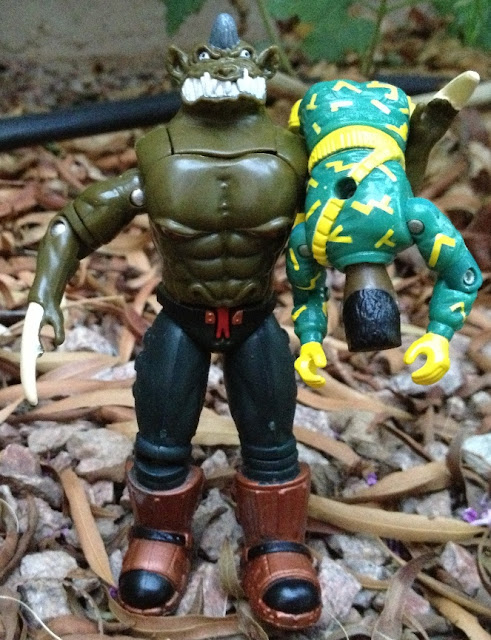 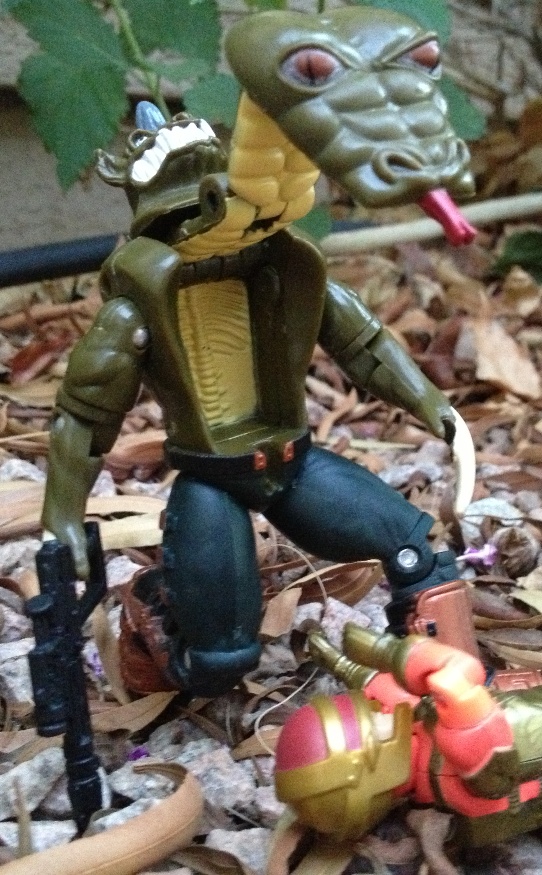 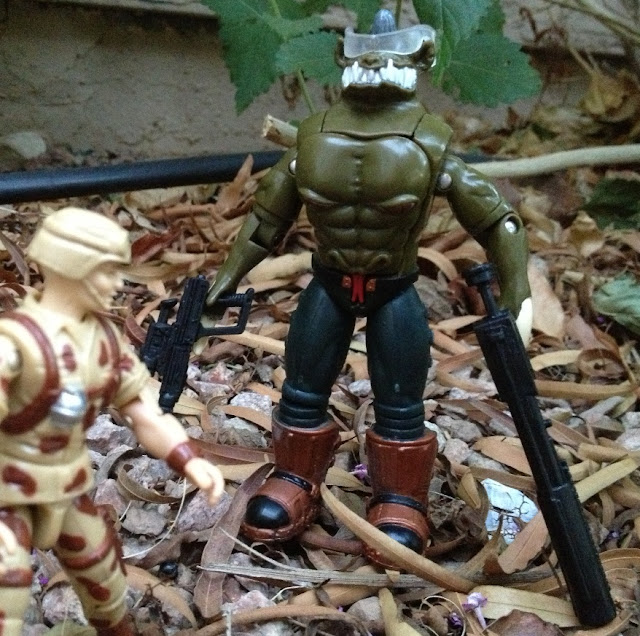 Posted by Robot_Sonic at 9:32 AM
Email ThisBlogThis!Share to TwitterShare to FacebookShare to Pinterest
Labels: 2001, Manimal, Retailer Exclusive, Slythor, Star Brigade