In the vastness of the Cobra army, there is one area that was largely ignored during the vintage line. Desert themed Cobras were few and far between during the original run of figures. In the modern era, there are still very few desert themed Cobras done in the ARAH construction style. (The new sculpts did see a few more desert characters and repaints.) In 2006, though, Master Collector offered collectors a series of 4 2-figure sets. Each one themed to an environment. Included were acquatic Joes, and Cobras from the forest, Arctic and desert. The reception to these from collectors was no commesurate with the quality of the figures. The molds were generally not overused. The colors were very good. And, most included original accessories or close enough approximations that they were acceptable. Sadly, though, the concept failed and the Operation Flaming MOTH figures were the last ARAH-style retail offerings that Master Collector attempted.

The Flak Viper mold is one of the gems from the last years of the vintage line. The massive figure meshes with his speciality, even if the notion of a missile firing backpack that large (which would pulp the wearer) is ludicrous. The two tone desert pattern on the upper body along with the wealth of painted details really brings the mold to life. The inclusion of the figure's original accessories was another great surprise. The mold had appeared in 2004 as the highly likable Urban Nullifier. But, that figure had not included even the solidly designed Flak Viper rifle. So, seeing the full complement of original gear, helped to make this figure more desirable.

It is impossible to mention any figure from the MOTH sets without also mentioning the public relations fiasco that surrounded their release. When originally announced, the sets were trumpeted as not being army builders. For many collectors, the idea of dropping $16 on one figure is much more palatable if that figure is a character. When the first set appeared, though, the figures were army building molds. MC quickly went into a game of word play saying these sets weren't "meant" to be army builders. As such, the result is that this figure is actually Flak Viper Andrew. This wasn't cute. It wasn't coy. It wasn't fun. It wasnt' clever. It was a disingenuous ploy by a company who lacks any understanding of their 3 3/4 fan base to exploit the collectors and then laugh at the collector's expense. As such, these figures are forever tainted by the organizational failure of their release. To this day, when these figures are mentioned, someone brings up the fact that they aren't "meant" to be army builders and reminds the collecting community of the great laughs that MC's employees had at all our expense in regards to these sets.

It is no secret that packaging adds substantial cost to a toy's release. In the case of retail stores, this packaging is a necessity from a marketing standpoint. You have to have products that are eye catching on the shelves. However, these costs can be spread out over the higher production numbers of a full retail release and are built into the retail price. However, for a product marketed only online to a dedicated fan base that is interested in pretty much any new figure regardless of design, this packaging quickly becomes superfluous. This is especially true when the packaging offers little to the collector except for increased production and shipping costs. This was the case with the MOTH sets. Had these figures been offered bagged, they would have likely cost about half of the real price. When you think about this figure at a retail price of ~$8, it is much more attractive. At $8, this Flak Viper would be competing against an entirely different group of figures at the price point then it does at $16. The worst part about these boxes, though, is that they aren't even gradable. Sealed products can be graded. That appeals to a segment of collectors and makes things like packaging worth something. Since these boxes weren't sealed, grading wasn't an option. In fact, by not sealing them, MC pretty much dictated that these figures be enjoyed loose. But, even with that implied mandate, they forced the expensive boxes onto collectors. The upside is that the market forces rendered these sets a failure and the planned vehicle was scrapped due to low sales. But, that meant that a poor marketing decision has left collectors with 8 figures that are artificially inflated in price and have reduced availability due to the way the exclusive was handled. In the end, collectors lost on this whole endeavor and the ill will generated by these sets helped to diminish Joe's popularity in late 2006.

Today, these Flak Vipers aren't overly desirable. Despite low production numbers, they failed to capture the attention of the collecting community and are still available for their original retail price from MC. On the secondary market, it is not very common to find these figures offered below that original price since anyone who bought these for resale is reluctant to take the loss so quickly. Those that are left to full market conditions tend to sell for around $10-$12 or so. Those that are priced closer to the $16 price usually do not sell at all. The reality is that those who buy every figure purchased this set when it was released. Due to the price point, few collectors army built the set, many who were marginal about the figures simply skipped the set altogether and it was hard for dealers to purchase extra sets for profitable resale. As such, the figure quickly faded into obscurity and remains the type of figure that most collectors only seek for completion's sake. Personally, at $6, I'd buy a full dozen of these guys. At $8, I'd buy about half that many. For $10 or more, one is enough. Once you cross that price threshold, there are too many other options from the line that are available for the same price, but whose figure surpasses this desert Flak Viper. That's unfortunate as this is a good figure and one that I'd like to make a larger part of my collection. Based on comments from the community both at the time of this figure's release and even today, it seems that I'm not alone in that feeling. Alas, it will likely be several years before prices on this figure fall into line with the demand of the character. When that happens, I'd like to think that I'll get a few more. But, history has shown me that I will likely be on to some new figure at that point and this Flak Viper will remain alone in my collection. 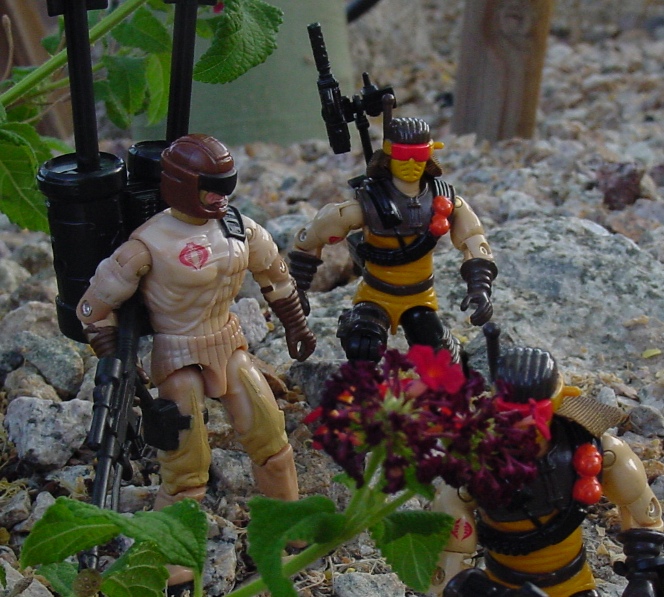