The A Real American Hero Collection promised collectors a great deal back in 2000. The Toys R Us exclusive repaints of 1997 and 1998 had been hit and miss in terms of overall releases. But, the '98's were generally more accepted by collectors than the '97's. And, the first wave of the A Real American Hero Collection showed great progress in terms of what Hasbro was willing to release. In late 2000, images surfaced of the 6 figures that would comprise Wave II of the series. Collectors were impressed with the lineup: Big Ben, Whiteout (a Snow Job repaint), Duke, Sidetrack (an Ambush repaint), the Rock Viper (a Range Viper repaint) and, finally, Major Bludd. Major Bludd was everything collectors were hoping the line could be: a sensible repainted homage to the vintage figure using a later mold that was not originally painted in colors that were as appealing. The 2001 figure returned Major Bludd to his brown and black roots while maintaining a look that was in line with the character. It was a great start that, unfortunately, turned out to also pretty much be the end of such quality figures in the line.

This Major Bludd is a straight repaint of the 1991 Super Sonic Fighters Major Bludd figure. The original use of the mold isn't a bad figure and works for the Bludd character. But, seeing it in Bludd's classic colors was a great bonus for collectors. It allowed Bludd to have his classic look with a more modern mold that fit with many figures from the 1990's. (If you look closely, the figure even has the pack of dog tags from the original figure. They are just not painted, so they are difficult to spot.) It was a great update that was the perfect companion piece to the 1993 Cobra Commander and 1992 Destro figures. For an adult collector, being able to assemble the Cobras of my youth in updated molds that match many of the later figures who became part of my collection as a collector was a great way to get me interested in the years of the line to which I have no real childhood connection. Figures like this Bludd also were a way to keep Joe from getting too out of hand. As the repaint era expanded, Hasbro had to create more and more figures that were "different" from the main notion of a character to keep those characters on retail shelves. There were times where a totally new interpretation of a mold worked out spectacularly. Other times, though, it completely failed. Instances like this Bludd, where Hasbro was able to bring a new mold back in colors that were reminiscent of the original were great ways to keep the characters out there without marginalizing them to too great a degree.

This figure quickly became the second most important version of the character in my collection. While he was not the classic look of the V1 that was displayed with my early Joes, it was a more ubiquitous figure who would appear among the stalwarts of the later Cobra repaints and remolds. The limiting factor of the figure, though, is the plethora of grenades sculpted on the body. Aside from the fact that Bludd would have to be a body builder to lithely move with that many explosives (no less than 16 of them!) attached to him, the grenades make it difficult for the figure to fit into many of the earlier Cobra vehicles. They add width to the figure's legs and arms that prevent decent fits into Rattlers, Hiss Tanks and Stingers. It is a limiting factor and the primary reason why the Chinese Major Bludd remains my Bludd figure of choice when I want a more modern mold for the character.

As a character, Major Bludd is among my favorite Cobras. Unlike the Commander or Destro, Bludd did not have some underlying reasons for his evil nature. It seemed that he liked money and was willing to accept payment from anyone who could meet his price. This makes him both an easy villain to predict, but also one that can be difficult to follow. At least with the Commander, his motivations always lead to him to the same path. With a guy like Bludd, he could accept work from Cobra one day and the government of a country opposing Cobra the next. It made him a labyrinth of loyalties that would be impossible to follow...unless you could follow the money. Having access to Bludd's finances would lead you to exactly where his immediate loyalties lay since he would be most loyal to the highest bidder. Of course, getting to his finances would prove problematic. So, even Cobra Commander would always to be wary of Bludd lest another, richer foe pay Bludd off for deep intel into Cobra's operations or for an assassination attempt on the Commander himself.

Major Bludd's accessories are terrible. He includes only a futuristic rifle from the Sonic Fighters figure. The originally yellow rifle is at least colored in black this time around, but it is still awful. As such, collectors are pretty much forced to update Bludd's weaponry on the aftermarket. There are a wide variety of weapons available for Major Bludd and the V1 figure's pistol and pack work excellently on this later release. It's unfortunate that collectors had to look elsewhere to get decent weapons for a figure released in 2001, but it was definitely a harbinger of things to come. It is also one of the reasons why this figure has never really gotten greater appreciation by collectors. Poor accessories can ruin even great figures. Had this Bludd included weapons more in line with his vintage appearance, or even something that was more sensical than what was included, it's likely this figure would be a bit more popular.

The Major Bludd mold saw a short life. After its use in 1991 and 2001, the figure was shipped off to India after Hasbro cancelled the ARAHC line. (The head was used in 1994 for the Chinese Exclusive Major Bludd.) Funskool quickly resurrected the mold and released in colors nearly identical to the 2001 figure in 2002. The Indian figure is slightly lighter in color. But, the general idea of the figure is the same. Amazingly, the Funskool figure actually included worse accessories than the American figure as it gave Bludd a series of translucent plastic weapons in bright colors. After that, the mold disappeared. It's possible that Hasbro got it back. But, really, the only use for the mold would be for parts in other figures. The chest would make for a nice Frag Viper upgrade. But, that will never happen. At least collectors got the best possible Major Bludd repaint from the mold before it disappeared forever.

To call this figure worthless would overstate its value. Wave II of the ARAHC series was so overproduced that it was really responsible for the line's death. Bludd's were available for $5 at retail outlets well into 2003, even though he was packed with a highly popular army builder during the height of the army building craze. If you can find anyone bothering to sell the figure these days, they are dirt cheap. As many collectors acquired dozens of Bludds in their army building zeal, you may even find some collectors willing to sell them for $1 or $2 each. It's a pittance for a figure of this quality. With the money you save acquiring the figure, you can go out and get a set of the V1 Major Bludd's accessories for use with this version. Then the figure appears more worthy of the character. For me, the Chinese Major Bludd is the best modern take on Major Bludd. But, this figure isn't far behind. The classic color and true to the character visage make for a figure that must be part of any collection. The fact that its dirt cheap only makes the figure that much better. 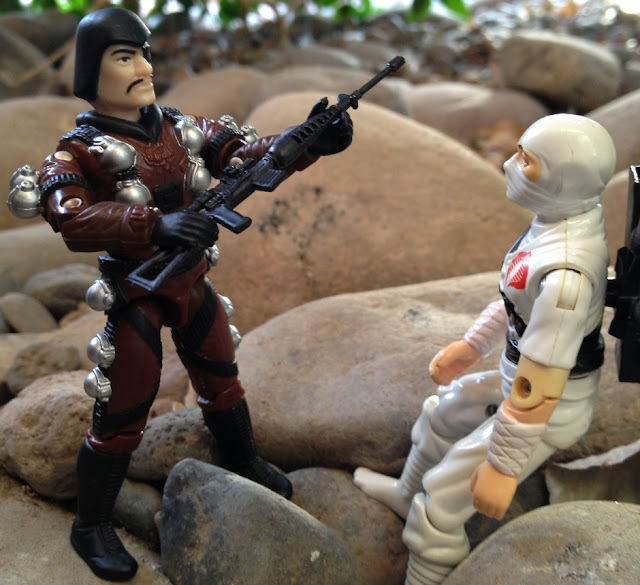 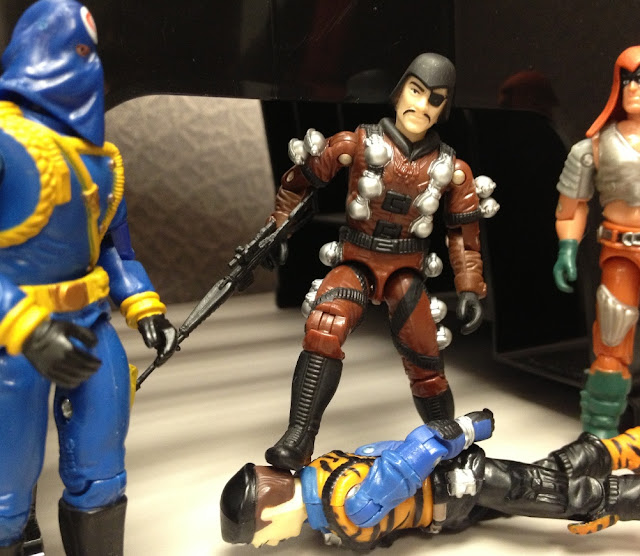 Posted by Robot_Sonic at 10:44 AM
Email ThisBlogThis!Share to TwitterShare to FacebookShare to Pinterest
Labels: 2000, 2001, ARAHC, Major Bludd