Of all the convention sets that Master Collector has released, I hold the 2007 version in the highest regard. Sure, there are individual figures in other sets that are better than pretty much all the figures in 2007. But, as a whole, the set delivered across the board. What really enhanced the set, though, was the convention attendee figures. In years prior, the attendee figures had been OK, but nothing that set the collecting world on fire. That changed in 2007 with the release of Steeler/Rip It and Grand Slam/Starduster. These 4 figures helped fill out the set and filled many gaps in the remakes of the vintage figures.

The Grand Slam figure is nothing short of excellent. Using obscure parts and colored in the traditional silver with a base green that is a cross between vintage olive drab and Action Force Green, the figure is an excellent example of what could have been done with the multitude of vintage molds that were available to Hasbro during the early to mid 2000's. The figure is a great update to the Grand Slam character using more modern parts, but is still in line with the character's original appearance. He is the perfect update and an exemplary showcase of how the entire repaint era should have been approached.

The accessories for this figure were excellent. Aside from the jet pack, the figure included a flame plume that was originally molded for a Boba Fett figure in the early 2000's. It turns out, this item fit into the holes sculpted onto the JUMP almost two decades earlier. So, it was a logical fit for this figure set. Grand Slam also included a recolored helmet from the 2006 Lady Jaye figure. It is an acceptable choice for flight gear. But, the fit is only so-so. It's a small issue, though, as the general appearance of the figure makes up for any shortcomings and the appearance of the JUMP was a tremendously welcome surprise for the collecting world.

For many collectors, the 2007 convention set was the swan song for the ARAH style Joes. (Sure, Master Collector came out with ARAH sytle sets in 2008 and 2010, but this set seemed to be a celebration of the end when it was debuted.) The Anniversary figures were showing up at retail and bringing in a large contingent of modern toy collectors who had only a slight connection to Joe. The result was a drastic change in the collecting community...much moreso than even the dichotomy that erupted in 2002 over the JvC style figures. For that reason, the 2007 Con set has held a place of importance in my collection. It marked the last real time that collecting was about my generation and the type of figures that I enjoyed. After this, Hasbro was basically only interested in the new breed of collector and we dinosaurs were left behind.

The 2007 Jet Pack Troopers quickly became insanely popular on the aftermarket.  Within a week of the convention, the figures were selling as high as $150 each!.  In time, those prices dropped to around $100 or so.  They stay around that level, with some occasional dips, due to the low supply and high demand for Grand Slam and Starduster. These days, the figures are very difficult to find and do not appear with much frequency on the market. If you time your purchase right, you can get deals. But, the general scarcity and still high collector interest in these figures has left them very expensive to acquire. Had I not gotten a set during the days of the Convention in 2007, it's unlikely that I would have ever owned them. As a $35 figure, Grand Slam is pretty cool and worthy of acquisition. As a $85 figure, he is much less so. But, this is a both a character and figure that didn't get much due from Hasbro and having a high quality version is nice. It's a shame that these guys weren't offered to a broader audience for cheaper prices, though. 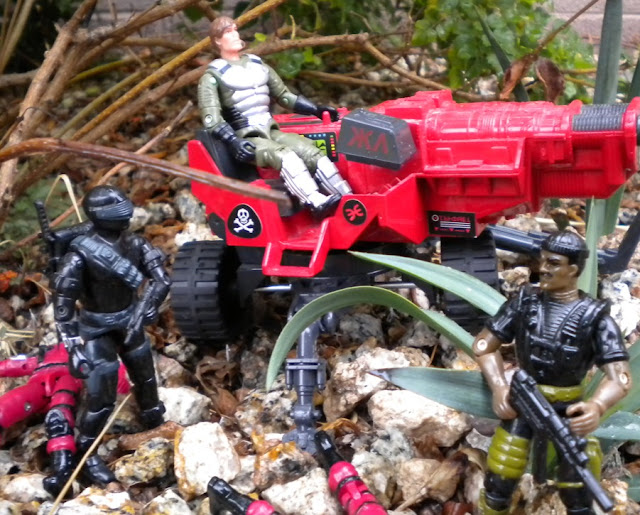