In 1992, Hasbro brought back a large number of classic characters. Many of them were in outfits that were based on their classic designs, but updated with more modern sculpts and molds. Roadblock, Destro, Cutter and Ace were all perfect examples of how to bring essential characters into the modern line. Another such figure was the Joe team's original helicopter pilot: Wild Bill.

This figure is rather important to me. Wild Bill was one of the first figures I bought at retail in the early 1990's and, as such, became a huge part of my collection during those early years. I created a character for the figure that was beyond Wild Bill. Even as a kid, the Wild Bill character had not resonated with me. While he was interesting enough, the notion of the wild, wild west simply didn't hold the fascination for me that it seemed to for many other people. (Ironic considering where I now live....) So, the original figure never saw much use, even though the Dragonfly was a staple of my childhood collection. As such, this figure had to be someone new. The result was a mercenary who was secretly working for the Joes. He was, publicly, a very wanted criminal. But, he had a secret deal with the Joes that, as long as he didn't kill any U.S. soldiers or police officers, he would be fully pardoned for any crimes as long as he kept the Joes up to date with intel from the criminal underworld.

This new character was often paired with a character portrayed by an ancient Stretcher figure I had bought for $1 at a flea market and Mercer. This trio would often disrupt Cobra's plans through their own criminal dealings. But, from time to time, they would help Cobra, too. Doing so allowed them to maintain the credibility as criminals and dig deeper into the Cobra hierarchy. Of the three characters in this little band, only Wild Bill had the deal with the Joes. But, unbeknownst to the Wild Bill character, one of the other members of this trio was a deep cover agent for another branch of the military. Only one member was a true criminal. When their reign finally ended, the real criminal was shocked to learn that his two compatriots were both fully exonerated and allowed to go free while he went to prison for the rest of his life. Naturally, at some point, it will probably behoove Cobra to break that character out of jail and have him exact his revenge....

As a mold, Wild Bill is well done. In this case, Hasbro actually allowed some simplicity to overrule the general look of the figure. So, Wild Bill doesn't have the textures or pockets on his shirt that are the hallmark of so many other figures. It is just plain and unencumbered. This helps to establish Wild Bill's homage to vintage cavalrymen since the entire look is based on the bandanna, gloves and hat. Time has shown, though, that collector response to this figure is poor. It is likely that the historical motif and bright yellow highlights really damage the figure's place in the Joe pantheon. But, at least the historical uniform was designed as a way to keep Wild Bill's character intact. Unlike many other character upgrades that occurred in the line's final three years, this Wild Bill would be recognized as the character by someone who was familiar with the 1983 figure. So, the mold succeeds in that regard, even if the coloring is poor.

Accessory wise, this Wild Bill is somewhat loaded. Along with the requisite missile launcher that was standard on carded figures after 1991, the figure also includes a removable hat, pistol, backpack and knife that fits into the backpack. These were done in a wooden brown color. It works for the pack and knife handle, so can be forgiven for the actual blade. For the pistol, though, the color would make no sense, except for the fact that Wild Bill's gun is supposed to be a wood encased homage to vintage weaponry. It is rather silly. But, the weapon looks somewhat decent and can be forgiven as a customization of a modern pistol gone wrong. At any rate, it gives the figure some additional character and fits the canonical representations of Wild Bill.

What's especially nice about this accessory complement is that it allowed for a kid in 1992 to use Wild Bill as more than a pilot. In the comic, Larry Hama was quite fond of Wild Bill and he was used time and time again in various situations. But, anyone familiar with the character was also familiar with the limitations of the original Wild Bill mold. This new take on the character coupled with the surplus of gear allowed for kids to use Wild Bill as more of a generalized Joe than just a pilot specialist. (This was also important since there were no real helicopters for sale in 1992 beyond any leftover Retailiators.) Upgrades like Wild Bill (Along with figures like Cross Country, Keel Haul and Frostbite.) helped to bring some of the older vehicle drivers into greater roles on the Joe team. It's possible that the updates for these characters was nothing more than Hasbro trying to maintain their copyrights on the names. But, even so, it kept the Joe line tied to its roots beyond multiple versions of Duke, Snake Eyes and Cobra Commander.

This Wild Bill mold was used three times. After the 1992 release, Hasbro repainted the figure with white pants in 1993. In 2000, Hasbro released the mold (basically in Cobra blue...) as the pilot of the Locust helicopter. The mold would never appear again. It would have been cool to see this mold done in a color homage to the version 1 Wild Bill figure. It would have been a great companion piece to the 1992 Cutter. But, that was not to be. In the end, the three uses of the mold are all fairly similar. The 2000 version is probably the best overall color scheme for the mold. But, it also has the least accessories. But, at least collectors have some variety in tracking down this Wild Bill configuration.

Like most of the regularly carded Battle Corps figures, Wild Bill is fairly cheap. Carded or loose specimens can be purchased for a pittance due to large supply and relatively low demand. This is another example of a quality figure that hasn't caught on in the collecting community. As such, modern collectors are able to add samples of the figure for nothing. Even buying an extra to customize into a green, "vintage" Wild Bill is affordable. That's a nice thing for a figure of this quality and helps to keep the Joe line fresh since you can still find high quality major characters for decent prices. 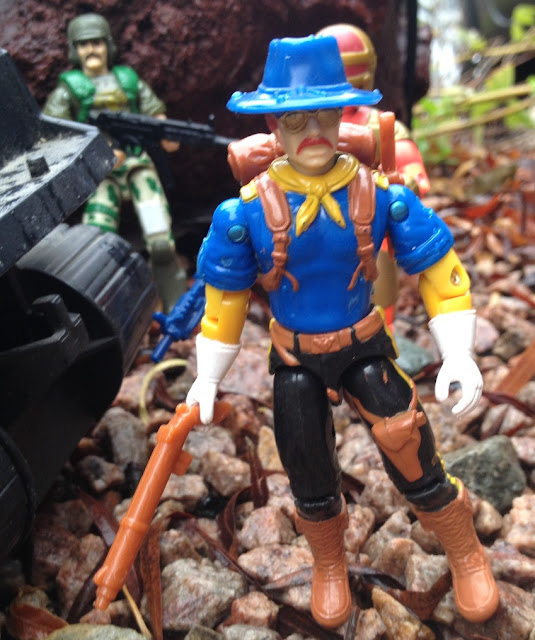 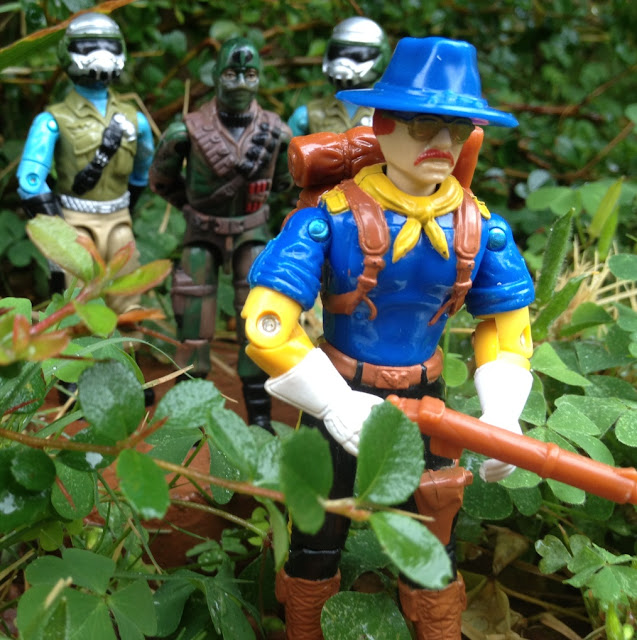 Posted by Robot_Sonic at 10:44 AM
Email ThisBlogThis!Share to TwitterShare to FacebookShare to Pinterest
Labels: 1992, Wild Bill