The 1997 Stars and Stripes promised so much, but delivered so little. Collectors were anticipating a great remake of the figures from the original year of the Joe line. Instead, they got a hodge-podge set that included some remakes, though in less than stellar paint schemes, and some newly amalgamated versions of classic characters. The result was a relative dud in the collecting world and the set became a remarkable pegwarmer for a few years. In retrospect, though, the set did have it's ups and downs. Stalker is a figure for the ages. Scarlett is a decent repaint that is something very different. Snake Eyes was interesting at the time, but watered down by the mold's later overuse. Breaker and Rock and Roll were just awful versions of those characters, though the Rock and Roll figure would work as someone new. The last three figures in the set, though, fall in between. Zap, Short Fuse and Grunt all use the classic molds with most of their vintage accessories. The figures have a similar color palette that is different from their original release, but similar enough that the figure's don't distinguish themselves. As such, these three figures have been basically forgotten by me since I first acquired them during their retail release window. Of the three, though, Grunt has some very redeeming characteristics and some unforgivable flaws.

This Grunt figure uses the basic mold of the original Grunt for the head, chest and arms. The legs, though, are from the original Snake Eyes figure. Snake Eyes had the most elaborate leg molds of the vintage line due to the molded bomb on his left leg that was lost in the sea of black from the original figure. Adding these legs to Grunt makes the figure more interesting to me. And, since the original Joes were just rearrangements of many similar parts, doing so again for this homage set is a nice way to get some figures to stand out. This version of Grunt also features black hair. Hasbro at least tried to differentiate the hair color of the includees in the set. Grunt in black still makes him seem too much like Zap. And, since the Zap in the set features the same colors, the figures look like twins. This is somewhat problematic since it's not great to have two figures with identical heads portraying different characters. But, the original 13 did it to an extent so I can forgive it here.

Grunt's coloring, though, is actually fairly strong. The figure's chest is cast is a tan with a slightly greenish tint. This is covered with swaths of green and brown cammo pattern. The green is a rich, deep hue that matches Grunt's pants. The color is somewhere between Action Force green and standard olive green. It's a color that is vibrant, but also realistic and believable. Sadly, though, Grunt's details are a mixed bad. Lost is the silver from the original figure's knife that was so distinctive. But, the bomb on his leg is painted. The result is a good figure, but not a great one. The colors and cammo allow for a new interpretation of Grunt and make him appear more modern. But, for a collectors set where the figure's retail cost was nearly $4 per figure, more was expected for the set's members. Short Fuse and Zap fall into the same category. Taken in conjunction with Grunt, the figure's are OK, but not spectacular. Seeing the Scarlett, Stalker and Snake Eyes from the same set, though, shows that Hasbro was capable of more and really leaves this Grunt figure as a disappointment for what could have been.

Grunt's accessories are, basically, non sensical. He includes a helmet based on the original design. The problem is that the poor plastic quality prevents the helmet from fitting on his head in any way that is not awkward. As such, it is useless. Grunt also includes a black version of the backpack from the 1986 Hawk. While I would have liked to have seen Grunt's original pack (it was included with Stalker, though), it is a small accessory and the larger packs from later years still work on the figure and help flesh him out as more of a long range infantryman. It is Grunt's weapon that is most consternating. Rather than include the iconic M-16 that defined the American fighting man of the '80's, Grunt includes an AK-47 (originally from the Cobra Officer) that defined the Russian fighting man of the '80's. It isn't just an oversight. Such a mistake really calls into question whether the designers of the time really understood the Joe toy line at all. Fortunately, it's not hard to find M-16's from original Grunts or the 1983 Accessory pack. Even the more modern M-16 introduced in the comic packs in 2004 will work well for this figure. But, displaying this figure with his original gear just looks odd. (Though, it would have been nice for that AK-47 to have appeared again during the repaint era either with the 2004 Cobra Infantry, 2004 Comic Pack figures or the 2005 Night Watch.) It is likely the reason why this figure never much mattered to me since Grunt missing his iconic weapon rendered the figure rather moot.

As a character, Grunt never did much for me. Even as a kid in 1982 and 1983, I didn't find the figure interesting at all. In fact, when my brother got his first Grunt figures in October of 1982, I took the backpack and gave it to Clutch since he was such a better figure. The 1983 Tan Grunt brought me a bit of appreciation for the original figure due to the prominence of the silver knife. But, it wasn't enough to bring the original figure into my primary use rotation. I think that is one of the other reasons why this figure was so discarded in my collection. Since Grunt was never relevant to me, there was no reason to really appreciate the 1997 repaint. But, when I set him out on display with Zap and Short Fuse a few months ago, the figure's quality was a pleasant surprise. As supplemental crew for a VAMP Mark II or Locust Helicopter, this Grunt works very well. So, I have some new appreciation for the figure, even if the original character never intrigued me.

In general, though, the entirety of the 1997 releases have really grown on me over the past 15 years. When the set was released, we were only 3 years removed from the vintage line's retail run. (It was possible to find straggling vintage Joes still on remote retail shelves even through 1997.) So, the comparison of the 1997's to vintage was poignant and critical. That soured me on the figures as they had shortcomings in comparison to the vintage line. But, since 1997, the release of ARAH Joes actually devolved quite a bit from the 1997 releases. While the plastic quality did improve, the accessory complements and paint applications got worse. And, while Hasbro had issues with missing or incomplete molds, at least the amalgamations in 1997 tried something. Many of the later Frankensteins were lazy, haphazard of just non-sensical. To me, the '97 and '98 figures stand as a bridge between the vintage line and the modern repaints that started in 2000. The '90's figures seem to have more care in their design and accessories than was shown in the 2000's. And that has made the '90's figures hold up better than I would have ever thought possible back in 1997 when I was reading the scathing criticisms of the new retail Joes on the burgeoning Usenet and mailing lists.

Grunt was released all over the world. After the mold was used in the U.S. in 1982 and 1983, the straight armed mold was sent off to South America. There, Grunt was released in Argentina, Mexico and Brazil. The swivel arm Grunt mold showed up in both Argentina and Brazil as a single carded figure. However, it is likely that Hasbro never lost all the parts to Grunt and the molds sent to other countries were actually additional molds that were created for the early figures. The Grunt character did not appear again in a form that was an homage to his original version after this release in 1997. But, the Grunt character did return in other forms and with new mold amalgamations. It's possible that Grunt's gear was lost in South America. But, the fact that Hasbro had the gear for Scarlett, Snake Eyes, Rock and Roll, Flash, Zap and Short Fuse (most of whom were also released in other countries by other companies) would indicate that the missing original weapons for Grunt may have just been laziness.

There was a time in the early 2000's when this Grunt figure was hard to find and expensive. All of the Stars and Stripes figures were considered "rare" for a few years. The fact that Grunt included an AK-47 also made him attractive to army builders who were desperate for decent accessories for their scores of recent release army builders who were so lacking in the weapons department. For a while, this figure would easily cost $15 - $18. In time, though, the army builders found better alternatives for weapons and collectors realized that there were a lot more 1997 figures produced than they realized. (It is rumoured that the Stars and Stripes set saw a production run of 30,000 units: much higher production numbers than any of the TRU exclusives from 2003 through 2005.) As such, prices on all the figures fell with releases like Grunt becoming mostly forgotten. Today, this Grunt is a $6 to $7 figure. Not a terrible price for a decade and a half plus year old figure. And, when you consider the accessories and the fact that the mold's colors are a nice way to modernize the character, it's an easily justifiable amount. However, had I not bought the Stars and Stripes on a whim back in December of 1997, it's unlikely this figure would be a part of my collection. Owning the original Grunt, though, is more than enough to make up for not having this figure. But, he is a nice edition of a classic character and does bring an interesting diversity to some displays of the original Joe characters. 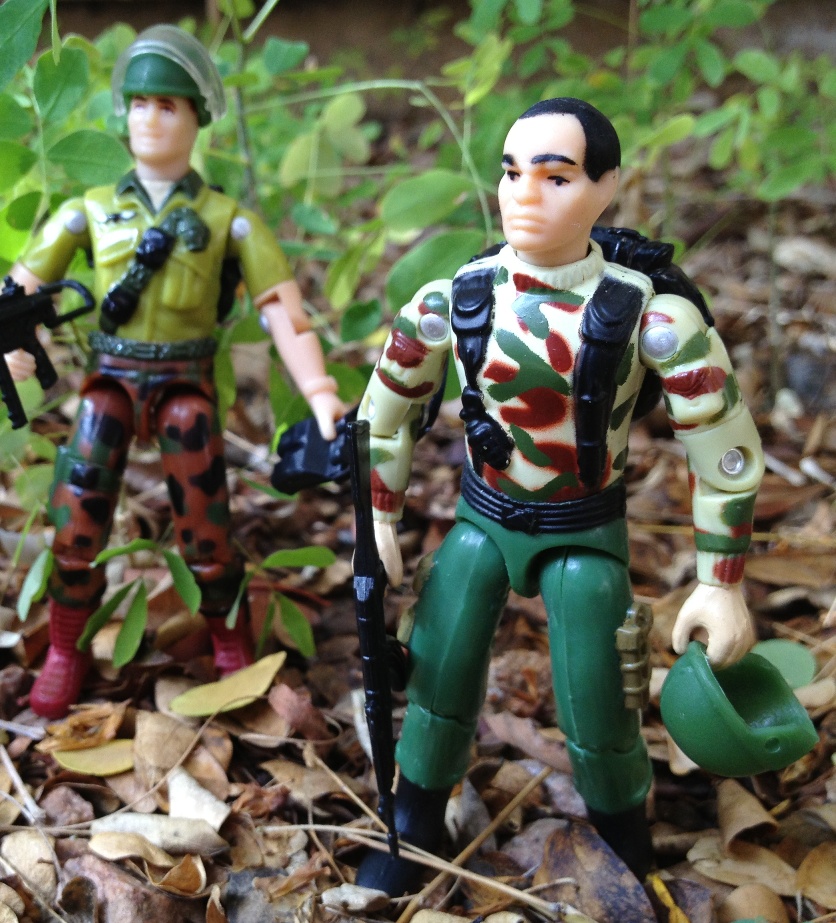 Posted by Robot_Sonic at 10:45 AM
Email ThisBlogThis!Share to TwitterShare to FacebookShare to Pinterest
Labels: 1997, Grunt, Retailer Exclusive