There are 2 kinds of foreign figures: the drastic repaint/Frankenstein figure that everyone knows about and command high prices and the figure that looks nearly identical to the American release save for some subtle foreign differences.  The difference in supply between the two is very small.  The difference in collector demand for them is astronomical.  But, each provides a collection with something that is unique, different and worth owning.  The drastic figure always grabs attention.  But, the more subtle changes on classic characters can also bring a entirely different outlook to someones collection photos.  I have found in recent years that the figures that are similar to their American counterparts released in Brazil, Argentina, Europe, China and India are an overlooked aspect of collecting that can be extremely rewarding.  Mastim (Cão Bravio), or the Brazilian exclusive Mutt, is a perfect example.

When compared side by side to an American Mutt, the differences in Mastim are very apparent.  He is deeper, darker green than the American version.  The skin tones are slightly different.  But, the most glaring difference is the missing patch on Mastim's upper left breast.  Estrela removed this distinctive portion of the Mutt mold.  The reason why remains a mystery.  But, no subsequent Mutt created from the original mold ever had this patch imprinted upon his chest again.

Mastim's accessories are also similar to the American Mutt's.  He does, though, include a different helmet.  Gone are the goggles and brim from the original.  Instead, Mastim includes a black version of the standard 1982 helmet.  It actually works for the figure, though missing Mutt's signature design is somewhat disheartening.  (This is the same helmet used for the Slaughter's Marauders Mutt.)  The remaining accessories look the same, but are Estrela quality.  As such, the softer plastic used for the leash and mask do tend to dry out over time.  This makes them more brittle than those from the American figure.

Mutt has always been a solid character in my collection.  Right from the outset, I found the figure fascinating.  It had less to do with the dog and more to do with the muzzle, nightstick and silenced pistol.  Unfortunately, my childhood Mutt belonged to my brother.  As such, the figure was not cared for in the manner to which I held my own figures.  So, the vintage Mutt didn't play as much a part of my childhood collection as I would have liked.  But, seeing the character in the comics helped keep an off conditioned figure around much longer than most other figures in our house with similar wear.  It lead to a long appreciation of the figure and character and made Mutt one of the earliest figures I acquired as an adult.  Now, he sits with his other '84 brothers waiting for a time when I have a display space fitting.  But, it's just a waiting game....

Early in my collecting career, I overlooked figures like Mastim due to the fact that he was so similar to the American figure.  However, as time went on, I realized that acquiring a figure like this allowed me to own some of the classic Joes of my youth for the first time, again.  I had a complete run of vintage figures from 1982 through 1986 minus Steeler, AVAC, Keel Haul and the Viper Pilot.  Every other figure was part of my childhood experience.  As such, the thrill of finding that new figure and experiencing how cool he was was a life experience from two or more decades ago.  But, by adding these foreign figures to my collection, I was able to experience the acquisition of some of my favorite toys again.  It wasn't that I was getting my 12th version of Mutt, I was getting a whole new take on the character from another company.  While I had an idea of what the figure was like, actually holding it in hand and seeing the color differences with my own eyes brought the joy of owning my first Mutt back to me.  I have found this time and again with many of the foreign releases.  Most of the '83-'85 figures were released somewhere else in the world.  So, the modern collector has ample opportunity to relive the joy of youth through some of the more obscure foreign figures that are available.

The Mutt mold was a world traveler...to a point.  The Hasbro figure was released in the US and Europe.  After that, it was sent to Brazil.  There, Estrela modified the mold by removing the patch on Mutt's chest.  All subsequent Mutt figures from the original mold are missing this detail.  Estrela released Mastim.  In 1989, Estrela made the Slaughter's Marauders Mutt for the American market.  This figure is Estrela quality using the modified mold.  In the early '90's, Hasbro reacquired the mold from Estrela and produced an exclusive black and blue Mutt figure that was only released in Europe.  From there, the mold disappeared.  In 2004, Hasbro resculpted Mutt's head and chest (bringing back the insignia) and released him in the Anti Venom Toys R Us exclusive set.  (It should be noted there are at least 3 variants of this figure: an unproduced dark blue figure and an unproduced light blue figure were never actually released, but were widely available from Asian Joe sellers in 2004 and 2005 and then the actual production Anti Venom figure.)  Mutt never appeared again and remains another mold that, if properly redone, could be a fun bone for Hasbro to throw vintage Joe collectors.

Mastim figures are actually not that hard to find.  In the mid 2000's, carded figures would run under $60 each.  Loose figures would sell for $15.  Now, prices have climbed and decently conditioned, complete with filecard figures will sell for $30-$40 each.  (Often, the figures are in Brazil, though, and that leads to high shipping costs which sometimes offset the sales price.)  But, usually, you can find a nice sample of Mastim every few weeks.  That makes him much more available than many of the more popular Brazilian figures who are his contemporaries.  For the price, he is definitely worth acquiring.  Mastim brings an element of uniqueness to a collection and helps differentiate displays of early Joes.  Once you get the most popular foreign repaints, it is the figures like this, with subtle changes from the domestic releases, that help to fill out a collection. 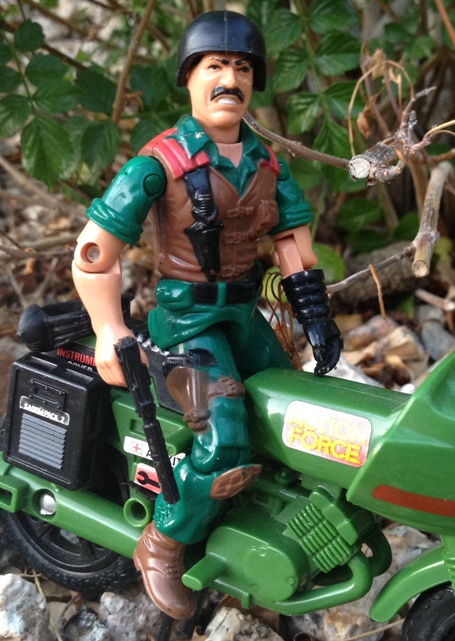 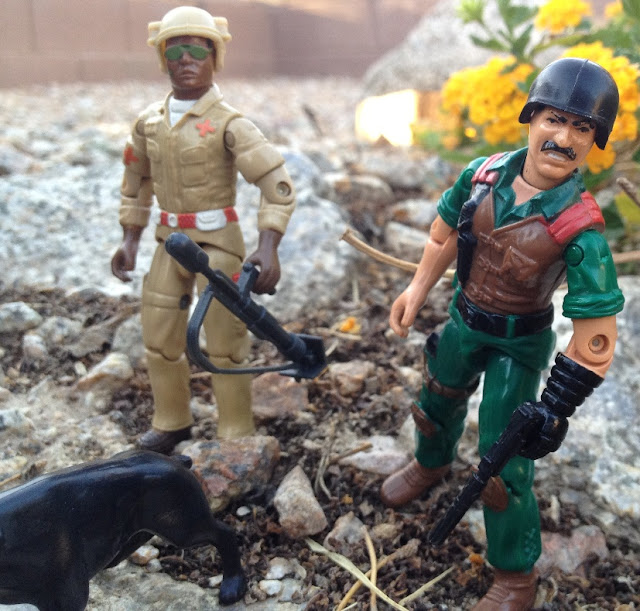 Posted by Robot_Sonic at 10:45 AM
Email ThisBlogThis!Share to TwitterShare to FacebookShare to Pinterest
Labels: Brazil, Foreign Figures, Mastim, Mutt