There are some silly figures that were produced in India. At least, they were silly for the American collector sensibility. However, in the early 2000's, Funskool didn't much care what an adult, American G.I. Joe collector thought about their products. Funskool was trying to sell as many figures as they could to kids all over India. They felt that bright, ostentatious colors were the way to attract their target market. So, Funskool put out a series of very brightly colored figures: many featuring extremely liberal use of the color orange. The result is some of the most bizarre repaints available anywhere in the world. But, when taken within the context of their release, many of these figures do have redeeming qualities and can, in the right circumstances, be a valued addition to any collection.

In 2001, American toy dealers began to import massive quantities of Funskool G.I. Joe figures. When the figures first showed up in early 2001, for most people, they were all new. However, at the time, the Funskool Desert Scorpion was a recent addition to the Funskool line. In the summer, General Hawk appeared as a new figure. But, the novelty of Funskool in general obscured the fact that the figure was new. Later in the summer, word appeared that the Crimson Guard Immortal would be the next Funskool release. As it was the height of the army building craze, collectors went batty for that figure. This release was followed up by Zartan: another figure that was well received by collectors. He was followed by Red Dog. Not a great figure, but the Caucasian skin color at least made the figure interesting. As such, when it was announced that Wild Bill would be the next Funskool figure, collectors were actually anticipating the release. But, when images of the figure appeared, disappointment reigned. The orange coloring was too much and many collectors were turned off from future Funskool offerings just because this one release didn't fit with their idea of Funskool figures being aimed at American collectors.

Colors aside, this Wild Bill is well painted. The details on the mold are brought out with the eye catching silver and gold highlights that are offset by black details. Even the two-toned boots are a nice upgrade for the figure's overall look. But, in the end, it's impossible to get past that bright orange base. Outside of a rescue Wild Bill motif, there's really no explanation for such a garish color. But, that was the point. Funskool's market research on the preferences of kids in India indicated that they were attracted to toys by bright colors. As such, for many of the post Wild Bill releases, Funskool focused on brightness, often with the base orange color. (See Grunt, Incinerator and Metal Head as examples.)

So, what do you do with a bright orange figure? Really, you can hide him as the pilot of one of the various Joe aircraft with opaque canopies. Or, you can group with with some search and rescue figures. Beyond that, though, there isn't much use for a non-astronaut figure clad is base, bright orange. That doesn't mean the figure is useless. Wild Bill is certainly a example of Funskool bizarreness that appeared in the early 2000s and he was the first of a series of rather off-beat and relatively poor Funskool new releases. So, for the cultural value, the figure is worth having around, even if he has no real use.

The Wild Bill mold was used in the U.S. In 1988, Wild Bill was expected to be the pilot to the Tiger Fly helicopter. You can see mocked up versions of the Tiger Force Wild Bill in some catalog photography. However, this figure was never produced and the Tiger Fly included Recondo in lieu of Wild Bill. The character then disappeared until it showed up in India in late 2001. The Funskool version has a few variants (notably the silver vs. black sunglasses difference.) but is readily available in most forms. It is not believed that Hasbro reacquired the Wild Bill mold so it is likely still in India.

This figure is goofy. It is campy. And, at its core, it is fun to own. There is no rational reason for having this figure outside of the fact that every collection needs something silly to offset the seriousness of the military vs. terrorist theme that is G.I. Joe. This Wild Bill fills that role admirably. Beyond that, though, it's always nice to have higher profile characters in a variety of color schemes. It helps to keep them in various displays without overdosing on the original, or otherwise best, version. In the desert colored helicopters, this Wild Bill is acceptable. That leaves the original Wild Bill to fill his role in the original Dragonfly, but still allows the character other appearances in later aircraft. Again, that's worthwhile. For the $4 it will cost you to get a MOC version of this figure, it's definitely worth it. 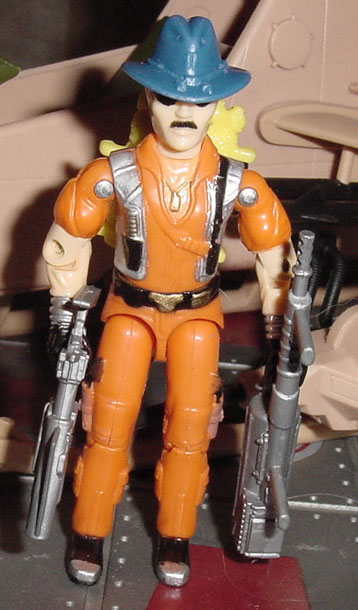 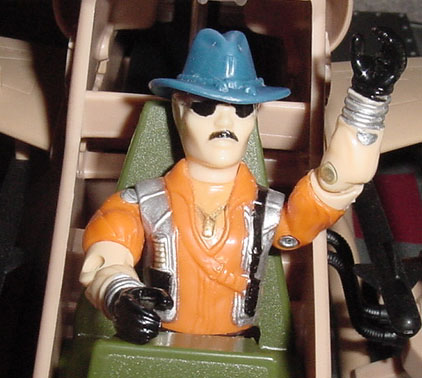