There were two ways to re-create classic characters in the vintage line: either redesign them from scratch or produce a mold and coloring that were true to the character's roots, but brought modern sculpting and design into the mix. Both approaches created a variety of all time great figures and some duds. As the line wore on, though, there were fewer and fewer of the latter option produced. But, when Hasbro got it right, they could really get it right. One such figure is the 1992 DEF Cutter figure.

The original Cutter was released in 1984 as the pilot of the iconic WHALE hovercraft. Adorned with a baseball cap, the figure was a great visual use of orange and navy blue to produce a vehicle driver worthy of such a classic watercraft. But, that original figure had some limitations. The life vest was bulky and the figure included no accessories. In 1992, Hasbro rectified that when they updated the character. This new Cutter was still sporting his traditional orange and navy blue motif. But, he was now more streamlined, had some additional, combat details on his mold and was released on a single card so he was fully accessorized. The result is a figure that is still a perfect fit for the command center on the WHALE, but can also be used as part of the combat team he transported to the mission site.

As a kid, Cutter was one of the main figures I used. This really had nothing to do with the quality of the figure or the character. It had everything to do with the fact that the WHALE was one of my favorite vehicles and remained vital to my Joe world well past the time that it was mostly broken and destroyed. I outfitted Cutter with a Scarlett crossbow from the 1983 Accessory Pack. Only, I cut off the bows so it appeared to be a spear gun. I tied a thread around the sight and Cutter would sling this weapon over his shoulder when he commanded the WHALE. But, it was available should any stray Eel attempt to board the craft. In this capacity, Cutter remained one of the most important Joes since he commanded their most important vehicle. As I got older, though, the limitations of the Cutter figure became apparent. Standing him alongside figures from 1986 and 1987 really showed how limited the original Cutter figure was. So, as the WHALE's role in my collection diminished, so did Cutter's.

If you fast forward a decade or so, though, I had a new WHALE in my collection. Naturally, I wanted Cutter to be the commander. But, with years of new figures added to my collection, the original version simply didn't cut the mustard any more. I had the 1993 Cutter figure take command of the classic hovercraft, but it wasn't the same without the traditional orange life vest. Around 1999 or so, though, I got a large lot of figures from 1992 and 1993. Included with the lot was the 1992 Cutter figure. At long last I had the perfect figure to represent the character and man the command station of one of my favorite vehicles.

From that point on, the Cutter character was only represented by this figure. He perfectly matches the WHALE since he hearkens back to Cutter's classic design. Plus, the figure is more sleek and streamlined so he looks more in place in the WHALE than even the original figure. This Cutter works well with figures from across the line's history. This cements the figure as just about the perfect upgrade. He's not on par with the 1985 Snake Eyes just due to the more obscure nature of the character. But, the level of design improvement is very close. Shockingly close for a figure released in 1992.

Cutter's accessories were memorable and terrible. The terrible starts and ends with the light up, spring loaded weapons that were standard issue with every member of the DEF. The memorable, though, starts with Cutter's rifle. While colored white, the rifle is acceptable since it would see most of its uses in a maritime setting. The detail, though, is top notch. The weapon is compact enough to make sense on a tight space like a ship. But, it is large enough to pack a wallop. The best part of Cutter, though, is the large flashlight that attaches to the figure's leg. A flashlight shouldn't be much of an accessory. But, in Cutter's case, the utilitarian nature of the flashlight, coupled with it's size just makes sense. You could see Cutter using it to probe the dark depths of the Whale's engine compartment. Or, maybe in the boiler room of the USS Flagg. But, if you got in a pinch, you could also have Cutter use the flashlight to conk the head of any poor Cobra Eel that let his guard down. The terrible is the light up grappling hook launcher. Honestly, the grappling hook and rope are, in and of themselves, decent accessories that make sense for a maritime trooper. But, the launcher is large, bulky and bright. In short, it adds nothing to the figure but a higher price point.

The Cutter mold was used twice by Hasbro: for this carded figure and as the driver of the Shark 9000 in 1993.  After that, the mold made its way to India where Funskool released Cutter for many years.  The Funskool figure is based on the American figure, but uses a much lighter blue.  Of note for that Funskool figure, though, is that the figure includes black accessories.  So, if the 1992 Cutter's white weapons don't do it for you, it's easy to get a Funskool version and replace the white weapons with black versions.  After the Funskool figure, the mold has disappeared.  It is likely that Hasbro got it back in the early 2000's.  But, it was never used and we have likely seen the end of the mold.

Due to the higher price point, the DEF figures weren't as popular as other 1992 releases.  The result is that all of them are slightly harder to find than the standard carded figures.  Mint and complete with filecard, Cutters can run as high as $12-$14.  But, you can find them for around $9 if you are willing to look around and sacrifice a bit of condition or the filecard or a few accessories.  For my money, this is the best version of Cutter ever released and he is a perfect match for the Whale.  He is well worth the price and should be a member of everyone's collection. 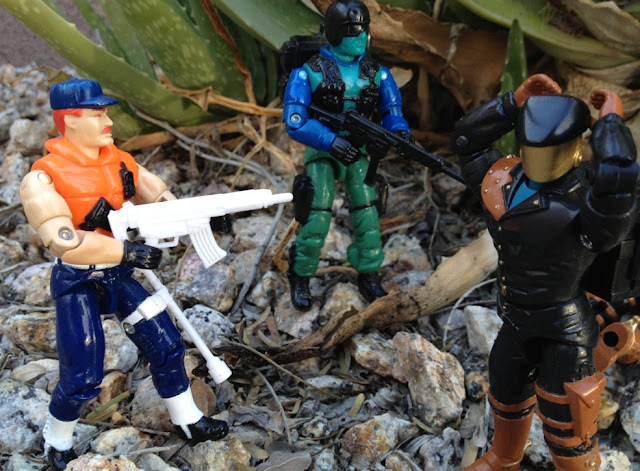 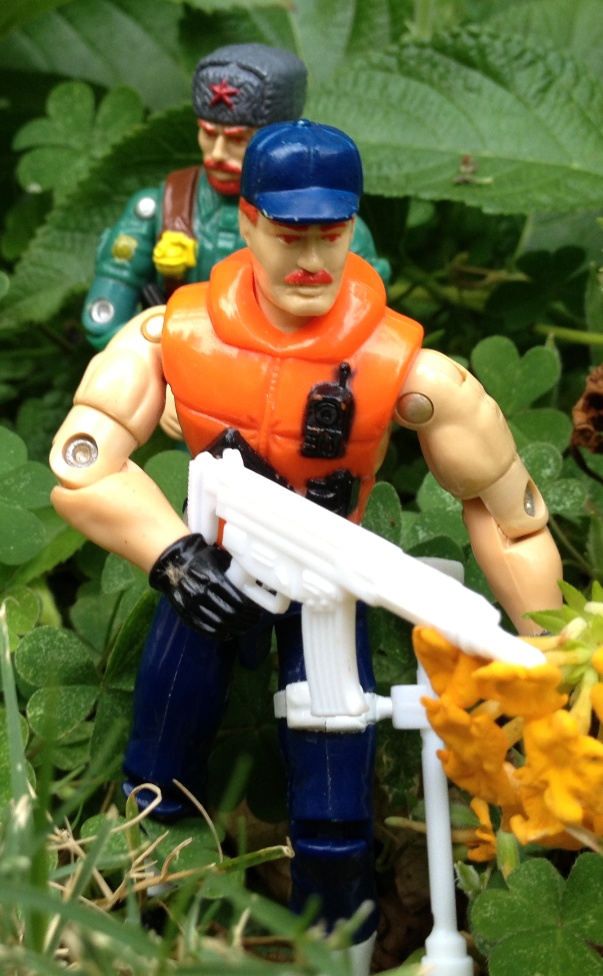 Posted by Robot_Sonic at 10:39 AM
Email ThisBlogThis!Share to TwitterShare to FacebookShare to Pinterest
Labels: 1992, Cutter, DEF