Back in 1995, Joes were still available at retail, but somewhat sparse. Most stores in my area would have a few random figures left behind. What was interesting, though, was that different stores seemed to have different assortments of figures. Sure, I'd find a 1994 Shipwreck at Target and Toys R Us. But, other stores would get different assortments. Big Lots got in waves of 1993 figures including Firefly and Leatherneck. Meijer stores would have Snow Storm and Dial Tone. Toys R Us would have Vipers and Stalkers. CVS would have Crimson Guard Commanders and Gristles. And, at the Kay Bee toy store in the Castelton mall in Indianapolis, they had Keel Haul and Backblast.

During that time, my criteria for buying figures was somewhat structured. If the figure was just too cool to pass up, it would be purchased. If the figure was a remake of a character from my childhood, I'd buy it. If the character had an accessory that was just awesome, it would become part of my collection. However, I acquired more and more figure, the offerings available at retail fell into fewer and fewer of those categories. Finally, I reduced the criteria for which a figure would quality for purchase to if it included black accessories. If the figure had black guns, I would buy him. Which is how Backblast came to enter my collection. I had tapped out the big box retailers in my area for figures I did not own. So, I sucked up the extra dollar that KB Toys charged per figure and bought a Backblast.

Upon opening the figure, though, I was pleasantly surprised. While I was aware of the 1989 Backblast figure, I had never actually owned one. So, as far as I knew, this 1993 version was a completely new mold that had been created for the character. To me, the figure was brand new and not a repaint from something I already owned. The solid green base colors kept Backblast rooted in realism and his black rifles avoided the neon accessory pratfalls that were all too common on other, otherwise decently colored 1993 and 1994 figures. The detail on his helmet and uniform were top notch and helped to sell the figure since they maintained a realistic military feel in an era that was more about character and excess. In general, the figure had a generic military vibe that was hard to find during that timeframe and allowed the figure to stand out more than it otherwise would when taken against the line as a whole.

Due to the basic appearance of the figure, Backblast became a standard infantryman who would fight against my Cobras of the time. He was not the artilleryman from the filecard, but a standard infantry trooper who was more than capable of handling multiple Cobras on his own. In this role, though, the figure stagnated. While he was fun to use when I had few figures available to me, as my collection grew, Backblast's importance faded. There were many other figures from 1988 - 1992 who could better fill the role to which I had assigned Backblast. So, they rose to prominence and Backblast faded into obscurity...so much so that I almost sold off my only version.

Fortunately, though, I held on to the figure. There is a simplicity to Backblast that makes him useful. The basic green garb and solid mold allow him to be used as background fodder or as a vehicle crewmember without losing the integrity of the display or wasting more prominent figures in these lower roles. It is a utilitarian purpose for this Backblast. But, it fits with the characters release date and makes him more valued to me than many other 1993 figures who have coloring that makes them less compatible with earlier figures and vehicles.

For the 1995 Mike T. who found this figure, Backblast's accessories were all new and amazing. No other figures I had found to that point included the same weapon tree as Backblast. And, the fact that the weapons were all in black just cemented them as among the best accessories I had seen to that point. The main rifle that you see in the photos below (originally from Cloudburst) became the default weapon for Backblast. I needed him to be an infantry trooper, so that rifle made sense. The black hand held artillery weapon (originally from the 1991 Eco Warriors) became a standard piece of equipment on my APC. It was available for any Joe who had immediate need to destroy a Cobra tank or plane.

This figure is, basically, the same mold as the original Backblast figure. The lone difference are the arms. Gone is the arm holster for Backblast's knife and the entire arm molds are from the 1990 Topside figure. It's a small difference and not one that really matters. But, it separates the two figures in a slight way. There is also a Backblast variant. The chest logo can either be large or small. My figure has the large logo that encompasses most of the free space on Backblast's shirt that is not covered by his harness and gear. A quick perusal of figures available for sale indicates that the smaller logo figure is substantially harder to find. I don't think one is really better than the other, but it's something of which the eagle eyed variant hunter should be aware.

The Backblast mold saw three uses. The original use in 1989 had, far and away, the best accessories. This 1993 version is a solid followup, but doesn't really bring anything new to the character. After this figure's release, though, the mold was sent down to Brazil. There, Estrela released Leontor. This was a new character who made up part of the Forca Fera subset. Including a crappy, molded plastic lion, Leontor was basically Backblast in the 1989 colors. (There are some subtle differences.) After Leontor, the mold disappeared. Big Boa, who was released alongside Leontor as Kangor, did show up in India in the late 1990's. Backblast may or may not have made the trip with him. The mold would have lent itself to a variety of solid potential repaints in the 2000's. But, it was not to be. Still, these three versions are enough for Backblast aficionados to track down.

Like most 1993 regularly released Battle Corps figures, this Backblast is not expensive. Carded figures run between $8-$12 and loose, mint and complete figures sell for half of that. For a figure of this quality, that's a good price. If you only want one Backblast figure, the 1989 is superior in terms of color and accessories. But, this version is a nice way to bring some diversity to the character and also use him in more than one display without having to to buy multiples of the 1989 figure. This figure is another example of someone I would not have carded about were it not for the fact that he was part of my final retail purchases in the 1990's. That gives him value to me beyond the Backblast character. For as cheap as the figure is to acquire, though, most collectors will be able to find some value in him. The solid colors, acceptable accessories and pre-existing character do make the figure worth owning. 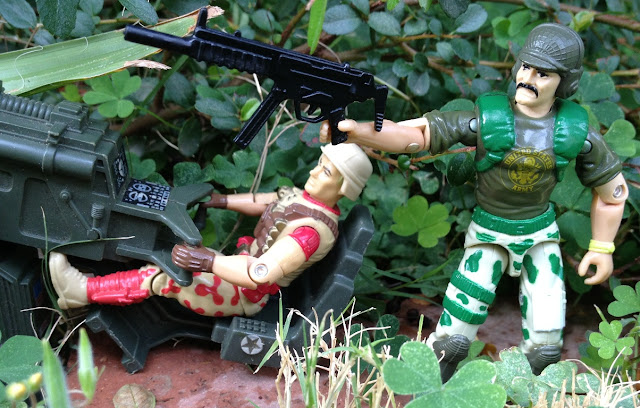 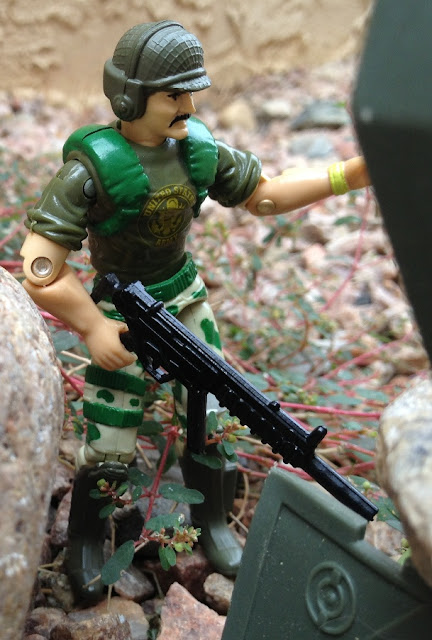 Posted by Robot_Sonic at 10:42 AM
Email ThisBlogThis!Share to TwitterShare to FacebookShare to Pinterest
Labels: 1993, Backblast, Battle Corps