Recondo is one of those classic Joe figures who has an iconic look. Upon seeing a character with the mustache, hat and jungle fatigues, every Joe fan instantly associates him with Recondo. Despite this notoriety, though, Hasbro only released the character twice in the vintage line. For fans of the figure, that left few options for them to seek out. Fortunately, the Recondo mold was licensed by Estrela for release in the Comandos Em Acao line in Brazil. Here, Recondo made a triumphant return in a color scheme very similar to his American release. The Brazilian Leopardo figure, though, has enough differences that warrant tracking it down and is a great way to have a unique Recondo in your collection. And, as a foreign version of a classic character, Leopardo is the perfect choice for the 100th figure profile on my new site.

Recondo entered my collection in the summer of 1984. I was at my aunt and uncle's house in Chillicothe, Ohio. I found the Recondo at the local K-Mart and convinced my mother to buy him for me. For some reason, we had few toys with us during that visit. As such, my main memory is of intense boredom broken only by my spells of playing with my new Recondo figure along with the Mountain Howitzer out in the driveway in the intense heat and humidity of July in Ohio. Despite that somewhat detrimental beginning, Recondo managed to flourish once I returned home. There, his excellent gear, unique look and interesting specialty all combined into a figure that saw a great deal of use through 1984 and into 1985.

In 1985, though, Recondo's star began to fade. The newly released Joes with the ball jointed heads quickly became the primary focus of my play patterns. Figures like Recondo seemed old and even a bit out dated. As 1985 turned to 1986, this trend continued and many of the early Joes who had once been my favorites now found themselves at the bottom of the Joe box, rarely seeing any action. The fact that my Recondo figure was rather worn didn't help matters. So, the character faded into a bit of obscurity for the remainder of my childhood. As an adult, though, figures like Recondo remain a mainstay of my collection. Characters and figures around which I have great memories manage to remain relevant. Every time I see them, I have a fond recollection of some after school battle from 30 years ago when all seemed easy in the world. There's value to that beyond the monetary denominations assigned to figures from the vintage line.

The main differences between the Brazilian Leopardo and the American Recondo are in subtle coloring. The most striking difference is the skin tone. While Recondo is pasty white, Leopardo features a more pinkish skin. The visual effect, though, is that Leopardo has the appearance of sun-burned skin...which actually makes sense for a jungle trooper. The other main difference is the green cammo on Leopardo's pants. While the American Recondo has a green and brown cammo variation, the Brazilian figure has very green cammo stripes. This richer color also blends better with his preferred environment. While there are sublte differences in the tans and browns on the figure, too, the last piece of interest are Leopardo's accessories. The standard issue Recondo gun and backpack are cast in green. But, it is the rich, deep, Brazilian green color that was ubiquitous across the early Estrela made figures. The same color can be found on accessories for the Ohlos de Fenix (Spirit), Fumaca (Ripcord), Comando Trevassia (General Hawk) and Muralha (Flint). It is a color unique to Brazil, but of a difference that is worthwhile tracking down.

Leopardo includes the complement of Recondo accessories. As a kid, Recondo's backpack was always one of my favorites. It is intricately detailed and full of the survival gear that any jungle explorer would need for his adventures. At the time, Recondo's pack was the most detailed infantry backpack that was available. And, I wanted to use it for as many figures as possible. When the 1985 accessory pack was released, I was happy to get some additional backpacks. But, the color was not nearly as nice as the original green. So, until more packs were released in subsequent years, my lone Recondo backpack saw use even beyond the Recondo figure. The same could not, though, be said of Recondo's weapon. While greatly detailed with the cloth wraps around the barrel, the gun never seemed to fit anyone other than Recondo. To this day, I hate the gun with any other figure, but also can't stand Recondo to have any weapon other than his original. It is one of those perfect fits where the gun and figure are meshed so well that they work. But, separate, they both suffer for the absence of the other.

Recondo saw some use as a vintage figure mold. After his first release in the U.S., the figure's mold was used for the earliest versions of Starduster. The timing of this is peculiar as Starduster first appeared in 1987. In 1988, Hasbro released the Tiger Force Recondo figure. Around this time, Starduster was changed to using parts from the vintage Duke figure. It is likely that after the Tiger Force Recondo was released, the mold was sent to South America. It's possible this timeline is a bit askew and the Brazilian figure was released earlier. But, the mold's appearance and disappearance (along with the torso for Airborne used for the Steel Brigade) seem to indicate that once the mold was sent to Estrela, it was no longer available for Hasbro's use on Asian made figures.

Like most of the early series Brazilian figures, Leopardo is not easy to find. Mint and complete figures are very difficult to track down as it seems most Leopardos saw good use from Brazilian children. Quality Leopardo figures can be purchased in the $25 - $40 range depending upon whether you acquire the figure from an American dealer, or have to pay the difference in shipping from Brazil. He is, though, a figure worth owning. The distinct coloring and burned skin tone bring something more to the figure and his Brazilian origin ties him even more to his specialty. I've long appreciated foreign releases of classic Joes whose colors are similar to the original figure's. They allow me to enjoy a new take on a great mold all over again. This Leopardo is no exception. 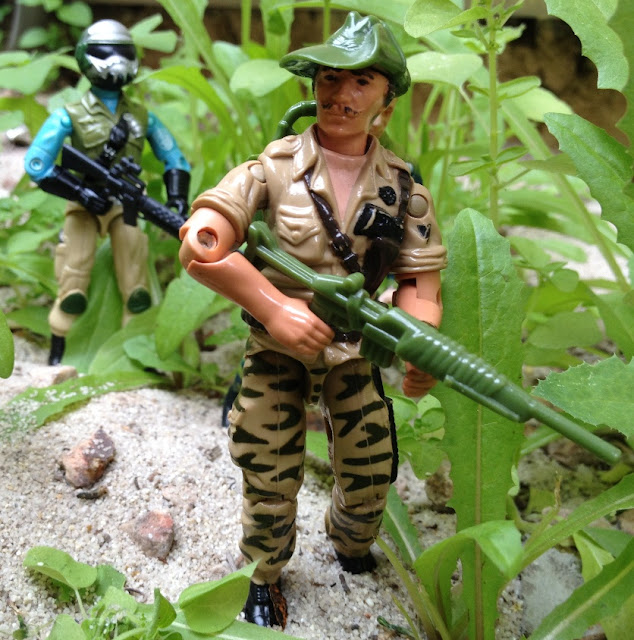 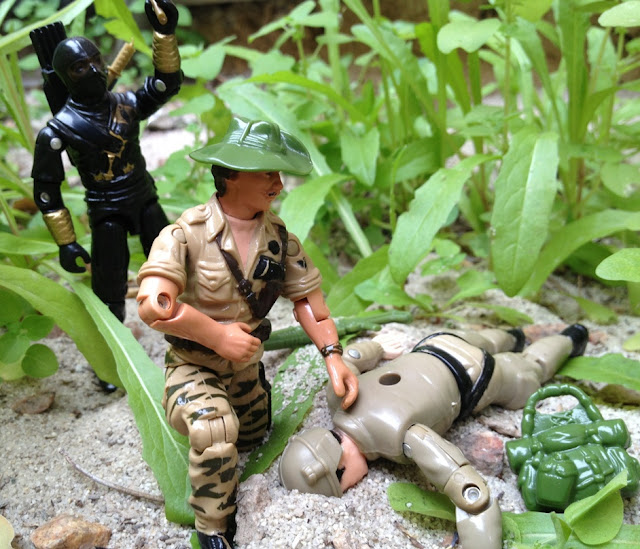 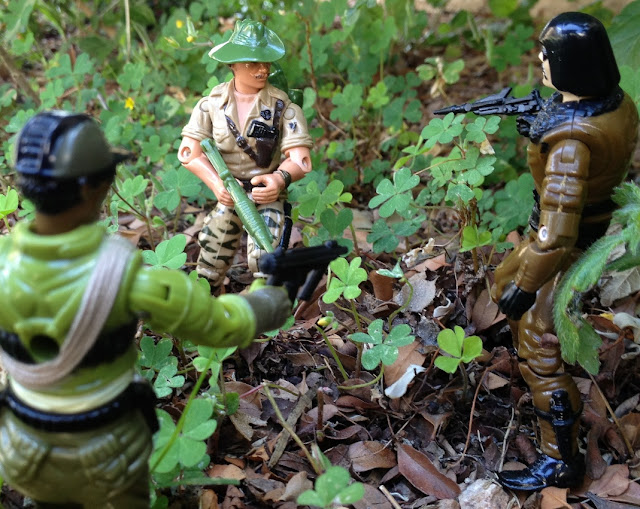 Posted by Robot_Sonic at 9:36 AM
Email ThisBlogThis!Share to TwitterShare to FacebookShare to Pinterest
Labels: Brazil, Foreign Figures, Leopardo, Recondo