Cobra Commander is one of the three most iconic characters in the Joe universe. Along with Snake Eyes and Stormshadow, he is the most recognizable Joe character. From his ruthless, hooded appearance in the first comic to the awful cartoon version, the Commander has always been one of the central forces in the Joe world. But, the Commander's look has rarely changed. The hooded and helmeted original version form the basis of most subsequent Cobra Commander versions and create a unified look. The 1987 Battle Armor version has become accepted as an alternate look for the character. But, Hasbro also tried another, new take on the character during the vintage line. In 1991, they not only released a Super Sonic Fighter homage to the original Cobra Commander design, but also an entirely new look for the character. It is not traditional and is something very different for the Commander. While it certainly has some limitations, the 1991 Cobra Commander figure does retain some attributes of prior releases and is a figure worthy of a second look.

This figure is a bit odd. There simply is no way around that fact. The suit is puffy, the helmet is ostentatious and the general look of the figure is somewhat short and squat. But, the detail of the figure overcomes some of these oddities. The base color is Cobra blue. This figure is a near perfect match for the classic blue Cobras from the line's earliest years. He is outlined with black and golden highlights: just like the 1984 Cobra Commander is. He features a prominent Cobra sigil on his chest. Really, from the neck down, this is a figure that would fit into the Cobra hierarchy from any year of the line. The helmet is where the look starts to diverge from the classic Cobra and into a more modern interpretation of the Commander. The golden helmet is adorned with a large, sculpted snake on the head. It is probably a look more befitting a new Serpentor than Cobra Commander. But, at least it stays within the Cobra motif. The real out of place look, though, is the semi-translucent red face mask. The Commander's face is obscured by the mask, but not nearly to the extent of his classic battle helmet or hood. On top of that, the Commander features exposed skin on his neck. To me, it makes the Commander more vulnerable since it was widely known that his helmet (and later his hood) were wired with explosives to prevent his identify from ever being discovered by force.

The Commander's accessories are not great: especially when taken in the context of the 1990 and 1991 accessory complements of his contemporaries. This figure includes only a golden sub machine gun. It is neither terrible nor overly exciting. But, it is unique to the figure (though later mail away figures did include it) and works as a weapon for the Commander since his history has him limited to a pistol for weaponry. The selling point of the figure, though, was a spring loaded launcher, with bi-pod, that fired a "Buzz Bomb" made of soft plastic. The Buzz Bomb features clear laminating around some interior paper design and a bright orange tip. As spring loaded weapons go, it is one of the more unique offerings. But, as an accessory for Cobra Commander, it is grossly out of place. 1991 introduced the spring loaded weapon to the G.I. Joe standard retail line. It would have been nice if Hasbro had spent the spring loaded money from this figure's accessories on something more suited to the character. But, spring loaded weapons was the way of the future and the Joe line became synonymous with them as the line wound down. At least these early versions were unique to the character with which they were included and not the more generic items that were the hallmark of the Battle Corps figures.

I first acquired this figure during the early days of my adult Joe collecting. At the time, I was so enamored with the other 1990 - 1992 figures included in the same lot that I paid this figure little attention. If you look through the nearly 15 years of photos on my sites, you will not find this figure used. He faded into obscurity since there were other, better Cobra Commander figures available. However, the traditional Cobra coloring does lend this figure to use. The bulkier sculpt meshes well with other Cobras produced in the 1990's and with many of the repaint era figures as well. This is a uniform that seems more combat ready for the Commander and that is always a bonus. But, the reality is that both the 1991 and 1993 Cobra Commander figures feature the beefier sculpt of the later years, but retain a classic look. Pairing the 1993 Cobra Commander with the 1992 Destro and 2001 Major Bludd looks normal. Replacing him with this figure offsets the classic homage. But, displayed in a Detonator with some of the later edition Alley Vipers, this figure can find a place in a collecting display.

Hasbro released this figure in 1991. However, like most of the 1991 series of figures, he was discontinued that year and was not reproduced into 1992. Instead, most of the molds that were not carried forward were given for foreign licensees. This Cobra Commander mold actually appears on the cardbacks of Brazilian figures offered in the early 1990's. (Tracker and Crimson Guard Immortal also appear.) However, the mold was never actually released in Brazil. In the late 1990's/early 2000's, the mold did start to appear in India. There, Funskool produced a version of Cobra Commander relatively similar to the American version through 2003. The mold was not among those confirmed by Funskool to have been returned to Hasbro. But, that doesn't mean it wasn't. Regardless, there are just the two version for collectors of this mold to track down. While the figure might be conducive to oddball repaints, the reality is that the better Cobra Commander molds available were much more suited to Joe's release during the repaint era.

There are at least three variants of this figure. In the U.S., the figure was released with the face beneath the mask painted with eyebrows and eyes. The black paint is visible beneath the mask. This is a fairly tough variant to find and can cost a bit to acquire. The most common version is with the unpainted face beneath the mask. The second variant to the figure is that the European release included a slightly different colored mask. It is, technically, a European variant. But, there are a lot of European variants in a similar vein that have no real extra value as they are not significant enough to warrant drastic foreign exclusive pricing. This is one such item. You will pay a premium for one, but they are not hard to find from European sellers and most collectors are not aware of the variant and really pay it little attention if they are.

One of the quirks of this figure is that Hasbro actually sculpted the Commander's face beneath the face shield. They glued the shield in place so that the face was not obvious. But, it is there. It is a wrinkled, old looking face that does not fit with canonical appearance of Cobra Commander. It is likely just a placeholder that was designed to showcase some facial features behind the mask. If you want to see the face, though, the easiest way (other than Googling it....) is to get the Funskool figure. The mask on the Funskool version is not glued in place and is easily removable. The face really doesn't fit the Cobra Commander character. But, it is a neat Easter Egg hidden beneath the mask and shows that Hasbro wanted the figure to be more than another faceless Cobra Commander version.

The 1991 figures that were discontinued that year are somewhat hard to find. The lower production numbers has made them more scarce in modern times than 1990 or 1992 figures, but they are still out there in more than adequate numbers. Pricing is a bit odd as mint and complete with filecard versions tend to sell in the $9-$12 range but carded figures can still be had for $15-$18. There are a lot of off condition and incomplete versions of this figure out there, though, that can be had for next to nothing and allow the modern collector to try his hand at customizing a version of the figure without spending too much money. Beyond that, the figure is interesting as it does blend well with many of the better Cobras from the line's later years. But, the 1993 Cobra Commander does as well. So, beyond having another look for Cobra Commander, there really is nothing compelling about the figure. But, the relative low cost makes the diversification of the character worthwhile. 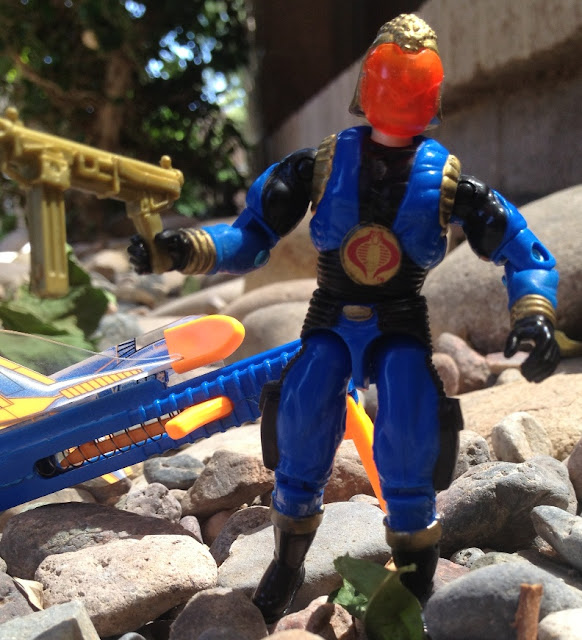 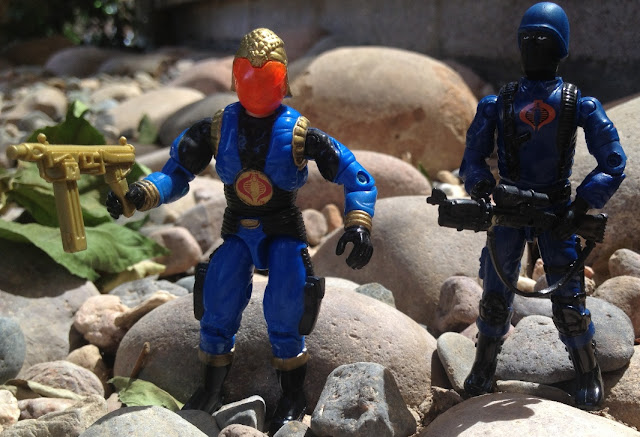 Posted by Robot_Sonic at 9:35 AM
Email ThisBlogThis!Share to TwitterShare to FacebookShare to Pinterest
Labels: 1991, Cobra Commander