The Cobra Eel is one of the most iconic Cobra army builders in the history of the Joe line.  He is generally considered the premier Cobra diver and remains a fan favorite.  Everything about the figure is the epitome of what made Joe great.  The mold is detailed, modern and sleek.  The accessories are a feat of engineering that mesh perfectly with the figure mold.  And, the figure is colored in sensible grey and black with just enough red to establish him firmly as a villain.  Hasbro was never able to top the Eel mold with their future, updated Cobra divers in the vintage line.  This leaves the Eel as a figure who stands head and shoulders above his similarly specialized brethren.  The downside was that the Eel mold was never repainted or revisted by Hasbro.  But, Eel aficionados are not left in the cold.  Hasbro did sublet the mold to South American licensees.  There, the mold was used to create some figures similar to the American versions.  One such example is the Hombre Rana from Argentina.

The Hombe Rana mold is basically identical to the American Eel.  It is the same mold and colors that are so similar they are indiscernible to the eye.  You can see a comparison in the 2nd photo below.  The main difference is the Cobra sigil on the figure's chest.  The Plastirama figure's logo is smaller and much more detailed than that of the American Eel.  That's the only real outward difference between the figures.  (Though, the Argentine figure also has the Hasbro copyright information rubbed out.)  You can tell a paint quality difference on the figure's face that's visible through the mask.  Otherwise, these figures can intersperse with American Eels and the modern collector would be none the wiser.

The Eel was one of the first new figures I acquired back in 1985.  I spent many a cold, early spring afternoon playing with the Eel and Alpine out in the front yard of my parent's home.  It had a sidewalk that split the yard in two and the end was a series of 5 concrete steps.  The sidewalk was the perfect "river" for the Eel and allowed me to use the figure in his element.  From the water, they could shoot the Joes as they tried to scale the "mountain".  Every now and then, an Eel would be swept down the waterfall to his doom.  But, such were the pratfalls of working for Cobra.

These early adventures, though, took their toll on my first Eel figure.  By the latter half of 1985, I had to buy another one as the original's accessories were lost and the figure was badly worn and broken.  This figure coincided with the addition of the Moray to my collection.  So, the Eel quickly took the co-pilot's chair on the hydrofoil when I didn't have use for actual frog-men.  This kept the Eel as a pivotal player in my childhood collection for many years...long beyond the lifespan of many other 1985 figures.  But, that is a testament to the figure's quality.  The Viper replaced the Cobra Trooper.  The Motor Viper replaced the Hiss Driver.  The Ice Viper replaced the Snow Serpent.  But, no figure from my childhood could replace the Eel.

To me, the Eel is about the perfect army builder.  The only way to improve upon the figure would be small, incremental changes that, likely, would not matter all that much when considering the figure.  The problem, of course, is that a diver is such a specialized part of any Cobra army that it's difficult to appreciate the figure beyond its visual appearance.  The accessories make the figure and you want to display them fully geared up and ready to go.  Beyond outfitting the back of a Moray, it's difficult to find a way to justify a display full of Eels with all their equipment attached.  But, collectors find ways to do so just due to the fact that the Eel is such an excellent figure.

The Hombre Rana includes the same accessories as the standard Eel.  The flippers, backpack, removable jets and speargun are almost impossible to differentiate from American Eel accessories.  The hose is very similar, but the plastic is more brittle and a bit harder than the American hose.  The upside to this is that if you can find and incomplete Hombre Rana, it's easy to outfit him with American accessories.  The Eel's weapons are, in my opinion, the best combination of dive gear Hasbro ever created for any diver figure, be they Joe or Cobra.  So, having an Eel from any country without his gear just doesn't work.

The Eel mold was released in the U.S., Argentina and Brazil.  After the Brazilian release, the mold disappeared.  During the 2000's, there was vocal collector support for the return of the Eel mold as it would look so good in Cobra blue, black or even Crimson.  But, Hasbro could not bring it to pass.  The mold was gone and they did not resculpt it.  So, collectors are left with three releases of the Eel mold that are, basically, identical.  Fortunately, the original coloring is high quality enough that the mold wasn't wasted.  But, there is so much potential in the mold, it's a shame that Hasbro was never able to bring it back to retail in the modern era.

Hombre Rana figures aren't overly difficult to find.  But, they are nowhere near as ubiquitous as some of the other Plastirama figures.  They were shipped in a case assortment that wasn't shipped to the U.S. in as great of quantities as some of the other assortments.  These days, carded figures will sell in the $50 range.  If you can find a mint, complete with filecard version, they will rarely run over $20 or so.  That's a slight premium over a mint, complete American Eel.  But, is in line with the figure's availability.  The figure, though, doesn't bring much to a collection.  Visually, the similarity with the American figure reduces the collectibility of the South American version.  But, that means that those who desire a complete of Plastirama figures can still acquire an Hombre Rana for a price that isn't absurd.  But, if you're army building or want to save some money, just get an American Eel. 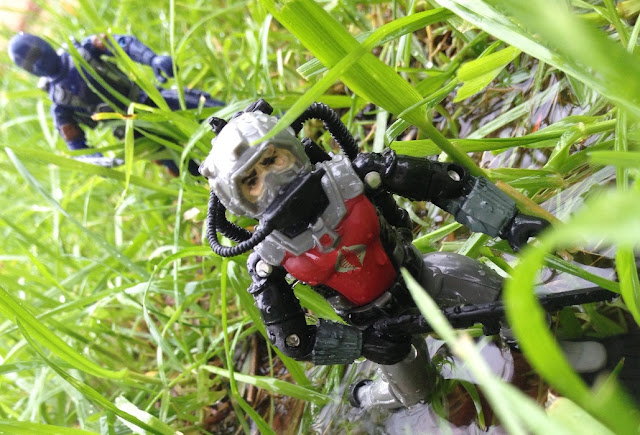 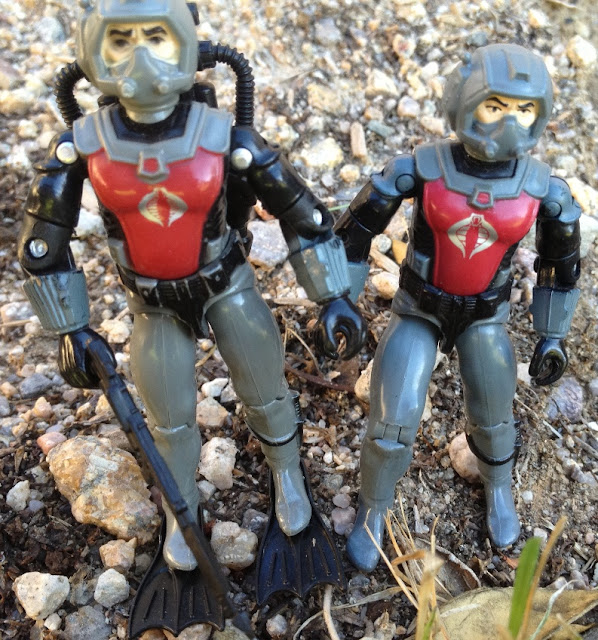