Sports themed Joes are not overly common in the line. But, they do exist. Hardball was a baseball player. While he wore a baseball cap and jersey, his overall theme was not overly tied to his baseball past. The Fridge and Sgt. Slaughter were both fashioned after real people, so their sports ties were necessary for their characters. In 1990, though, Hasbro took the concept to reductio ad absurdum with the Captain Grid Iron figure. Not only did Grid Iron feature a name directly from sports, he sported a helmet based on a football helmet and even carried football shaped grenades. (While not as bad as the Fridge's football on a stick, they are still pretty awful.) The result should be a terrible figure. And, in a lot of ways, Grid Iron is a terrible figure. But, when you take some time to review him, you realize that Captain Grid-Iron was given the same level of attention and detail as the other, less outlandish 1990 figures.

Captain Grid-Iron suffers from a fatal color flaw with bright yellow pants. Take those out of the equation, and you have a figure that is very realistically colored. The dark green flak jacket covers a lighter green cammo undershirt with sleeves. His boots match the arms and he has olive half-gloves on his hands. He has a light grey belt and boots that match his accessories. Really, if you take the yellow away, this isn't a bad figure at all. But, Hasbro decided to use the yellow pants and an otherwise strong figure was rendered largely useless because of it. I find the general look of Captain Grid-Iron to be very reminiscent of Backstop due to the yellow, grey and green mixture that forms the bases for each figure and the two would fit well together as the crew of a Persuader.

Where Grid-Iron succeeds is the general sculpt. His arms feature a texture to them that adds depth to an otherwise mundane shirt. The cammo pattern is subtle, but enough that, again, it adds some visual excitement without becoming an integral part of the overall design. The raised, quilted collar helps to hide the figure's neck beneath the helmet and creates a buttoned-up look for Grid Iron. When you add in the flak jacket with the oversized buckles, you have a general figure that could be very useful in a military or urban setting. His belt and legs have enough detail that they aren't bland. But, they aren't overdone. The simplicity of the figure is very different from the designs of prior years and works on it's own.

Grid-Iron, though, suffers from other flaws. The football motif was simply taken too far. The figure has a helmet that is based on a football helmet with the grid facemask. (There are 2 helmet variants: hard and soft plastic but neither seems to have any advantage over the other.) However, with the clear visor over it, the helmet is actually OK. It's not too over the top and looks like the type of helmet that could be plausible. The figure then features a nice cadre of grey colored weapons. Grid-Iron includes a small pistol with a silencer on the end. It's a strong accessory and one that I co-opted for Cobra when I first got this figure. He has an olive backpack and two wrist shields that are colored yellow. From here, though, the figure goes off the deep end. Grid-Iron's primary weapon is a large rifle with two handles and a scope. It's out there, but not beyond the extent to which designers were coming up with Joe weapons at the time. The folly of the weapon is that it features 4 missiles that connect tot he barrel. So, Grid-Iron would fire these missiles from a hand held weapon with no shielding. The visual of the missiles on the gun is acceptable, even if the reality would be one use and Grid-Iron would sport a burned stump where his hand used to be. The too far item, though, is the football grenades. Grid-Iron includes three of them. The notion that some defense contractor was paid to produce explosives that resemble a football is ludicrous. And, the figure suffers for it. But, the fact that the bombs attach to both the figure and his pack brings a level of utility to them that salvages them to a degree.

From a collecting perspective, I don't have much use for Captain Grid-Iron. He survived my collection purge mostly due to the fact that he was a 1990 release and I kept all my figures from that year. As a crew member of a vehicle such as the Battle Bunker, General or even Whale, Grid-Iron can be an acceptable figure. The helmet obscures his face and allows for anonymity while the vehicle would obscure his brightly colored pants. The general look of the figure could be customized into a riot police type figure. The helmet, visor and flak jacket, colored in an urban theme, could make for a good base for an updated Shockwave or Bulletproof. With these colors and without the football gear, the mold and helmet would be more realistic and likely a figure collectors could enjoy.

Captain Grid-Iron was released in the U.S. in 1990 and 1991. In the late '90's, the mold started to appear in India. Funskool produced a carded Captain Grid-Iron through 2004. These figures are even more brightly colored than the American version and are so bad they have a coolness to them. There are several variants of the Funskool figure, some harder to find than others. I've always found it odd that a country where the populace would have no real exposure to American football had a figure produced that was based on the sport. It would be the same as if Hasbro released a Cricket playing Cobra villain. But, that is part of the charm of Funskool. The mold seems to have died in India as no parts ever appeared again. It's probably OK, though, as this isn't a figure that too many people would want to see return in any form. Though, I imagine that a few collectors might be interested if they could order an example in the colors of their favorite football team.

Like many 1990 figures, mint and complete with filecard Captain Grid-Iron figures can be problematic to track down. The abundance of accessories and later release date tend to make the 1990 series of figures not as common as those from even one or two years prior. Fortunately, no one likes Captain Grid Iron. Mint and complete with filecard figures sell in the $4-$6 range and carded figures can be purchased for around $15. That's definitely cheap, but in line with the figure's popularity and generally ridiculed theme. Had this figure not been released with the yellow pants, it is likely that collectors would not ignore it to the level they do. But, he was released with yellow pants and this figure's legacy will forever be determined by that one, seemingly innocuous decision nearly 25 years ago. 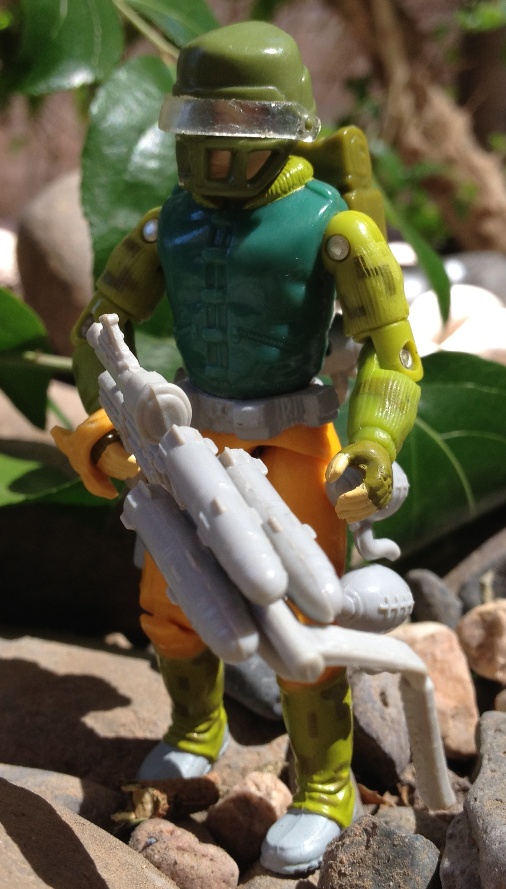 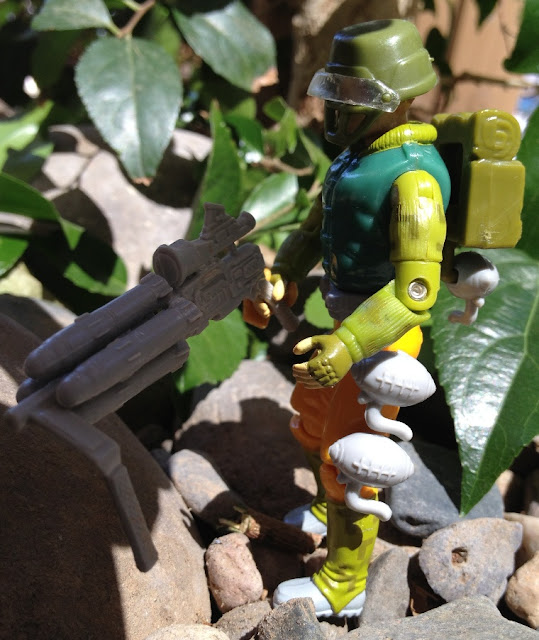 Posted by Robot_Sonic at 9:35 AM
Email ThisBlogThis!Share to TwitterShare to FacebookShare to Pinterest
Labels: 1990, Captain Grid Iron