Hasbro never released the Firebat at retail unless it was bundled with the Terrordrome.  As such, many kids who couldn't or didn't have the large Cobra base were left without one of the better small Cobra aircraft.  Hasbro tried to rectify that a few years after the Terrordrome's discontinuation by releasing the Firebat through Hasbro Direct as a mail away premium.  For a long time, the Firebat was indiscernible from the Terrordrome version.  But, at some point in the release cycle, Hasbro changed the plastic color of the Firebat from the standard maroon to a bright red.  This change was only available at the tail end of the mail away premiums and created a distinct version of the Firebat for collectors to track down and use as a supplement to the Cobra armies.

The Firebat is one of the better designed small Cobra aircraft.  It is compact, armed to the teeth and features some decent play features.  Really, that's all you can ask for from something like this.  These qualities have lead the Firebat to being a collector favorite. It is easily on par with many of the smaller Joe aircraft that were released and is compact enough to actually army build. It has guns, missiles, bombs and an excellent pilot in the AVAC figure who is clearly visible through the translucent canopy when you put the jet out on display. The sum of the parts is enough to make up for the limitations in terms of landing gear and other details.

There were very few Joe toys that were released prior to 1988 that I didn't have. The USS Flagg, MOBAT and Crossfire RC were among them. I had no interest in an RC vehicle, even if it had a unique figure. My mother would not buy us a MOBAT. And, my father told me I could not have a Flagg unless I was able to get a store to sell it to me for $50. In 1986, the Terrordrome joined the list of missing Joe toys. What's odd, though, is that I don't really have any recollection of wanting a Terrordrome. I wanted a Flagg desperately. But, by the end of 1986, I must have been occupied with other things. (I had entered junior high and that may have played a part.) By 1987, though, I was full bore into the new figures and vehicles that were released. There was just something about the Terrordrome that never spoke to me as a kid.

The Firebat, though, was one of the great misses of my childhood. I didn't know it at the time, but the Firebat was the exact thing I was looking for in my Cobra arsenal. By 1986, my Rattler had been pretty much trashed. With no other viable Cobra aircraft available, I focused my play away from air battles or air support. In time, though, I wanted to use the new Joe aircraft I had purchased. (Mostly, the Tomahawk.) But, I had no real Cobra aircraft which were not beat up and missing parts. Eventually, my youngest brother acquired the Night Raven and the drone from it became my de facto Cobra aircraft. Of course, this was limited as the figure was obscured and the drone only had guns, no missiles. (This was later solved with the drones from the Mamba.) Had I owned a Firebat, though, it would have been the perfect aircraft to battle my Joes. By 1987, the Skyhawk and Dreadnok Skyhawk were my Joe fighter jets du jour. The Firebat was a perfect size to battle them and would have been the exact toy I longed for. Only being available in the Terrordrome, though, made it unattainable and mysterious. I didn't even know anyone with a Terrordrome so it was impossible for me to see a Firebat in anything other than the pages of the G.I. Joe catalogs.

The Firebat saw release with the Terrordrome and as this mail away premium. It was never released by Hasbro again. In the 1990's, another toy company released a space jet that was based on Firebat mold. It is not clear if they reverse engineered the Firebat or if they acquired the mold from Hasbro. That vehicle drove rumors that Hasbro could not produce another Firebat. In the anniversary line, Hasbro finally resculpted the Firebat and has released it several times. This is similar to the vintage version, but has some updates to be more compatible with the anniversary line. It would have been great to see a Cobra blue or black Firebat in the repaint era. But, it never happened. During the army building craze, collectors would have bought these in droves. But, the vintage colors are interesting enough that they are useful. It just would have been nice to have a little more diversity as well.

Mail Away Firebats have gotten somewhat hard to find...at least in relation to the standard Firebat.  There are many still out there in collections, but you don't see this as often as you see the more standard maroon vehicle.  As such, you will pay a premium for the mail away version.  Typically, mint and complete versions will run upwards of $70.  Since you can get two standard Firebats and still have some change for that, it's hard to justify this different coloring unless you enjoy the variant aspect of mail away vehicles.  Had I not gotten this version from Hasbro Canada, I wouldn't have it.  It's just not worth tracking down.  But, it does mesh better with the AVAC so it has some value.  But, I'm not sure that small detail is worth the premium price you pay. 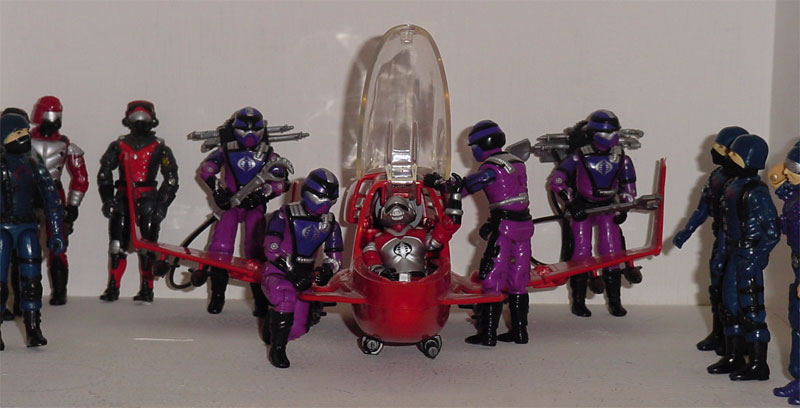 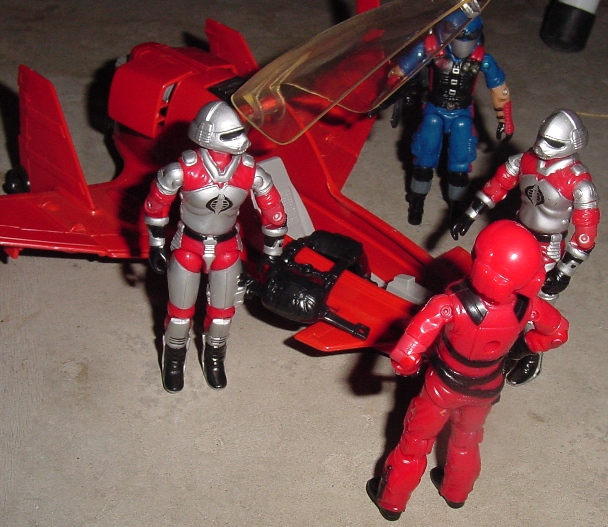 Posted by Robot_Sonic at 11:16 AM
Email ThisBlogThis!Share to TwitterShare to FacebookShare to Pinterest
Labels: 1986, Firebat, Mail Away, Vehicles