Gung Ho is one of the top tier Joe characters in the line.  He was popular from the get go in 1983 and retained much of that popularity through the current time.  His character, look and general demeanor appealed to kids and adults and has made him one of the most iconic Joe figures behind the first pantheon of Duke, Snake Eyes, Cobra Commander and Stormshadow. Hasbro revisited the Gung Ho character in 1987. At the time, remakes of existing Joe characters were few and far between. So, for Gung Ho to get this treatment was a testament to his popularity. Rather than reinterpret Gung Ho in a new combat motif, though, Hasbro went with a classic marine dress blues uniform for Gung Ho. He became the first Joe figure to be released in a ceremonial uniform rather than combat fatigues. The result was a good figure for the intention, but a rather boring toy to actually play with.

In 1987, I was flush with cash and bought pretty much every Joe I wanted. Every time I found a new figure, I would spend my lawn mowing money and add him to my collection. There were times when my younger brothers got a figure before me. But, even in those cases, if I liked the figure, I would simply buy myself another version. Every now and then, though, I came across a figure in which I had no interest. In 1987, those figures were somewhat abundant: especially on the Cobra side. Crystal Ball, Raptor and Big Boa were all figures which I let my brothers purchase and never bothered with on my own. They just didn't interest me. On the Joe side, though, there was really only one figure that fit that mold: the Dress Blues Gung Ho. In retrospect, the figure is actually very cool and a neat homage to the military. At the time, though, it was a figure in a dress uniform when I wanted combat figures for my collection. So, the figure simply had no use for me.

In the late 1990's, though, I found a use for this Gung Ho. At the time, I spent a great deal of effort on stories involving law enforcement and criminals. Figures like Chuckles represented captured Cobras who were heading off to long prison sentences. Typically, their Cobra comrades would try to free or kill them so they would not go to jail. There were two prime places for these Cobra rescue attempts: by attacking the convoy carrying the convicts to their imprisonment, or in the courtroom. The courtroom was a more unsecured place since they were in public buildings. As those dramas unfurled I realized that no court was complete without a judge. Enter this Gung Ho figure. His formal attire worked as a judge in those settings and the figure found some use for a while as either an unwitting pawn who would end captured or dead in Cobra's attempt to save their own or as an undercover co-conspirator with Cobra who would, unexpectedly, start assassinating law enforcement officers as Cobra agents freed their friends.

Marechal Do Ar isn't much different from the American Gung Ho. There are slight color differences and the Brazilian figure does not include the stickers for rank insignia. Where the Brazilian figure exceeds Gung Ho, though, is in accessories. Marechal Do Ar includes a version of the Annihilator's machine gun, Shockwave's pistol and a recolored missile firing backpack. Frankly, the gear makes no sense for a figure in this dress attire. But, it's fun to see a dress marine fully loaded with a anti-aircraft missile on his back and machine gun in his hand.

Sadly, though, that pretty much sums up Marechal Do Ar's role in my collection. He's a display piece and nothing more. He's cool when displayed among his Brazilian contemporaries since they all have familiar molds with different colors and spring loaded weapons. He can also serve as a second judge should the need arise. But, for the most part, this is a collectible figure for me and not one that serves much purpose. As the original Gung Ho had little relevance to me in childhood, the remake of this figure isn't as significant to me as are foreign remakes of my childhood favorites.

In the mid 2000's, this figure was readily available MOC for under $20.  For years, the overstock sat mostly unsold on the Joe secondary market.  But, as time passed, the supply was slowly absorbed.  Today, the figure is still fairly available, but a lot more expensive.  If left to market demand, carded versions sell in the $35 - $40 range.  But, those are few and far between.  Dealers have most of the remaining stock and typically try to sell the carded figures for around $70.  That's a bit high for this figure's popularity and availability.  But, if you want to complete a set of Brazilian Joes, it may be required at this late date to add the figure to your collection if you don't have an abundance of patience. 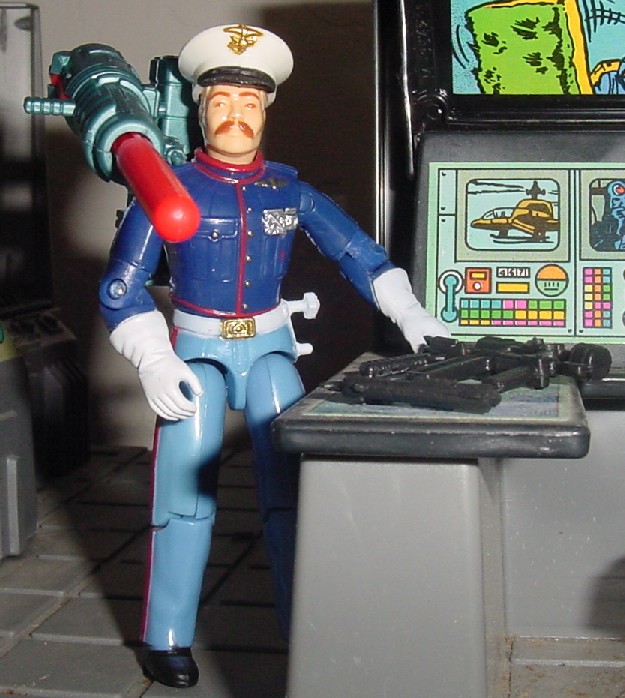