The 1993 Firefly figure was one of my first profiles ever written, way back in April of 2000.  That was a lifetime ago (technically, a little more than a third of a lifetime ago!) and the way I approach collecting has vastly changed.  What has not changed, though, is my appreciation of this figure.  Sure, it has flaws.  But, those flaws are what makes it interesting to me.

This figure is visually stunning.  Sure, he's bright.  But, the color is hallmark of his release time and is something, now, that seems very firm in establishing this figure as a design of the 1990's.  The neon green, offset by black and accented in gold, though, is a strong combination that lets this figure stand apart from many of the other neon monsters that were his contemporaries.  The figure's colors are complimentary and avoid some of the clashes of brightness that appeared all too often on similar figures.

As a mold, the design is excellent.  Firefly's head is a nicely updated helmet and mask combo that offers him more protection.  The texture ties him to the body but also gives him depth that a smooth helmet would lose.  The torso continues the trend with a textured armor that covers his shoulders and chest.  Again, this figure is more protected than the jumpsuit clad original figure.  His bandolier contains painted pockets, grenades and detonators.  Firefly carries a garrote on his waist.  Just in case you forgot that Firefly is a dangerous badass, this little detail reminds you that Hasbro always envisioned Cobra as a legitimately dangerous foe and not the cartoon buffoons.  The figure's legs feature more explosives and his arms retail the armored pattern from his chest.  In short, the figure is well put together and was designed in totality rather than the designers trying to mix and match existing parts.

My first encounter with this mold was around Christmas of 1992.  I went to the local Toys R Us at lunch and found the grey 1992 version of this figure.  As he was Firefly, he was among the figures I purchased that day.  The black, 1993 figure, though, joined my collection a few years later.  I was in the Big Lots in my college town and found a few pegs of 1993 G.I. Joe figures for 1.99.  I had about $5 to my name and could only get two figures.  I picked up a 1993 Leatherneck and this Firefly.  I had noticed that the black paint was different.  And, as variants were popular at the time, I figured I should get him.  Once I had him, though, the grey version was retired and this black trimmed Firefly rose to prominence.

I used this Firefly as a new field general rather than Firefly, though.  He was a fast attack commander who was extremely dangerous, but well loved by his troops.  In the summer of 1994, I sketched out some basic character outlines on index cards while I was answering phones at a real estate office.  Those cards formed the backbone of my new Cobra.  Once I had the characters, I simply had to find figures that matched the personalities.  This Firefly figure was the first to be matched up.  (Mostly because I already had him and needed a character for him.)  But, once given that new character, the Firefly became rather useful.  I incorporated the bright colors into his personality in that he was not afraid to attract attention to himself.  This allowed me to reconcile the bright colors of the time and make the figures of that era useful.

In time, though, the newness of the final figures I bought at retail in the mid 1990's wore off.  They were replaced by the masses of new figures from all years I was now able to buy on the secondary market.  Soon, Hasbro started making new figures and my old favorites fell further and further into obscurity.  These days, though, pretty much all figures are old hat.  I've had so many of them for so long that everything has a staleness to it.  That has allowed me, though, to go back find some of favorites like this Firefly.  They bring up fond memories of old times.  But, they also bring around a chance to re-appreciate the figure.  I've been reviewing figures for a long time.  And, the eye I bring to it now is far different that my perspective from long ago.  So, it's fun to dust off a figure like this and appreciate it once again in a new light.

This Firefly mold only appeared from Hasbro in 1992 and 1993.  After that, the mold completely disappeared.  Well, not completely.  While the figure mold never appeared again, Firefly's excellent rifle did show up in 2000's era convention sets.  Its appearance was not, necessarily, an indication that the mold was available and not used.  But, it is a strong hint at the possibility.  If the mold was available, Hasbro missed a golden opportunity.  The V1 Firefly mold was released by Hasbro ad naseum through the 2000's.  Had even one of those figures been replaced with the 1992 mold, repainted like the V1 figure, collectors would not have bemoaned the inclusion of Firefly in so many subsets.  (Though, I suspect that the commonality of Firefly was due to the fact that his mold was available and cheap to produce rather than anything truly sinister.)  Aside from that obvious repaint, Hasbro could have milked the body for any number of Cobra army builder upgrades.  I always lament we never saw a Cobra marine.  And, the custom figure I envisioned for that specialty always included parts from this Firefly figure.

Like most brightly colored 1993 figures, Firefly is relatively cheap to acquire.  Loose mint and complete figures sell around $5.  But, you can get a carded version for $10.  Either is an acceptable way to pick up the figure.  The neon green is a nice juxtaposition against the black and gold highlights.  It's also a great reminder of the early 1990's and the bright colors that found favor in that time.  It's tough to see this figure as Firefly, just because the original version of the character is so iconic.  But, this appearance had a nice run in the comics and would, were the green more muted, have been a really strong second act for the character.  As a novelty and nostalgic favorite, I appreciate this mold.  As a collector, I lament it never saw a better paint job.  But, collectors are starting to come around on '90's Joes.  The wacky neon colors are less irksome when you are trying to collect them all and complete a set.  I doubt it will ever lead to massive pricing upticks for these figures.  But, it is nice to see molds like this not being offhandedly discarded just due to their color. 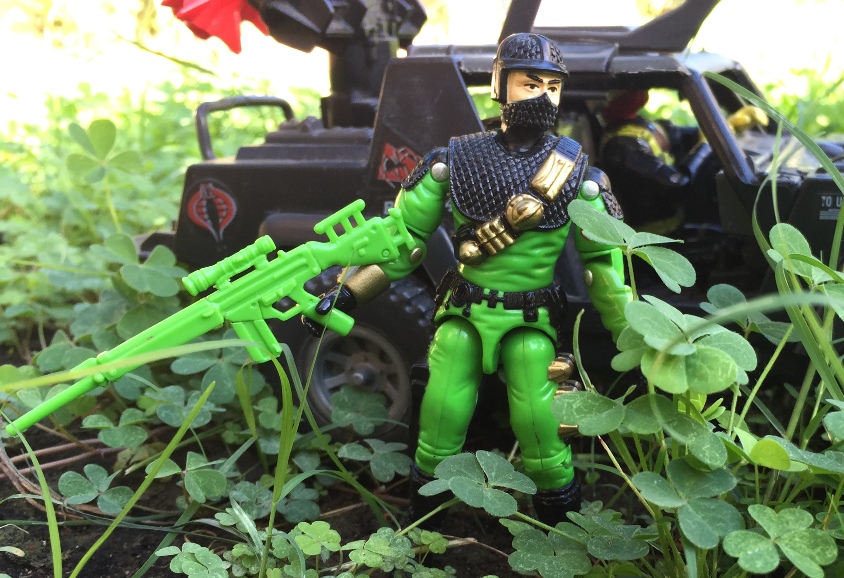 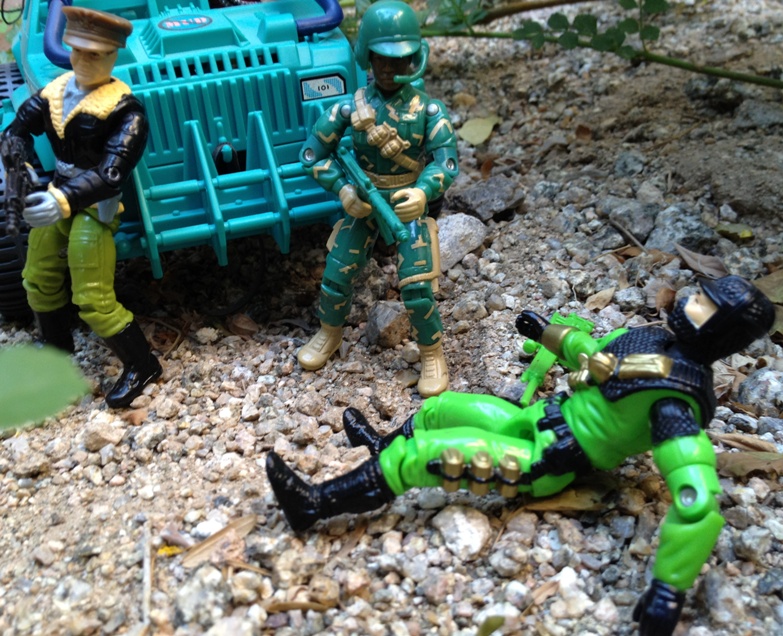 Posted by Robot_Sonic at 3:22 AM
Email ThisBlogThis!Share to TwitterShare to FacebookShare to Pinterest
Labels: 1993, Battle Corps, Firefly