In 2003 and 2004, Star Wars burnout was taking hold.  The first two prequel movies had not, exactly, lived up to the hype.  Hasbro's figure offerings for "Attack of the Clones" were generally awful as they were more focused on play features than being actual, good toys.  Collector interest fizzled as the final waves of Hasbro figures found their way to clearance stores and specially discounted multi packs as a way to get rid of overstock.  There was little indication that "Revenge of the Sith" would go on to break box office records.  But, Lucasfilm did have a little something planned.  In 2003, the Cartoon Network began airing short, animated "Clone Wars" cartoons.  These 3 minute set pieces were designed to keep Star Wars in the minds of the fans and win over new kids from the network.  The early sketches were self contained vignettes that focused on a specific character or two within a specific story frameword.  One of the first featured Kit Fisto battling on Mon Cala: the homeworld of the Quarren and Mon Calamari.

Kit Fisto was introduced in "Attack of the Clones".  His distinctive look and goofy smile paved the way for him to become a fan favorite.  As soon as I saw him on screen, I was hooked on the character.  I wanted to know his story and get an action figure of him.  Alas, the first figure released of him was an action attack monstrosity that simply couldn't hold my interest.  When I saw this figure, though, I was hooked.  The green color, unique design and simply fun aspect of the character was both visually stunning and in line with the grinning countenance that was the hallmark of Kit Fisto's introduction.

The "Clone Wars" microseries was, finally, a look into the Jedi that I had always imagined.  In "A New Hope", Ben Kenobi hints that the Jedi had been a powerful force of good in the galaxy.  However, in the prequels, the Jedi didn't do much through the first two films.  We saw a Jedi Master get killed by a Sith Apprentice.  This, alone, is forgivable.  However, when we see the Jedi Council in the second film, it has many different members: due to the Jedi from "The Phantom Menace" getting killed.  As if this implication that Jedi Masters die frequently wasn't enough, the culmination of "Attack of the Clones" was watching the Jedi get cut to ribbons by lame Battle Droids.  These "great warriors" turned out to be pretty bad at dodging laser blasts and pretty much just fell dead with no fanfare.  It was a terrible dose of reality that differed greatly from my vision of Jedi formed as a child.

The "Clone Wars", though, changed that.  While their abilities were exaggerated, the Jedi in this series were master combatants.  While they did perish, it was at the hands of a powerful villain.  Jedi weren't just felled by random laser blasts.  They put up a fight and showed why the galaxy was in awe of them.  Kit Fisto played a small part in one of the earliest episodes.  As the figure showcases, Kit doffs his shirt and fights the Separatist leaning Quarren on their home world.  Here, he leads a band of underwater Clone Troopers to victory, his lightsaber proving a valued weapon under water.  This marked the first time we'd seen underwater combat in Star Wars and also introduced the underwater capabilities of the lightsaber.

This Kit Fisto, along with the character who survived "Attack of the Clones" looked poised for greatness.  Alas, it wasn't to be. While Fisto was among the four Jedi dispatched to take out Palpatine, he also perished in his quest.  In the novel, Fisto was quickly beheaded by Palpatine.  In the film, he went out lamely with just a quick saber flash before the battle even began.  I suspect that the visual practicality of beheading a character with long tentacles would have been more gruesome than the film producers wanted.  So, Fisto went out much more benignly in the film.  It was a poor end for a good character.

As a figure, this Kit Fisto is very dated.  Being a 2003 release leaves him with excellent sculpting, but limited articulation.  He features the standard 6 points of articulation that had been standard since the line's revival in 1995.  But, the figure features two upgrades.  On is a ball jointed head.  For humans, such a head can be problematic.  For fantastic aliens like Kit Fisto, though, it can work wonders.  It allowed for more freedom in sculpting his tentacular head and gives him greater range of motion.  It is a substantial upgrade.  The change is that the figure has articulated ankles.  These were provided so the figure could be posed "swimming".  It's a fun feature, but not overly practical.  I'd have preferred knee or elbow joints.  But, super articulated figures didn't really exist until 2005.  At the time, this figure was good enough.  As the years progressed, the limited mobility has dated the figure.  But, the sculpting and proportions are strong enough that the figure still has a loyal following, despite the mold's limitations.

For me, the figure is good enough.  Star Wars figures are for display.  While it's cool to get a Clone Trooper into an elaborate pose that emulates the movie, it is not a necessity.  This Kit Fisto looks very good standing among my limited collection.  That's all I ask from any Star Wars figure.  Sure, I love extra pose-ability and tons of gear.  But, they can also distract from the fact that some figures, despite being super articulated, are not that good.  Conversely, some that are not well articulated, like this Kit Fisto, can also be great figures in their own right.  Star Wars has shown collectors that sculpting tends to rule all.  And, with maybe more than 3,000 figures produced in the last 20 years, collectors can be discerning when building a collection.

When Lucasfilm created their CGI "Clone Wars" series in the post "Sith" world, they were left with a conundrum: what to do with the pre-existing Clone Wars stories.  Sadly, the answer was to retcon them out of existence.  The DVDs were discontinued and stories were abandoned.  A few people gave some disparaging quotes against the series.  But, despite this, fan interest remained.  Hasbro continued to mine the franchise for figures well into the late 2000's.  Many of the releases were very well done and found strong fan support and interest.  The re-release of this Kit Fisto was further evidence that the series was enjoyed well after it's demise.  Personally, I found my almost non-existent Star Wars interest rekindled by the "Clone Wars" and that continued with "Revenge of the Sith".  I began a long run of Star Wars collecting that coincided with, arguably, the best release years for collector themed figures in terms of character selection, army building, availability, price point and toy quality.

There was a time when this figure, MOC, was hard to find, extremely desirable and very expensive.  The Clone Wars figures of this era didn't see a huge production run.  And, as collectors flocked back to the hobby in the wake of "Revenge of the Sith", the demand simply overwhelmed the supply.  The ARC Troopers from the line were fetching over $100 for MOC samples.  Figures like this Kit Fisto would jump into the $30+ range routinely.  Slowly, though, this trend abated.  First, Hasbro re-released many of the Clone Wars figures during their market onslaught in 2006 through 2008.  If that weren't enough, they also revisited many of the characters from the Clone Wars line and created new and better molds that were more available and greatly surpassed those of the Clone Wars era.  As such, this figure is basically worthless today.  MOC figures can be had for $2.  (Though, $8 is more common.)  If you can find anyone selling the figure loose, he can be had even cheaper.  The same figure was re-released in 2006 on Saga Legends packaging.  A slight color variation with a cloak was released in 2008.  So, there's a few options for the figure out there at varying price points.  At this time, it looks unlikely this mold or appearance of the character will be revisited anytime soon by Hasbro.  But, again, this mold is good enough for me and I'm glad to have the figure in my collection. 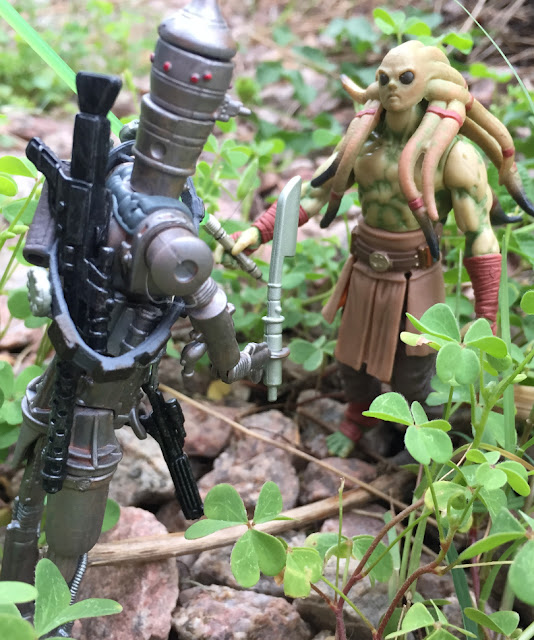 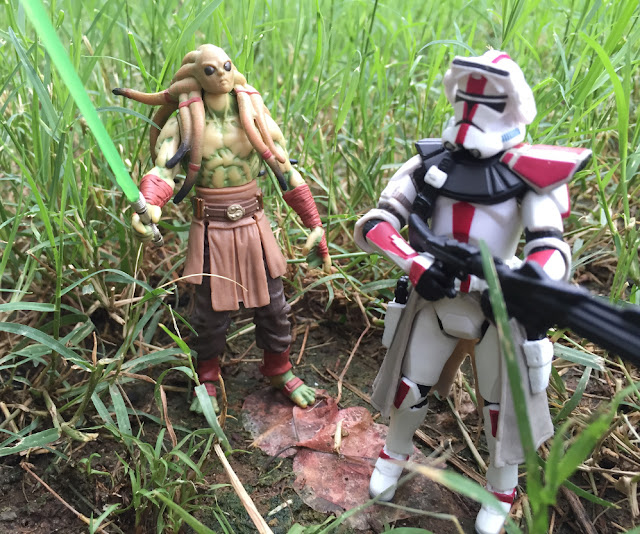 Posted by Robot_Sonic at 3:00 AM
Email ThisBlogThis!Share to TwitterShare to FacebookShare to Pinterest
Labels: Features, Kit Fisto, Star Wars