I have never reviewed a G.I. Joe comic book.  For me, the passion of G.I. Joe collecting has always been about the toys.  Yet, the comic has been intertwined with those toys almost from day one.  From a dog eared copy of G.I. Joe #10 that was passed around my grade school class room to discovering #27 on a comic rack at the local drug store in the summer of 1984 to picking up issues on my trips home from college, the Joe comic bridged the gap at times when the toys were not a part of my life.  Larry Hama made the characters real and interesting.  He made the comic more than just an advertisement for the toys and wrote a book that I continued to follow after my interest in Spider Man, the Avengers and Captain America had all abated.  As the '90's progressed, though, the comic became more muddled.  So much story had been told that it was getting difficult to bring all the pieces together.  In 1994, though, the comic was starting to return to its roots.  Many of Cobra's top characters were brainwashed back into the Cobra fold.  You saw that the comic was attempting a slow reboot to bring itself back to the classic Joe vs. Cobra motif with the Cobras we all know and loved.  Then, issue #155 happened.

For those who recall 1994, it was a very different time.  The internet was still mostly text based and the majority of people who were on it used it for email.  The internet population was heavily college students and technophiles.  While rumors and discussion were available, you had to spend time to seek them out.  News was still reported in paper publications.  And, if you didn't follow any of the toy magazines of the time, you wouldn't have known that the G.I. Joe line had been cancelled.  As a casual observer, it was obvious that the line was in decline.  While nearly an entire aisle had been dedicated to Joe toys just a few years prior, the product was now sparsely stocked and only had limited shelf space at many retailers.  Joe was losing out to the new toys of the day.  At my local comic shop, new issues of G.I. Joe used to have two stacks of fresh books stocked in prime viewing location when each monthly issue arrived.  Now, it was just one stack, 1/2 filled and on the top shelf where it was difficult to see and the prior month (my shop always kept the prior month and current month on their new book shelves) would often get buried by a more popular X-Men title overflow.  G.I. Joe's dominance was fading.

The summer of 1994 was very good to me, personally.  My sophomore year of college had gone exceptionally well and I had found a good group of friends and activities about which I was passionate.  I found myself in an unfamiliar position when I returned home from the summer where I had a job that paid me well enough, but also afforded me free time and weekends off where I could pursue my hobbies.  When I returned to school in the fall, the trend continued. Things were going very well.  Well enough that I only returned home for Thanksgiving and then Christmas.  (Normally, I would go back for the various 3 day weekends, etc.)  My college town was tiny and had no outlet that sold comics.  So, it was only on break when I could pick up new books.  Usually, I was home every 4 to 6 weeks and this wasn't an issue.  But, in 1994, I left for school in late August and didn't return until November.

In my first excursion to the local comic shop, I found G.I. Joe #155.  Just looking at the cover, I knew that the end had come.  I bought the issue, took it home and read it.  Upon it's completion, the G.I. Joe story was over.  While it was somewhat shocking to read, it also wasn't completely unsurprising.  A friend of mine worked at the local comic store and I ran into him a few days later.  We got to talking and he indicated that the sales were sliding and their orders were way down.  But, as a fan of the comic, he also felt the ending was abrupt.  Cobra was just getting dangerous again and it seemed as if there were all these unresolved story lines regarding the characters.  But, it was done.

All this, though, leads to the story itself.  G.I. Joe was, at its core, a conflict book.  It was about heroes and villains that had battled for the better part of 12 years.  But, G.I. Joe was not an owned license where leaving the characters unresolved would be a way for an enterprising writer to resurrect them a decade or so later.  Everything in the mythos pointed to a final conflict where Joe vs. Cobra could finally be resolved.  But, 155 went in a completely different direction.  Instead of showcasing the final battles between the major players, it went with a more somber and, in my opinion, impactful tact.  Cobra made no appearance at all.  And, the entirety of the book was an exchange of letters between the son of Wade Collins and Snake Eyes.

It was the insight into Snake Eye's thoughts that was the most interesting.  We had seen Snake Eye's actions for years.  There were a few occasions where we got to see some words: either written or spoken.  (My favorite was in G.I. Joe #4 where he was highly critical of Hawk, his commanding officer.  That spoke volumes into how Snake Eyes was regarded and respected within the Joes.)  His letter back to Sean Collins is rather meaningful and provides a summation of Larry Hama's G.I. Joe that nicely wraps up the series.

Snake Eyes doesn't sugar coat his message.  It is straight and to the point.  His military experience was full of personal value.  He found camaraderie among the soldiers and learned to respect the values of honor, bravery and integrity they brought to their duty.  But, he was also practically cynical.  Snake Eyes spared no words in describing how a nation may turn their back on the warriors.  He laid out the good stories of brave men who served their country for the right reasons.  But, they died in that cause.  Their deaths were not particularly noble.  In fact, Dickie and Ramon were viewed as little more than random casualties whose contributions to the nation were left as a carved name on a wall.  For me, the most poignant line was where Snake Eyes said a soldier's pension isn't enough to survive without food stamps.  There were many Larry Hama lines in the course of the series that stuck with me.  Some were funny.  Others were banter.  Others were serious.  It was the food stamps line, though, that was his final contribution to library of memories.

As a comic, I find the artwork in the mid 1990's Joe titles to be atrocious.  But, it was also in line with the style at the time.  There was a movement away from realism and the art had begun its trend of exaggerated muscles and limbs.  One panel of Wade Collins is particularly bad.  He is sublimely thin, but still chiseled in a way that would make the most dedicated HGH user jealous.  He also has horrible, tinted '90's glasses that really date him.  My other beef with the art in general is that most of the Joes in the book are in looks that are at least close to their most iconic appearances.  Except for Scarlett.  As you can see on the cover and in the sample panel below, Scarlett is in her highly colorful Ninja Force outfit.  (Though, to be fair, Snake Eyes' look is heavily based on the 1993 Snake Eyes mold.)  She looks very out of place with the other Joes.  But, that was a sign of the times and does help place the book into proper context.

There was a time when comic books were very expensive.  But, like many of the collectibles from the '80's and 90's, they lost quite a bit of value over time.  Issues of G.I. Joe that cost $5 or $6 back in the early 1990's can now, 25 years later, be had for 1/2 that.  G.I. Joe #155 is an exception, though.  It is a pricey book.  The low production run, final issue status and quality of the story have kept it a prized piece of Joe lore.  Ungraded, but high quality copies of the issue run between $60 and $70.  High graded books, of course, will fetch substantially more.  It's a lot to pay for a comic these days.  And, had I not been buying these issues as they were released, I would not own this book.  But, that would be a shame.  The final story is a fitting nail in Joe's coffin. 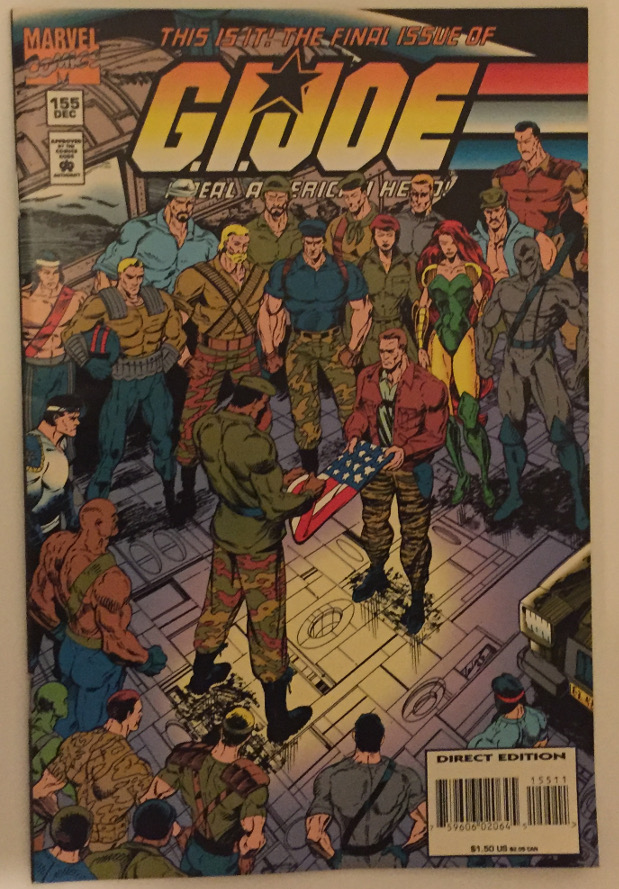 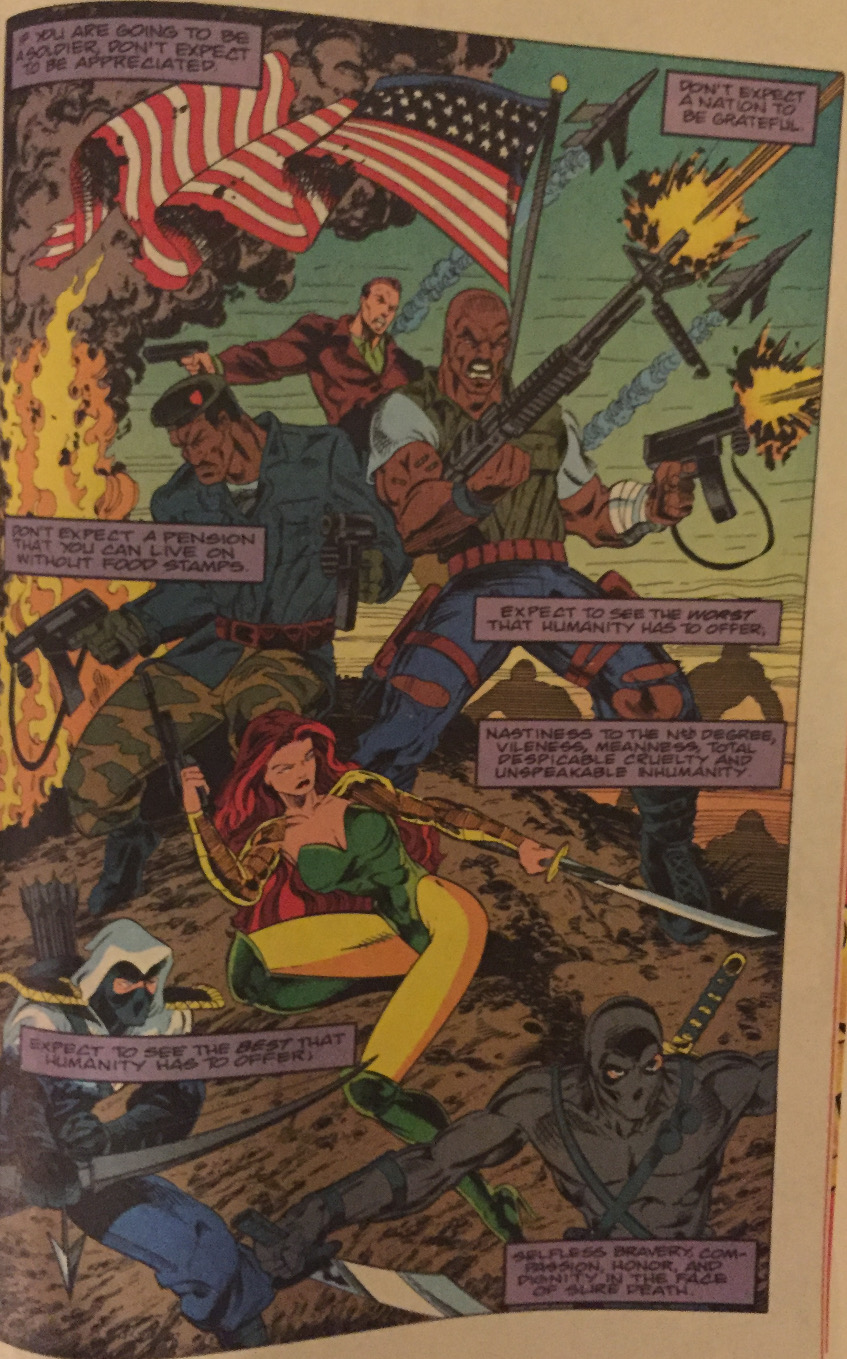 Posted by Robot_Sonic at 3:00 AM
Email ThisBlogThis!Share to TwitterShare to FacebookShare to Pinterest
Labels: Marvel Comics