Battle Force 2000 were some of the final figures to enter my collection.  I found them at the local Toys R Us in December of 1987.  I bought two figures: Blaster and Knockdown.  My youngest brother bought himself a Maverick and my middle brother bought a Dodger.  In retrospect, I have no idea why I chose Knockdown over Dodger or Blocker.  Maybe I liked the helmet.  Regardless, my two figures became a large part of the final days of my collection.  The other two figures were around, but never got the characterization that was reserved for toys I owned: rather than those of my brothers.  Dodger, though, is a pretty strong figure.  He has some flaws.  But, they are forgivable due to his generally strong color and mold design.

I have only one real memory of Dodger.  In late 1987, I put together a small team of Joes who were the crew on a truck carrying the SLAM.  The truck was an in scale, dime store special plastic military drab dump truck.  But, it held the SLAM perfectly and you could fit figures inside the cab and on the steps leading to the doors (which were molded and did not open).  The premise was simple.  The Joes had this truck carrying cargo in addition to the SLAM.  Cobra wanted the cargo and would attack.  However, in order to keep Cobra from cutting in on the Joe communications network and learning how the team was functioning, the Joes instituted a "modular" communications network in the truck.  Each member of the team had to wear a communications device in order to speak with their cohorts.  The system was closed and not intercept-able.  So, the figures chosen for the mission had to have comms gear as part of their mold.  Sneak Peek, Lift Ticket, Dial Tone and Fast Draw were mainstays as this scenario played out.  With his microphone, Dodger was an integral part of the team.

This mission saw variations played out for a few weeks as my time playing with toys came to end.  Often, the truck's cargo were the plans to defeat Cobra once and for all.  Ultimately, though, this final battle never came to be.  I simply packed up my toys and put them away for several years.  But, I was left with a memory of a figure that was otherwise inconsequential to me.  Dodger was a valuable crew member, often driving the truck.  There were times he was the first to die.  But, in others, he made it to the end.  His comm device made him useful.  In later years, a rough conditioned Dodger did find time as a Joe affiliated army builder.  He was the nameless minion of the army who would battle Cobra legions, only to fall before the Joes would arrive to save the day.  But, after that, Dodger simply faded away.  In my years buying up lots of 1986 - 1990 figures, Battle Force 2000 guys were few and far between.  The only Blaster I've ever owned is the one I bought in 1987.  I had to actively acquire Blocker.  They just didn't show up in the figures lots of the time.  The figures, though, are readily available.  But, they just eluded me.  And, that aided in their irrelevance.

Dodger only included a gun.  All of the Battle Force 2000 were skimpy on accessories.  That may be a function of them being planned as a lower production sub set of the main line.  Or, Hasbro may have wanted to limit their gear to make them more attractive as pilots for the vehicles.  But, Dodger just has a single weapon.  (The microphone comes off, but not without some work.  It's fairly sturdy.)  The rifle is a science fiction themed photon launcher. It's fairly terrible.  But, the figure is so common with the weapon that it's hard to see Dodger with any other gun.  Sadly, Hasbro liked this weapon and it later appeared with both the mail away Create a Cobra and the Chinese Major Bludd.  The gun mold was also used in Brazil for various figures, including a black version offered with the Cobra Black Vulture (Abutre Negro) figure.

Battle Force 2000 represented a departure for the G.I. Joe line.  Originally, the figure line was conceived as a way to entice kids to buy the more expensive (and profitable!) vehicles.  Those vehicles, though, tended to include drivers as value added pack ins.  Battle Force 2000 was the first wave of Joes that were sold specifically to be the drivers of separately sold vehicles.  While driverless vehicles were sold with characters from the current year on the box art, the figures, the figures were never listed as specifically being the driver of a vehicle.  It was a logical extension of the original concept of vehicles.  And, had the Joe line gone this route through it's history, some of the great vehicle drivers would have been much more available.  But, how would our perceptions of vehicles changed had the drivers for them not been packed in with them and available through no other means?  The line starts to look very different.

Dodger was first released on single cards in late 1987.  In 1988, he was packaged with Knockdown in special 2 figure packs that were designed to sell the BattleForce 2000 concept.  In 1990, Hasbro repainted Dodger and released a new version in the Sonic Fighters line.  After that, the mold went to Brazil where Estrela released the mold as Kaptor.  This single carded figure was designed after the American figure, but features slightly different green and brown hues.  The mold then showed up in India where Funskool released it for many years.  The Funskool Dodger is based on the Sonic Fighters coloring scheme, but features the obligatory Funskool splash of unnecessarily bright blue and yellow.  But, this is an interesting take on the character.  The result is that collectors have 4 figures to track down, but they are based on the two color schemes.  The mold is likely still in India as Funskool last used it around 2010 and could reappear at some point in the future should the G.I. Joe concept once again become viable at Indian retail.

Dodger figures are cheap.  While you do see some sell in the $15 range, these are usually to impatient buyers.  Mint and complete figures can be easily had for $5, though the filecard will add a couple of bucks to the price.  Oddly, you can get carded European Dodger figures for around $22 and they seem readily available.  So, that's another route to take.  There is a persistence in the Joe dealer world that any figure with a removable microphone is rare to find complete.  Dodger's mic, though, was sturdily transfixed to his helmet and is not hard to find at all.  So, don't buy into the marketing hype.  As a cheap acquisition, Dodger is worthwhile.  He fits into the team outside of Battle Force 2000.  So, that gives him a purpose beyond his stated sub group.  He's a figure I enjoy, but not one that will ever gain any additional importance than what he has today. 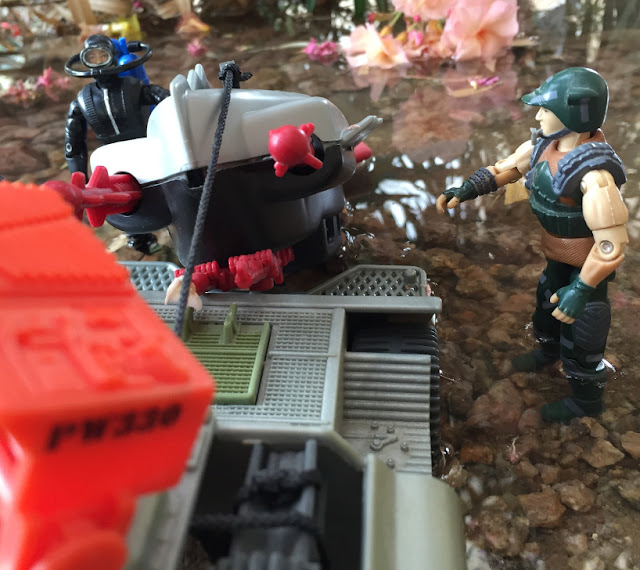 Posted by Robot_Sonic at 3:00 AM
Email ThisBlogThis!Share to TwitterShare to FacebookShare to Pinterest
Labels: 1987, Battle Force 2000, Dodger