Through the years, I have bought and sold a lot of G.I. Joe toys.  Not as a business, but as my ability to collect has ebbed and flowed with various stages of my life, I have upsized and downsized my collection accordingly.  Though these stages of sell or buy, I, inevitably, make a mistake or two.  In most cases, it's innocuous like buying a figure I already had.  In one, specific, instance, though, a haphazard decision to quickly clear a little bit of space left a void in my collection.  It was a great regret and it dated back to 2001.  The piece that caused this lament was the 1988 Mean Dog.  Now, I have one back in my collection.

1987 was the last year I collected Joes.  As the calendar turned to 1988, I was too old to buy toys anymore.  I picked up a few figures in the first months of the year, but was then done.  Without me leading the way, my younger brothers' interest in Joes also diminished.  My younger brother got one or two figures that year while my youngest brother probably got another 5 or 6 more.  While the figure acquisitions were sparse, the vehicle accumulation was even less so.  In all of 1988, my brothers got just a few vehicles: the AGP, the Swampmasher and the Desert Fox. I appreciated these toys immensely and thought they were better than many of the toys I still loved.  But, that wasn't enough to get me to go back and buy toys for me.  Through, first the catalogs that came with these two items and, as the year wore on, the comic books, I did manage to get a good idea of the toys that were part of the 1988 line.  I was enthralled by the new characters and vehicles and thought the toys must be cool.  But, I couldn't pry myself away from baseball card collecting to even entertain the thoughts of getting more toys.  So, the 1988 and later vehicles remained much of a mystery to me.

When I started buying up Joe toys as a adult in the late 1990's, my primary focus was figures.  I was living in an apartment in a new city and didn't have much storage space outside of a closet.  So, it was rare for me to get a vehicle unless it was a throw-in with a large lot of figures which I had purchased.  In 2000, I bought my first house.  With this newfound space, I had an entire room dedicated to my collection.  Shortly after moving in, I had one of those once in a lifetime deals fall into my lap.  I managed to acquire a mostly complete set of 1983 - 1985 figures and vehicles, all in exceptional condition for $40.  Even at the time, it was a ludicrous deal.  While that collection was heavily focused on '83 - '85, there were some outliers.  Mostly, they were figures.  But, there was a later vehicle included that I had never owned as a child, the Mean Dog.

Immediately, I was drawn to it.  At first, it was mostly curiosity.  Every single other vehicle in the lot (the Whale, Skystriker, Dragonfly, Rattler, HQ, Moray, APC, etc.) had been part of my childhood collection.  So, seeing something new to me made the Mean Dog more important an acquisition than those more iconic vehicles.  As I started looking at it, I was amazed at the details and play value inherent in it.  One my laments on classic Joe vehicles was that they, generally, carried few figures.  The VAMP is great.  But, it can only hold a driver and a passenger, with no place for much gear.  I had appreciated the Desert Fox since it held so many more figures and had space for spare packs and guns to be stored.  The Mean Dog excelled in this.

The Mean Dog is a modular vehicle.  Hasbro liked this design.  I think it made it easier to pack the vehicles into boxes.  But, it also tied Joe toys to the popular Transformers franchise as they could be taken apart and played with in different ways.  The Mean Dog contained a front mini tank.  The back gunner station and the removable massive cannon.  Together, these three parts made up an awesome design.  Individually, the parts still had value.  This added to the overall playability of the toy and made it something that I immediately found interesting.

I had never known that the front canopy opened and could hold a full crew of three figures.  Upon discovering this, the Mean Dog took on even more value.  It could hold these figures in a protected environment, while still leaving the driver available to man the gun station on the front part of the vehicle.  The back vehicle is less useful.  But, it does have a command station (which is a feature I've always liked) and can hold additional figures on the back.  The stand alone gun isn't that great when removed from the Mean Dog body.  But, it's massive and being able to take it out does give the body of the Mean Dog more versatility in terms of how anyone would want to use it.

The Mean Dog included the driver Wild Card.  The 1988 vehicle drivers are notoriously bad and Wild Card is no exception.  He features few paint applications, a terrible torso sculpt and a huge head.  He also, though, includes one of the cooler accessories in the line: a machete and sheath that is designed as a backpack.  It is great and makes Wild Card worth owning.  The figure, though, doesn't really match the Mean Dog.  There are many, better figures that mesh more cohesively with the vehicle.  So, I don't often match the driver and tank.  I find figure whose colors blend or complement the Mean Dog and outfit the crew with those figures in lieu of the intended driver.

The Mean Dog was released around the world.  The most famous release is the Funskool version: only because it was one of the excellent vehicles that were readily imported and sold for cheap prices by American dealers in the early 2000's.  However, exclusive colorings of the Mean Dog were also released in Europe and Brazil.  Each of the foreign releases are just variations of the brown color.  Put together, they add up to a cool little convoy.  But, at their core, they are just slight variations of the same theme.  So, if you are economizing space and don't collect shading variants, these are international releases you can skip.  It would have been great to get a green or black version of the Mean Dog as something different.  But, the brown color is very solid and works for most collecting needs.

Mean Dogs are not expensive. It is a very common vehicle with no easily lost or broken parts.  You can get a mint and complete version for around $15.  But, you'll pay another $10 or so to have it shipped to you.  As such, you'll see dealers selling the vehicle in the $30-$40 range.  As the vehicle can hold lots of figures for display and is in a solid color scheme, I'm surprised it isn't more popular among collectors.  But, the availability likely nosedives the demand.  It's still a great toy, though, and something that every collector should own.  Outfitted with some desert themed figures, the Mean Dog is a prime display piece.  I don't think I'd want to pay $50 for one.  But, the current market pricing is well under that and makes the Mean Dog a realistic acquisition for even the most frugally budgeted collector. 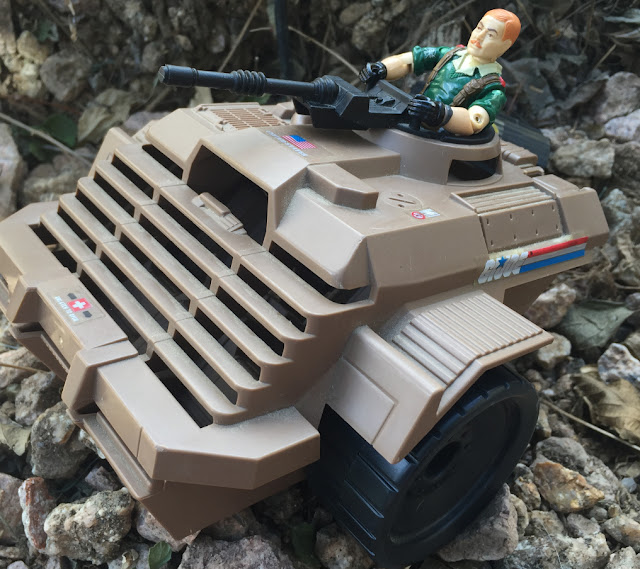 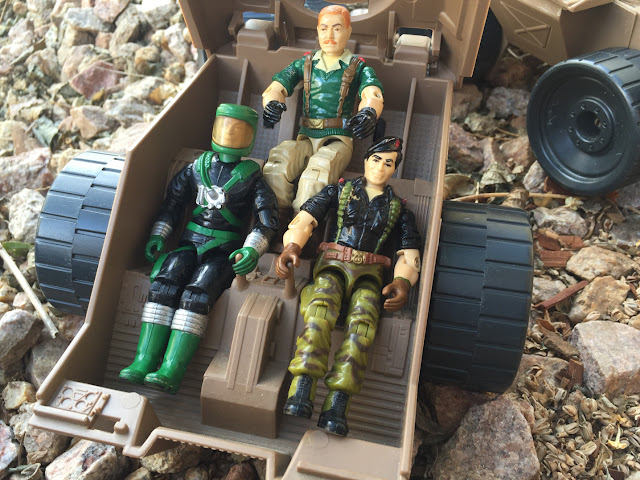 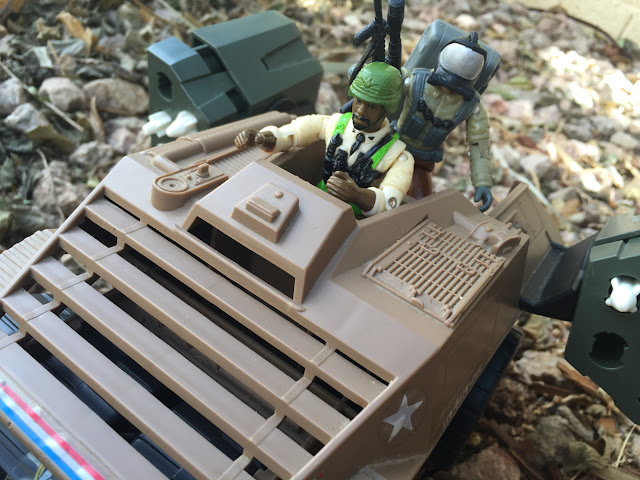 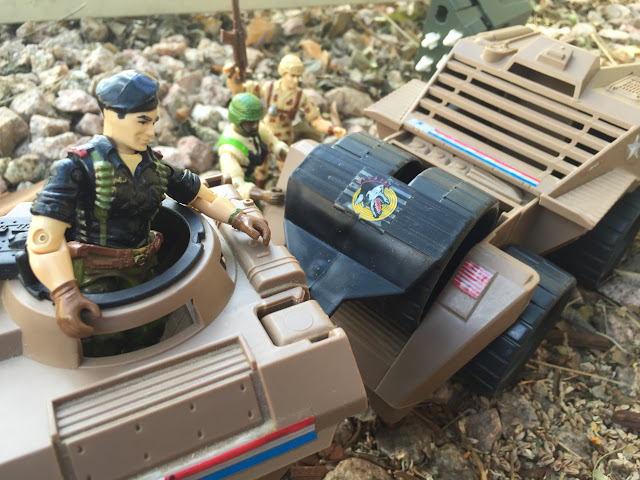 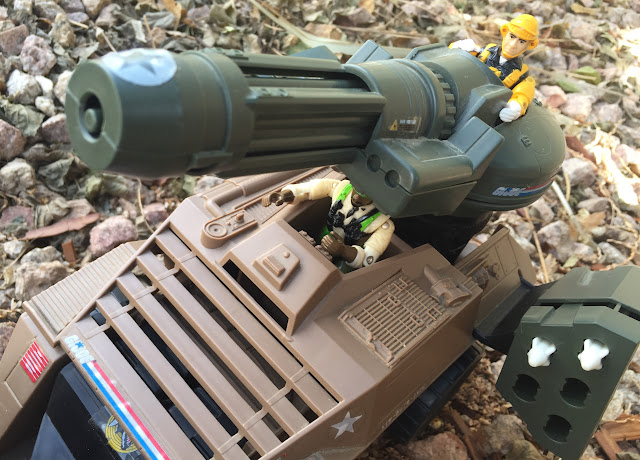 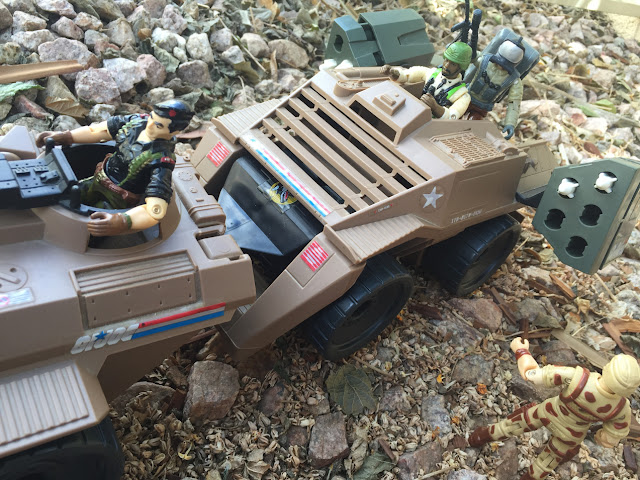 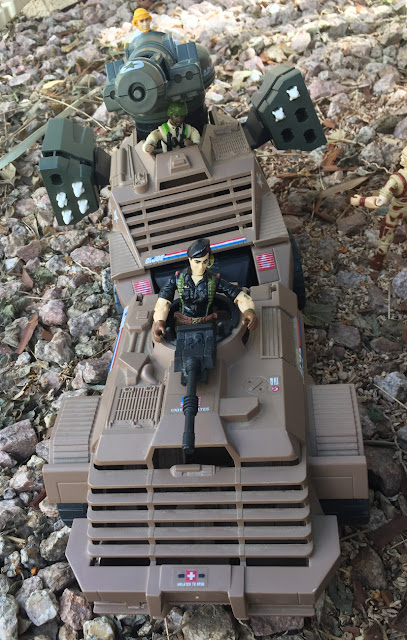 Posted by Robot_Sonic at 2:30 AM
Email ThisBlogThis!Share to TwitterShare to FacebookShare to Pinterest
Labels: 1988, Mean Dog, Vehicles