I did not buy G.I. Joe toys in 1989.  Even my youngest brother was pretty much out of them.  I had my ill-gotten 1989 Snake Eyes figure and he got a Scoop.  But, that was it.  I did, though, follow the comics and was at least keeping up with the toys that were released.  From the comic, I was aware of many new characters as well as spectacular new vehicles.  I wanted to buy them.  But, I was in high school and such a thing was simply not acceptable.  When I finally returned to Joe collecting, I discovered 1989 as one of the best years of Joe toys.  It was full of top notch figures, interesting characters, lots of army builders and spectacular accessories.  In their zeal to modernize the Joe team, though, the designers of the time offered a throwback as well.  Dogfight isn't a figure that's captured all that much attention.  But, his anachronistic appearance was something that deserves another look.

At his core, Dogfight is a guy wearing 1970's era headphones and a bomber jacket.  He's got an antique flight cap and the aviator glasses that hearken him back to the pilots of the heydays of aviation.  Practically, Dogfight is nothing more than a guy dressing up at an airshow.  Aesthetically, though, Dogfight is visually interesting and fits right in with some of the outfits chosen by Joes much more popular than he is.  (I'm looking at you, Shipwreck!)  His design shows some attention to detail and an eye towards historical homages.  He has character.  Which is something that's greatly appreciated on a figure that, on its surface, was a throw away inclusion in a low price point vehicle.

1989 was a year of character remakes.  Snake Eyes, Stalker, Rock and Roll and Deep Six all got new figures.  A few of the other retail figures from that year, though, appeared to have either been originally intended for existing characters.  Or, were heavily based upon them.  Backblast and Downtown are the two most obvious examples.  Both could have been named Zap and Short Fuse and no one would have batted an eye.  Dogfight is another.  This figure could easily have been Wild Bill.  The aviator glasses, bodacious mustache, orange hair and retro outfit all fit perfectly with the characterization of Wild Bill.  It had also been a while since Wild Bill had a figure and he retained a great deal of popularity in the comic.  It might be that Dogfight began his creative process as a Wild Bill update.  Or, the coincidence is just easy to spot after the designers had to come up with hundreds of unique character designs in the vintage days.  But, as Wild Bill, I think this figure would have been more interesting.

For me, Dogfight's primary value was his pistol.  In the early 1990's, his sighted weapon appeared in my collection.  One of my brother's friends likely left it at the house.  But, I was enthralled by the design.  The weapon made its way to the Track Viper that also appeared.  When I started collecting again and found the weapon was Dogfight's, I was somewhat disappointed.  But, it made the figure more relevant to me since I had the childhood connection to his accessory.  In early 2000, I wanted to get a Mudfighter and Dogfight figure.  It was just a lark, but one I quickly followed through on as they were available and cheap.  I found the Mudfighter to be a cheaper toy than I would have liked and it fell into obscurity.  Dogfight, though, was decent.  However, his resemblance to Wild Bill was too great to put him into the Dragonfly.  And, I had other figures to man the co-pilot chair on the Tomahawk.  So, despite his quality, Dogfight was forgotten, too.

But, every now and then, I find the figure and am reminded of his quality.  The brown jacket and white undershirt are a strong contrast that give Dogfight some visual appeal.  His blue pants are more Cobra than I'd like.  But, they work with the brown upper body quite well.  The head is very distinctive with lots of sharp paint applications.  He has molded flight wings and a radio transmitter molded to his chest.  He's something different is the battalion of Joe pilots.  He may not, practically, work in the Skystriker.  But, he does work in a lot of other aircraft, especially the helicopters.  His subdued color scheme just makes him a better fit for earlier Joes vehicles, as well.

Dogfight's mold was just used for this original figure before it sat fallow for 18 years.  In 2007, it made a surprise appearance on the Convention Steeler figure.  It was cool to see an unused mold at the time and the Steeler figure was excellently executed.  But, Dogfight's appearance was also bittersweet.  It showed that Hasbro had more molds available to them then they ever admitted to.  I would have loved to have seen the Dogfight head used in a wildly colored Dee Jay remake.  That would have been the type of figure that would have made the line fun.  But, those things never happened.  Still, it's tough to lament too much.  The mold is good, but not spectacular and the Dogfight character was never going to matter.  If this was supposed to be a new Wild Bill, I'd have enjoyed at least an attempt to remake him in that vein.  But, having just this one Dogfight isn't bad.

Mint and complete with filecard Dogfight figures tend to sell for slightly over $7.  For about double that price, you can get the figure along with his Mudfighter.  As it's not a bad vehicle, that may be more worthwhile.  As a figure alone, Dogfight is worth having just to fill out a pilot corps.  He looks good in the co-pilot seat of the Tomahawk and has value in that capacity.  The main thing is that he's distinctive.  Many of his contemporary vehicle drivers are lost in a sea of banality.  That can not be said of Dogfight.  He has a look you remember and a general appearance that lends itself to display.  There's great value in that.  So, Dogfight remains one of those figures that you own, appreciate and never, ever use due to his obscurity.  But, when you find a spot for him, you can start to realize that there's enough going on here to have hold a more prominent position that he might otherwise occupy. 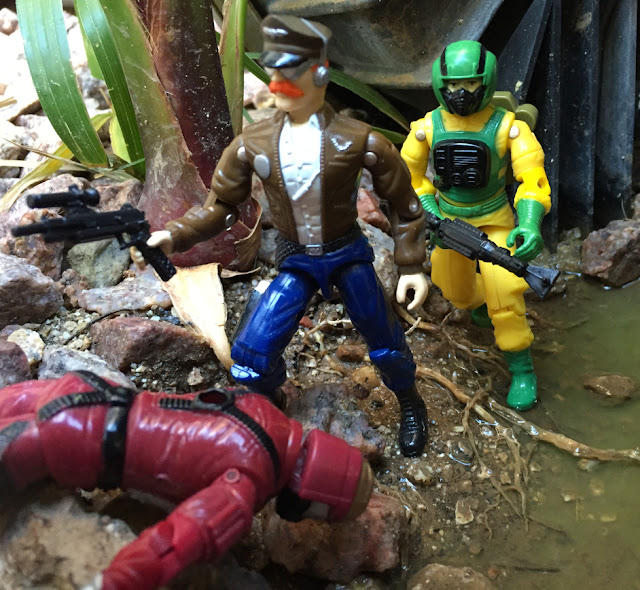 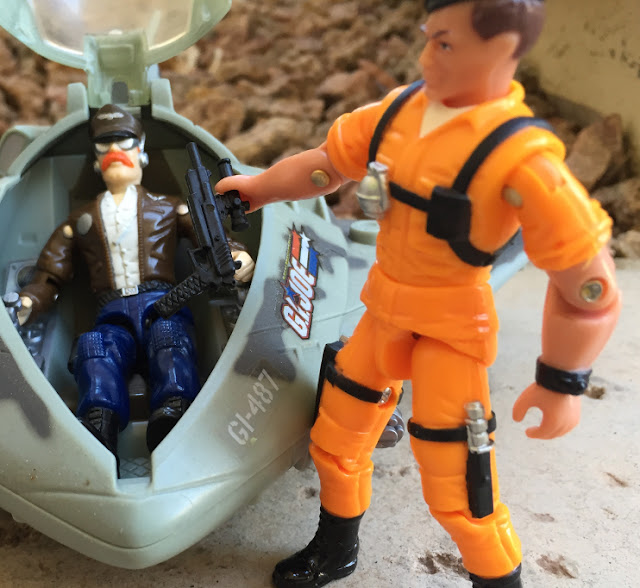 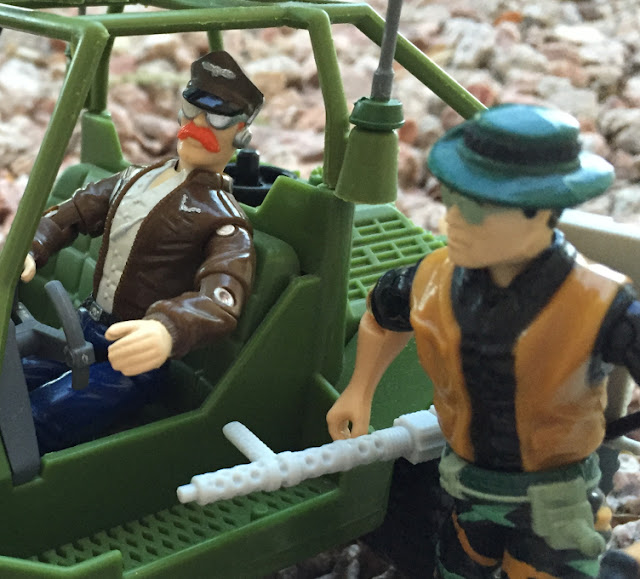 Posted by Robot_Sonic at 2:30 AM
Email ThisBlogThis!Share to TwitterShare to FacebookShare to Pinterest
Labels: 1989, Dogfight