In the mid 1990's, Joe was starting to disappear from retail.  Its space in the toy aisle was being pressured not only by shrinking toy departments in general, but also by the new, flashier and bulkier toy lines that were omnipresent at the time.  Joe was fading into obsolesce at the hands of a toy style that would prove to be less sustainable than the Joe designs from the 1980's.  But, if you were persistent, frequent and willing to tenaciously search the nether-reaches of stores at the time, you could still find some interesting stuff.  One of my finds was the Monster Blaster APC.

In the midwestern United States, there is a regional retailer named Meijer.  They were an early innovator in the concept of one store fits all.  They featured a full grocery on one side along with a full retail store on the other.  The upside was that any grocery run could also be a toy run.  The downside was that the massive warehouse space of the store made it such that combining these two errands meant a minimum of 15 minutes spent inside the store.  Meijer's sales model for toys was interesting.  While they stocked most of the currently in production toys of the day, they also carried overstock and surplus from the various toy manufactuers.  As such, in 1995, it was possible to go to a Meijer and find the currently shipping wave of Star Wars POTFII figures along with an old case of 1993 Battle Corps Joes.  It was though the model that I came across the Monster Blaster sitting on the bottom shelf of the action figure aisle.

When I first saw the Monster Blaster, I was not overly interested.  The name was off-putting and the box art really didn't do anything for me.  Plus, it did not include a figure, despite the relatively expensive price tag.  I had not bought any Joes in a while, though, and had some money in my wallet.  So, I decided to just go for it and acquire the vehicle.  I figured it would include a catalog that would help me place the release year and might offer some insight into other things to look for in my quest to snatch up the last remnants of the Joe line at retail.

When I got home and opened the Monster Blaster, though, I discovered a gem.  The vehicle was colored rationally enough that I could integrate it with my existing collection.  But, the real value was the size and play features.  The vehicle can hold a full 8 figures inside protective enclosures.  In addition, two other figures can man the rear gun mounts.  And, if you really want to weigh it down, 6 more figures can ride on the rails on the vehicle's side.  In short, the Monster Blaster held about my entire collection of figures at that point in time.

It was the type of vehicle I had always wanted.  As a kid, the APC had been a favorite of mine.  It could hold all the Joes I needed for a mission and their gear.  But, the cloth covering didn't offer a whole lot of protection for the group inside.  By the time the Warthog came out in 1988, I was done with Joe.  So, the Monster Blaster finally offered me the ability to move a bunch of figures around, while providing them the armaments and armor necessary.  It was about the only vehicle I had at the time so, it got a lot of use.  I even chose it over the Mauler in a late night spring loaded missile battle with a friend of mine in 1996.

The general design of the vehicle holds up well.  The main driver cockpit is roomy and detailed.  It holds the bulky 1994 figures with no issues.  (To this day, I prefer the 1994 Lifeline driving mine.)  The canopy provides cover, but allows some visibility of the figure.  The gunner station isn't as protected, but still works.  The large gun is not overly detailed.  But, figures fit on it well.  Any figure seated with the gun covering the opening is secure from oncoming fire.  The six passenger seats are large, too.  You can fit figures into the vehicle without too much crowding and still have room for a small complement of accessories.  The back gun stations are so large that their movement can be hindered by any figure in the mounts.  The guns show a science fiction bent and aren't as realistic as I'd like.  But, they are better detailed than many of the contemporary vehicles.

The best part of the Monster Blaster is the body detailing.  The main gunner station has a small ladder and the side passenger compartments have footholds to ease access to the high walled body.  The entire vehicle is encased with foot rails for figures.  They are separated enough from the vehicle body that fully loaded figures from the '90's (with spring loaded weapons and all!) can fit onto them without the awkward posing often required on some earlier releases.  There are various hand holds and armor points around the body as well.  It's about as realistic as you could expect from a rolling, armored cannon that's designed to fight genetically altered monsters.

The back roof has a catching mechanism that allows you to prop it open for display, play or elevated missile launches.  The roof fits tightly onto the chassis, though, and it a nice bit of engineering.  The spring loaded cannon is not overly obtrusive.  But, having the actual main cannon of the vehicle being tied to raising and lowering the roof (and exposing the troops inside!) is a bit off-putting.  The spare missiles that rest on the roof are well placed, though and do not detract from the overall appearance of the vehicle.

When I got the vehicle home and found how awesome it was, my thoughts on the Mega Marines in general began to soften.  My local Toys R Us had several each of the Mega Marines Gung Ho and Clutch hanging on the pegs.  I had not been driven to buy them, despite the black weapons, just due to the higher price point and really gaudy neon colors.  With this vehicle in tow, I decided it was time to break down and finally add them to my growing collection.  The next time I was at TRU, though, the figures had sold out.  After sitting unsold for months, they all sold out in just a couple of weeks once I decided I wanted them.  But, that was how it was back then.  At least I have them now.

The Monster Blaster was just released by Hasbro.  However, there is a European variant that has much deeper green lower half/interior.  It's an interesting piece that's not easy to find, but also not very expensive.  After those two vintage uses, the Monster Blaster APC mold disappeared until 2004.  At that time, Hasbro re-painted it, switched the vehicle's affiliation and released it as a Toys R Us exclusive BAT Transport.  This should have been a huge winner of a repaint.  But, the actuality was that the BAT Transport was a huge flop that hung around at retail for a very long time, even though it included 3 army building figures at a time when collectors could not help themselves buying every army builder that Hasbro released.  The BAT Transport, though, was released during an onslaught of new toys in the final few months of 2003 and first few months of 2004 and was caught up in the whirlwind that the retail Joe line became during that time.  It was a sad fate for a vehicle of this quality.  But, even I'm to blame.  While I did buy a BAT Transport when it was released, I sold it off rather quickly.  The recolor simply was too poor to justify and I found that having the repaint took away from the enjoyment I got from my original vehicle.  It's likely that, had Hasbro released the repainted Monster Blaster as a companion to the underrated Night Rhino vehicle that it might have generated more interest.

Monster Blasters are not popular.  Mint in the Box versions sell around $50 from time to time.  But, those prices are heavily dependent upon lack of competition.  Left to it's own device, a mint, complete Monster Blaster might sell between $10 and $15.  Of course, you'll pay that much or more in shipping.  So, the price can be a bit misleading.  Regardless, the vehicle is cheap to acquire and well worth the price.  It integrates well with the neon figures from the '90's as well as the more classically colored figures from previous years.  My nostalgic bent on the vehicle keeps it important to me.  But, an empirical review still allows the mold to hold up.  It's a toy that's worthy of any collection and is still available at a price point where even marginal interest makes the money worthwhile.  I'm glad I got this vehicle when I did.  I otherwise might have passed it by.  And, based on the quality, that would have been a shame. 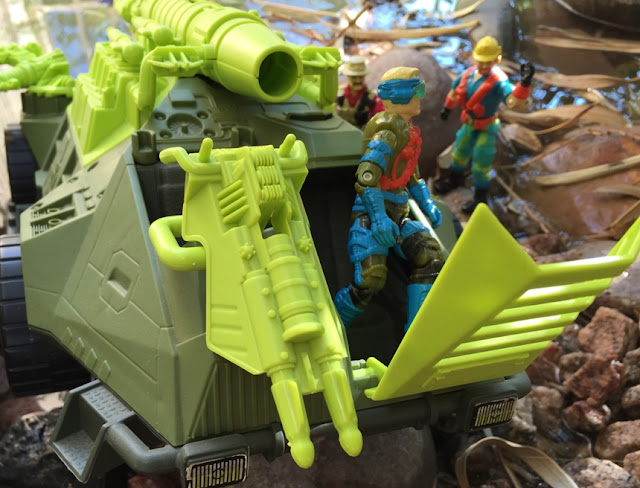 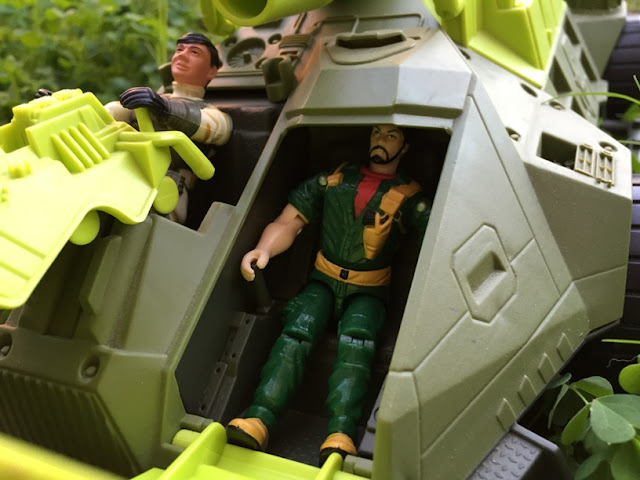 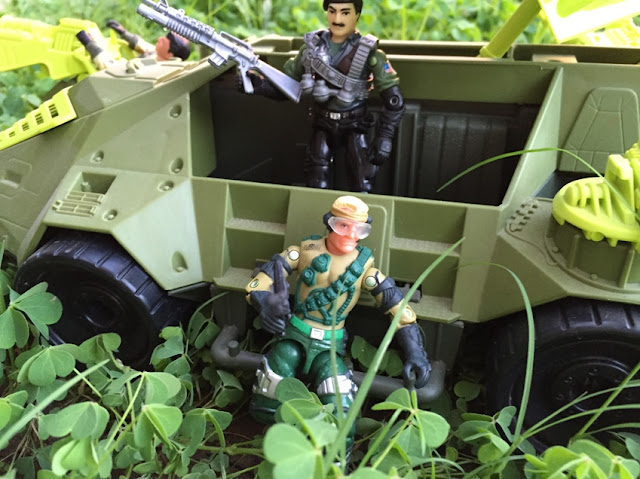 Posted by Robot_Sonic at 3:30 AM
Email ThisBlogThis!Share to TwitterShare to FacebookShare to Pinterest
Labels: 1993, Mega Marines, Monster Blaster APC, Vehicles