One rainy night after work, I saw the water collecting in the ditch behind my house.  I had a few spare minutes and had been sorting my Eels earlier in the week.  So, I quickly decided to get them out into the water.  The plan was for Big Brawler to be witnessing the scene.  This photo set was going to be for his profile.  But, I ultimately decided to not profile Big Brawler until the Funskool version was released: mainly due to the fact that the Big Brawler photos from this set didn't turn out.  The Eel photos did, though.

This was one of my most popular dioramas from the old site.  I used it in banner ads and the like back when such a thing was popular.  The photos seem quaint today.  But, for 2001, posting a bunch of Eels in action was something you didn't see every day. 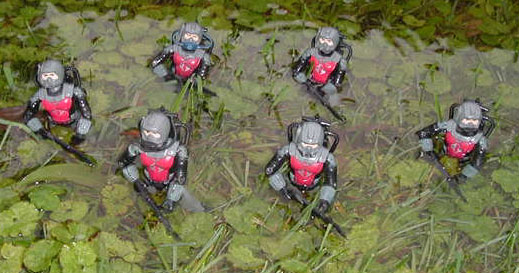 Posted by Robot_Sonic at 4:56 AM
Email ThisBlogThis!Share to TwitterShare to FacebookShare to Pinterest
Labels: 1985, Dio, Eel