I suppose something's not really a tradition if you've only done it one time in 17 years.  But, a Halloween Manimal profile is something that makes sense.  (And, JoeADay.com did it first this year.)    Slythor was my first back in 2013.  So, I'll showcase Warwolf now and you can expect Iguanus in 2019.  That will bookend nicely.

The Manimals are the most infamous legend in G.I. Joe lore.  In 1994, each figure in the Joe line was numbered.  The Manimals were numbered lower than the second series of Star Brigade figures that were released.  So, they were intended to make it to retail: which was reinforced by their appearance as coming soon on the back of the series 2 Star Brigade figure.  This is why so many loose and carded samples of the figures exist.  Hasbro had every intention of releasing them.  But, when it was time to start cancelling the line, the Manimals were the first to go.  (Many collectors were very unsure if the 2nd series Star Brigade would make it out to retail, too.  Hasbro was less than committal on what would and would not be released as the line died out.  For most collectors, finding the series 2 Star Brigade on retail shelves came as an immense surprise.)  It's possible that the higher price point of the Manimals in terms of production costs may have been the reason they got the ax while the Lunartix made it out.  In terms of concepts, the two aren't that far apart and the Manimals are more in line with other, more popular toy lines of the mid 1990's than the Lunartix are.

As a mold, Warwolf is, in my opinion, weaker than Slythor and Iguanus.  His "transformation" is somewhat boring and the wolf head doesn't really pop like Slythor's snake head.  The teeth are well detailed, though.  The selling feature, though, is that Warwolf has an articulated tongue.  While the usage of this is probably nil, it is a neat little feature that shows the care applied to the Manimal design.  Outside of this, though, there's not much to be impressed with.  The figure has no o-ring and, instead, features the slide joint legs that were starting to appear in the mid 1990's.  The hands just have holes poked through them for the Kenner POTF era pre-cursor rifles to fit into.  The artwork shows eyes painted onto the side of Warwolf's head.  Those eyes do not exist on the figure itself.  It's a wasted paint application.  But, had the eyes been painted on, they would not have likely looked good.

The planned deco for the 1994 Warwolf is vastly different than what we saw in 2001.  The retail figure features a human flesh colored head.  It's likely meant to be a "disguise" for Warwolf to blend with humanity.  The 1994 figure, though, was completely different.  The head was a much darker color and he had red eyes.  The appearance was much more alien and worked to a far greater level than the flesh colored figure we saw in 2001.  Instead of the production green and blue body, the original used light purple and maroon as the color base.  In general, the 1994 was a far better figure.  But, better is relative.  The coloring would have been an upgrade over what was released.  But, the different construction and general theme remained the same.

Manimals were an utter retail disaster.  At $10 per figure, they were almost double the cost of a retail 2 pack from the ARAHC at Wal Mart.  They clogged the pegs at KB Toy Stores around the country for several years.  KB immediately cancelled the 2nd series of figures due to poor sales of the first wave.  KB also refused to clearance them and it was only through sheer attrition that they finally disappeared from retail.  In the following years, aftermarket pricing was so low that few sets would go up for sale.  Usually, the price for a set was below retail.  A decade a half after their release, though, pricing has started to rise.  Carded, the figure sells between $20 and $30.  (The other two Manimals seem to be similarly priced.)  Loose, mint and complete figures are not commonly found.  But, those sell in the $15 to $20 range.  Though, this price is likely predicated on the lack of options and if you have multi year patience, you might get them for less.  As a $20 figure, Warwolf doesn't hold up.  As a $10 figure at retail in 2001, Warwolf didn't hold up, either.  If you're a glutton for the horror that could have befallen the Joe line, this figure is worthwhile.  But, even a Star Brigade aficionado like me has little interest in the figures.  As a window into history, they have value.  But, it's tough to put that value into action.

Personally, I am ambivalent towards the Manimals.  They are decent enough toys.  They are G.I. Joe.  But, they are just so odd and differently designed that they don't feel like they belong with vintage G.I. Joe figures.  Mine sat unopened for years.  I finally opened them up and dropped them into bags in order to save some space.  They have sat in those bags for over a decade.  Slythor came out one time in 2013 for a profile.  Warwolf has come out just this one time for this profile.  And Iguanus has never come out of the bag.  It's possible that, someday, they could make their way to a Star Brigade display.  But, even then, I don't see them being anywhere but in the back of the display, out of sight and out of mind.  Most other collectors have similar feelings and you rarely see these guys displayed any way other than MOC.  They're just too bizarre to ever be relevant to the majority of Joe collectors. 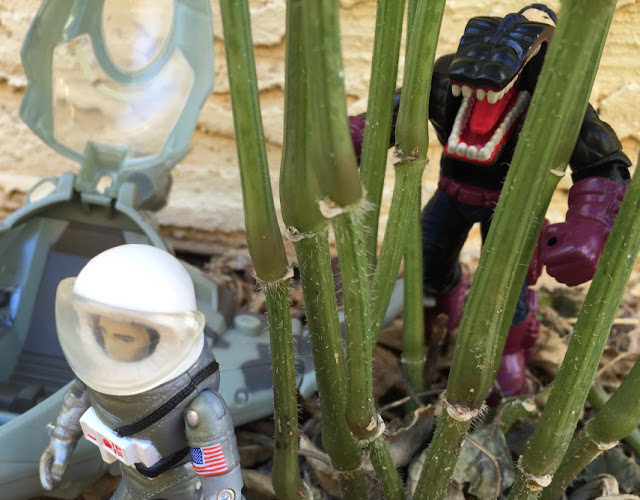 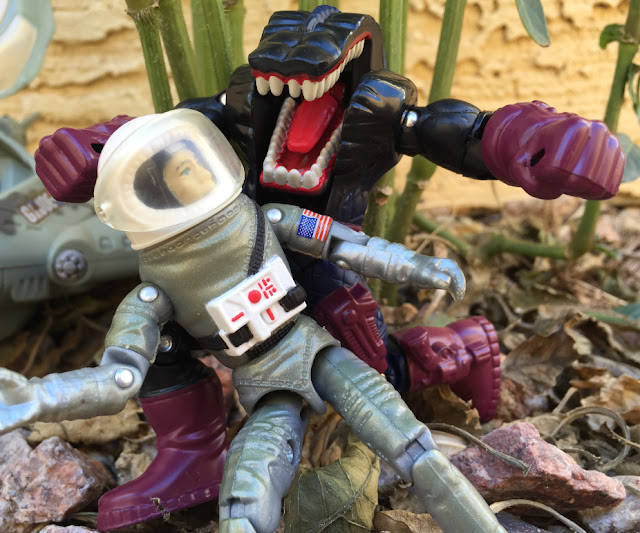 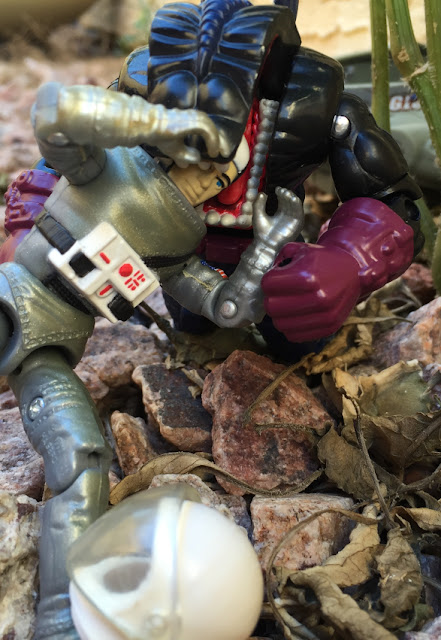 Posted by Robot_Sonic at 3:29 AM
Email ThisBlogThis!Share to TwitterShare to FacebookShare to Pinterest
Labels: 2001, Manimal, Retailer Exclusive, Warwolf