In 2002, Convention go-ers were surprised when they picked up their 15 figure Crimson army building sets.  Along with the announced Vipers, twins and Baroness figures, Master Collector snuck in a special release.  A repainted Dusty figure was showcased as the first parachute drop figure.  This parachute figure would become a convention tradition and every set going forward would feature a special parachute figure as a bonus for each 15 figure set.  Some have been great.  (See the Air Viper.)  Others have been really bad.  Most, though, follow along with the general convention figures where they are neat, but not spectacular.  In 2010, the final vintage style parachute figure was released: Flint.

I like orange figures.  I have since I first saw a photo of the 1994 Star Brigade Roadblock.  I am distinctly in the minority on this opinion, though.  Orange is not a popular color among Joe collectors outside of maybe BBQ or Wet Suit.  In general, it is loathed.  The Club's decision to produce an all orange Flint was both odd and interesting.  But, collectors quickly seized on the color and disparaged the figure from the start.  To be fair, the criticism is warranted.  While the orange is bright, eye catching and unique, it also makes for a figure that's tough to use in any capacity.

It was made apparent in 2010 that the convention exclusives would be the swan song for vintage style Joes.  Personally, I hoped for a tremendous send off that would be fitting of the line's legacy.  The first figure to leak out, though, was the terrible Red Shadow Torch figure.  Immediately, that raised flags that the set might not be great.  Slowly, the other figures were revealed.  The Interrogator and the Black Major were typical convention figures: not bad, but not great, either.  They just sort of exist.  The Red Shadow figures, though, made up for it all.  They were, generally, perfect for what collectors wanted.  (And, aftermarket pricing continues to prove that.)  The figure to which I was most looking forward, though, was Flint.

The minute I heard Flint was the set, I had dreams of a V1, Action Force green Flint figure.  Flint was a major player in the Action Force comic and getting his classic look in the iconic European green would have created a figure that I would have army built.  This, though, was not be be.  When the first Flint was revealed, it was a a redone V1 head on a 1993 Duke body.  My first reaction was terrible disappointment.  There was simply no way that any figure other than the V1 Flint mold was going to hold my attention.  To me, the mix of a classic 1985 head and a 1993 body didn't seem very congruent.  And, in many of the photos of the figure, the construction looked awkward.  So, my interest in Flint was diminished and I put the figure out of my mind.

When the convention occurred, though, the images of this parachute drop figure surfaced.  Again, the construction looked a bit odd, but the figure was bright orange!  To some, this was a detriment.  To me, it make the figure interesting.  We hadn't seen an orange bodied figure outside of Tiger Force: and even that had been six years prior.  This oddity was exactly the type of figure I tend to enjoy.  And, he was of my favorite character to boot.

In hand, the figure is less awkward than he often looked.  The Flint head on the Duke body is an imperfect fit.  And, the figure has brown hair instead of black.  That seems like a fairly lazy mistake.  But, the overall package isn't bad.  The bright orange makes for something visually interesting.  Since we have the mold combination in more militaristic green, too, the figure doesn't seem like such a waste of  a figure slot.  Many saw the figure as a prisoner.  But, the silver grenade and leg pistol kind of make that an implausible use.  What's left, though, is a solid Flint figure for a base or co-pilot position.  It's not the most glamorous role.  But, it allows for some usage of the Flint character without taking up one of his higher quality releases.

As a figure, this Flint is OK.  The paint masks are sharp and crisp.  But, they are also sparse.  You have the black highlights, the silver metal implements, a white undershirt and a splash of red on the figure's beret.  Collectors tend to expect more from convention releases in terms of paint masks.  But, this is a case where less i more.  The green, regular set Flint is a mish-mash of cammo with a green base and black splotches all over him.  It's a busy disaster that takes away from the potential of the mold.  (It may also be a subtle homage to a planned 1995 repaint of the Duke figure that was supposed to be in green cammo.)  This orange version is cleaner and showcases the general character without burying him in unnecessary colors.

Accessory wise, this Flint isn't great.  But, mostly, parachute drop figures have only included a parachute pack (usually a recolored Jinx backpack) and a parachute.  And, that's exactly what was included with Flint.  The strings from the silver parachute can be tied to the sword holders on the Jinx pack to simulate an open parachute.  It works for what it is.  In a perfect world, it would have been cooler to get a Parachute Pack complete with air mask for the figures.  But, that's the type of pipe dream that was squashed in the early 2000's when it came to repainted vintage Joes.  It's easy enough to arm this figure from the multitude of extra weapons included with the figures from 2002 and forward.

I can not get enough Flint figures.  Hasbro could have repainted all of his molds multiple times and I would have bought them all, unless they included that terrible head from the Comic Pack version.  I feel the V1 Flint figure has at least 4 solid repaints left in it.  The Eco Warrior version could have been done in this color scheme and I'd have several.  The 1994 Flint got a solid repaint in 2001, but could have come back at least once more.  Frankly, it would have been cool to just get a full Duke repaint for this figure by foregoing the Flint head.  That would have been another character and given this underappreciated Duke mold one final use.  But, the Flint is a nice treat.  You'll likely see him manning my HQ for years to come as the color lends itself to that setting.  The mold and colors blend nicely with other 1993 and 1994 figures.  So, this is a good way to bring the classic Flint head into a group shot of these later molds.  Beyond that, though, the figure's use is limited beyond the visual feast of an orange clad Joe.

The orange Flint figures have somewhat disappeared and you don't see them like you used to.  But, that doesn't mean they are overly pricey.  You can get MIB figures in the $30 range.  If you can find figures sold at open auction, you can get them much cheaper than that.  But, you'll wait for a while before you find one.  Being bright orange is going to be a detriment to the figure's popularity and will always make him less desirable than the green version.  But, there are not a lot of new collectors joining the ranks of those of us who focus on vintage style Joes.  Figures with late release dates, like this one, are already heavily concentrated in the collector base.  As such there is simply no demand for many figures like this one.  The general rarity helps to keep the prices somewhat higher.  But, we've seen that modern remakes of vintage Joe molds don't see the upward pricing trends that are more common on different sculpting styles from the same era.  The downside is that figures like this are harder to find.  But, when you do, you can get them cheap. 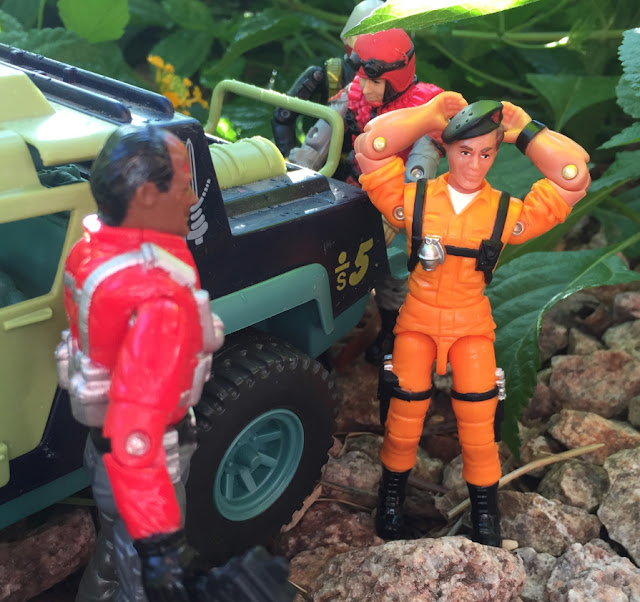 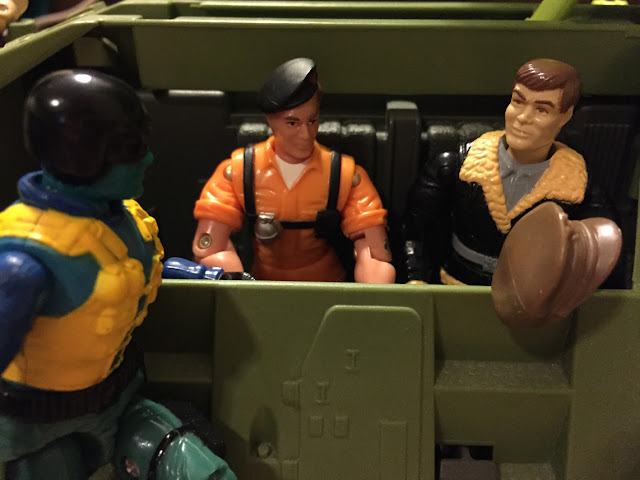 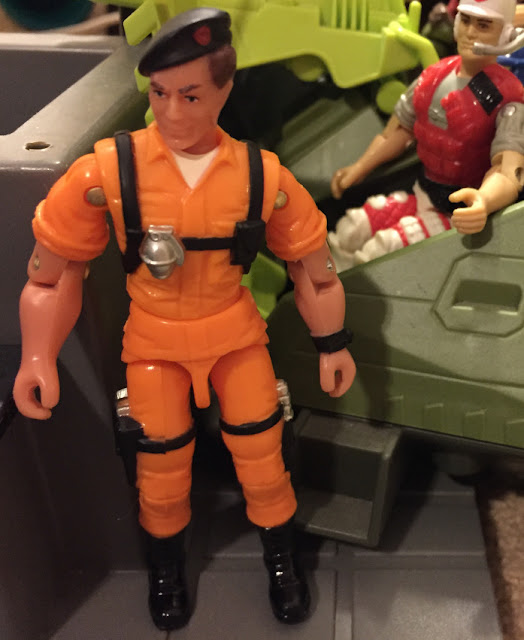 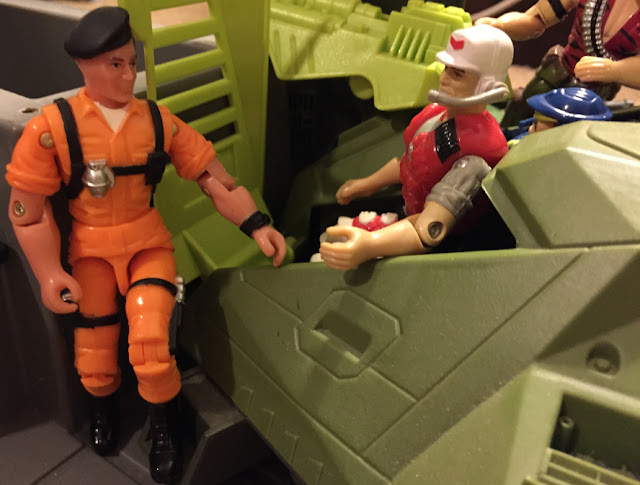 Posted by Robot_Sonic at 2:06 AM
Email ThisBlogThis!Share to TwitterShare to FacebookShare to Pinterest
Labels: 2010, Convention Exclusive, Flint