Mutt - Where In The World

The Mutt mold's history is extremely interesting to me.  First, it's one of my favorite vintage molds.  I like both the character and the figure.  Secondly, Mutt had a major alteration done to his mold in Brazil that allows us to confirm that the same mold moved around quite a bit and there were not multiple instances of the mold.  As a figure, Mutt was produced by Hasbro, Estrela, Auriken and then Hasbro again.  In 2004, Hasbro resculpted Mutt for a retail release.  But, this just adds complication to the story.  So, we'll start at the beginning.

In 1984, Hasbro released the Mutt figure.  He was part of the first lineup that really benefited from the line's success.  The 1984 series showcased more in depth sculpting, especially on the figures' heads.  The real hallmark, though, was the bounty of accessories that the 1984 series offered.  Mutt was one of the greats: featuring a silenced pistol, nightstick, helmet, face muzzle, a dog leash and his signature, the dog Junkyard.

The character was featured in both the cartoon and the comic.  While Mutt never achieved major character status, he was a secondary player who was able to garner a bit of popularity.  Among my peers, Mutt was well liked, mostly due to the inclusion of his dog, Junkyard.  That feature upped his popularity, even if he didn't have as much media exposure as Duke or Roadblock.

After Mutt was discontinued at retail in 1985, the mold was sent to Brazil.  This is where Mutt's history gets a little odd.  Estrela toys released the figure as Mastim around 1986 or so.  However, they modified the mold.  For some reason, they removed the insignia on Mutt's chest.  This seems a random and unnecessary change.  The insignia was part of the chest mold and didn't have any paint masks.  Ostensibly, there was no reason to remove it.  Anecdotally, I've hear from a Brazilian collector that the patch was somewhat reminiscent of symbols worn by Brazil's dictatorship government and it may have been removed to avoid any associated with them.  It makes for an interesting story.  But, one that's completely impossible to verify and should be taken for what it is: speculation.  Aside from the patch, Mutt's colors are generally darker than the American figure's and he has a darker skin tone.  The figure also features an accessory change as he now includes a black 1982 style helmet rather than the American helmet with the molded goggles.

After Estrela released the mold, Mutt surfaced for a brief time in Mexico where Auriken released the figure using the Estrela mold.  (Estrela licensed the molds they had to Auriken which is why the Mexican figures so resemble the Brazilian lineup in terms of characters.)  The Mexican figures didn't deviate too much from their American designs.  Mutt has some slight color differences, but we'll look at those more later.

In 1989, Estrela released the Mutt mold again.  This time, the figure was repainted and was released in the United States.  This new Mutt was known to American collectors as the Slaughter's Marauders Mutt.

Around 1991, Hasbro got the Mutt mold back from Estrela.  It appears that they reclaimed several molds at the time.  It's not really apparent as to why.  However, it may be that there was a mold exchange and Hasbro sent large volumes of newer molds to Estrela in exchange for getting older ones back.  We don't really know the details of Hasbro's international mold sharing agreements and they are one of the few remaining, truly unexplored facets of the vintage Joe line.

With the Mutt mold in hand, Hasbro produced an exclusive version that was only released in Europe.  This Irish character was not Stanley Perlmutter, but an Scotsman named Andrew Macenzie and featured a flock of orange hair.  It's noteworthy that the gun, Junkyard and nightstick released with this figure are actually dark grey.  It's hard to note the differences in photos and, can even be tricky in hand.  But, there is a difference in color to the Euro exclusive gear.  Also of note, Mutt's original helmet returned with the European release without explanation as to its absence.

Below, you can see a visual comparison of all the worldwide Mutt releases.  (You can click on the image for larger versions that better show the detail.)

The top row are the three Mutt releases based on the American color scheme.  The first is the Hasbro Mutt released in the US and Europe.  The second figure is the Brazilian Mastim figure.  You can see the vastly different skin tone.  Aside from this, the patch is removed.  The general color scheme features a brighter green body and darker brown vest.  The third figure is the Mexican release by the Auriken toy company.  The skin tone is pastier and the green body is darker, but the brown vest is brighter.  You will notice the patch is missing here, too.

Note the similarity in blue color between the Slaughter's Marauders figure and the European exclusive figure.  This may be just coincidence.  But, the Euro figure features an exclusive paint mask on the figure's chest knife, too.  The paint masks were similar to the vintage figure rather than similar to the Marauders figure.  This is also odd.  In 2003, Hasbro planned a series of Wal Mart exclusive figures.  Among them was the V1 Low Light.  That figure featured the same paint masks as the Slaughter's Marauders figure from 1989.  It's possible that this was just a function of the fact that the Marauders Low Light also has a European exclusive release.  But, it appears that paint masks may have become available and then unavailable at various points in the lives of molds.

Interestingly, in 1990, Spirit and Mutt were paired together by Larry Hama for a story line beginning in issue #100 of the Marvel comics series.  It was an odd pairing at the time as the characters had never really interacted much.  It might have been a way for Hasbro to get the characters into some media after their 1989 Slaughter's Marauders release.  But, then, you would have expected some of the other members to reappear, too.  Or, at least for the characters to appear in their Marauders uniforms.  It may have been that Hasbro planned for the two exclusive repaints of these characters to have a worldwide release.  But, they couldn't find a slot for them in the American line and they became European exclusives instead.

In 2004, Hasbro decided that Mutt would make a return to retail.  However, instead of finding the old mold, Hasbro resculpted the character's head and chest.  On this resculpt, the chest insignia returns.  The mold was just used one time for the Anti Venom Mutt.  But, there are also two unreleased variants of the figure.

Hasbro's decision to recast the mold is odd in light of the fact that the Low Light mold was in Hasbro's possession.  Of the Slaughter's Marauders molds, BBQ and Sgt. Slaughter ended up in India.  Footloose has never appeared again.  Three figures, Spirit, Mutt and Low Light, though, were released in Europe.  Hasbro still had the Low Light mold.  It would stand to reason that they still had Mutt and Spirit, too.  So, why did they recast?  Maybe it was cheaper than searching for the original mold.  Maybe the original wasn't usable, but was useful enough to get a cheap recast.  Maybe Hasbro was just lazy.  Collectors would have loved a re-release of both Spirit and Mutt in the 2000's.  Both figures were popular and people would have bought them, especially with their original gear.

Junkyard also has variants unique to the various figure releases.  The 1984 Hasbro Junkyard features a brown belly paint mask that you can see below.  Both the Brazilian and Mexican Junkyards also have this paint mask.  The brown paint was removed for the 1989 Slaughter's Marauders release.  The European, grey, Junkyard also has no paint masks.  For the three that do have paint mask, telling them apart is very difficult.  The Mexican version appears to have a bit of  a shine to it.  But, that's a small sample size and could just be wear.  As the three Junkyards were made in different places, they should be different.  But, telling them apart is very difficult. 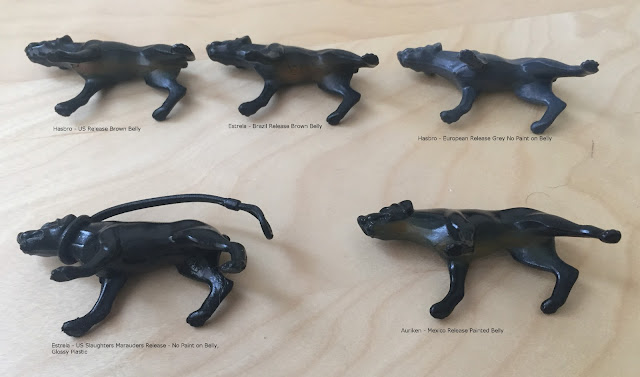 The rest of Mutt's gear also has slight differences.  The Estrela and Auriken versions included a black 1982 helmet instead of Mutt's standard head gear.  The 1989 Slaughter's Marauders version also included this helmet.  The European Mutt brought the helmet back, though.  Mutt's muzzle has some differences, too.  The Estrela version I have is a more rigid plastic.  Again, though, small sample sizes may be at play.  The 1989 mask, though, is a much softer plastic.  I have found that this version tends to feel oily to the touch as the plastic isn't holding up as well as collectors would like.  Mutt's leash, Mac-11 and nightstick are tough to tell apart.  There are slight differences in the plastic composition.  But, they are tough to discern on such small pieces.  The biggest difference in the European Mutt that includes very dark grey versions of the helmet, gun and nightstick.  Again, the differences are difficult to see.  In hand, the comparison is easier to spot.  But, on a cursory glance, it's easy to confuse American Mutt accessories with the European gear and many "complete" European figures actually include American guns or nightsticks.

You can see some of the accessory differences in the photos below.


Mutt has 5 versions of the original figure for collectors to track down.  Three of them, though, are based on the American version.  There are three versions of the resculpted Mutt, too.  So, there's a lot out there for the Mutt collector.  But, there was a lot that could have been done with the mold.  If Hasbro had it, along with his original gear, he would have been great in Night Force, Tiger Force or even in an arctic theme.  But, that never happened.  So, we have what we have.  The Auriken and Estrela Mutt figures are not overly common.  But, they are not rare, either.  Finding them mint and complete can be a challenge, though.  The Euro Mutt is also tough to find.  But, again, he's not impossible.  And, prices on the Euro figures have fallen in the past 5 years or so.

The main Mutt mystery is why Estrela removed the chest patch.  But, the greater question is the ultimate Fate of Mutt.  Did he get shuffled off to India and is still rotting in a Funskool warehouse?  Or, did Hasbro have him and just fail to either realize that collectors would welcome him or understand that they had the mold at all?  Regardless, collectors got a decent run of Mutt figures from around the world.  There isn't a great deal of diversity in them, but he got more releases than many other figures.  An important part of my enjoyment of the Joe line comes from the international takes on the classic figures from my youth.  I get a chance to enjoy the figures again and get something a little different in my collection.  Hopefully, this piece gives collectors more information so they can make the best decisions for them when diving into foreign Joe collecting.
Posted by Robot_Sonic at 3:32 AM
Email ThisBlogThis!Share to TwitterShare to FacebookShare to Pinterest
Labels: 1984, 1989, Brazil, European Exclusive, Features, Foreign Figures, Mastim, Mexican, Mutt, Slaughter's Marauders, Where in the World