The Joe line has many icons. They are images of characters or vehicles that simply transcend the line and all subsequent versions of specific items must be derivative of those original incarnations. Items like the VAMP, Skystriker or even Snake Eyes wearing black are ingrained notions of the line that can not deviate too far from their original design. One such icon for Cobra is the classic Hiss Tank from 1983. Sleek, simple and, yet, so well done, the Hiss Tank personifies Cobra's military might. All subsequent takes on the Hiss have had to live up to the lofty standard of the original.

In August of 1983, my brother's best friend who lived around the block from us had a birthday. For this birthday, he received most of the 1983 Joe line. Aside from the awesome Joe figures from that year, he got the full gamut of Cobras. Destro, Major Bludd and the FANG were great starters, but he also got the first Hiss Tank I had seen. The tank was perfect for kids of the day. It held 4 figures, could move fast and was armed to the teeth. It was the ideal weapon for Cobra and was something for which the Joes had no real answer since there was only one MOBAT in the neighborhood and no one ever wanted to play with it.  A few weeks later, I recall zooming his Hiss down the sidewalk as we waited for the first G.I. Joe cartoon to air.  That's one of the driving forces behind the early memories of the tank.  Oddly, I recall the Hiss Tank and the adventure outside leading up to the cartoon moreso than I remember the cartoon itself.  That Christmas, my brothers and I got most of the rest of the G.I. Joe line, too.  While we shared the HQ and my younger brother got the Battle Bear, I got an APC and the Hiss Tank.  Immediately, the Hiss was opened and my Cobra forces now stood on far more equal ground with the Joes.

The greatness of early Cobra was the uniformity.  The Cobra Trooper and Officer were blue.  (Along with the Viper Glider and Viper Pilot.)  Cobra Commander was a lighter shade of blue.  Destro was black with red highlights.  Major Bludd was black with brown.  The Hiss Driver was red.  The FANG and the Hiss tank were red and black and black, respectively.  Sure, you had the white SNAKE armor.  But, even that was standardized as a Cobra color in 1984 with advent of the CLAW.  Cobra moved away from some of the standardization as the line progressed.  But, that early core cemented the idea of Cobra to me.  They were the blue and black brigade: fearsome terrorists (usually heavily Russian in the early '80's) who were willing and able to destroy the American way of life.  The Hiss Tank gave them power.  No longer were they some guys with Warsaw Pact small arms trying to infiltrate a town.  Now, they could roll their armor against any American city and impose their will while the populace waited for the military to arrive and turn their town into a ravaged war zone.

My favorite quality of the Hiss Tank is the durability.  The Hiss is sturdy.  As such, my original Hiss survived in pretty good shape while most of the vehicles which we acquired at the same time suffered damage and wear.  With few moving parts and a generally strong design, the Hiss withstood the constant play a 10 year old could put on his favorite toy.  That strength, though, is also a likely reason why vintage Hiss Tanks are cheap today.  On the surface, it is the most popular Cobra vehicle and is army built heavily.  Yet, they remain relatively cheap.  The surface reason is that Hasbro sold a LOT of Hiss Tanks in the early 1980's and then the tank had a very long life as a mail away as well.  However, I think the fact that good conditioned Hisses were common survivors of childhood collections meant that fewer found the trash can back in their release window.  Broken toys were thrown away in my home and many of friends faced the same policies.  If the Hiss didn't break, it was more likely to survive and be available for the adult market.

In my childhood collection, I had three Hiss Tanks: two black versions and the Sears SMS.  This convoy formed the backbone of my Cobra army for years and years.  For a time, the Hisses were replaced by STUNs.  But, I was always brought back to the Hiss because I had so few Cobra vehicles in general.  But, as a vehicle, the Hiss was pretty much perfect.  The cannons were large enough to plausibly destroy smaller Joe vehicles and do damage to the perimeter defenses around Joe bases.  But, they were also small enough to be used for anti-infantry purposes.  They could elevate to shoot down aircraft and the gunner was, relatively, protected for a Cobra vehicle.  The Driver was exposed.  But, the sloping bulletproof canopy was uses as a shield that could deflect most small arms fire away from the cockpit.  The Hiss was large enough to hold four figures (though, at some point, almost every Hiss that saw extensive play suffered a broken foot peg on the rear figure stand) while small enough to be easy to transport and play with.  Like the VAMP, the Hiss was pretty much an ideal toy for kids of the day.

The detail on the tank, though, is what elevates even beyond the basic construction quality.  While the pins that hold the guns into position are often broken, the rest of the tank had little in the way of moving parts.  While it would have been cool to have moving treads, the wheels hidden beneath the tank worked perfectly well and left the rolling tracks to be part of your imagination.  The cockpit is well detailed with controls and buttons that make it appear high tech.  The sides of tank features molded rivet marks to show where the steel is fastened together.  It's a cool little detail that brings more depth to the tank's appearance (which is important due to the overall black color) and adds an element of design that was missing on most, cheaper toys of the day.  Two figures could ride on the back of the tank.  The platform is large enough to be useful and pose figures less awkwardly than most of the later vehicles which incorporated the same feature.  The gun turret is nicely detailed and there is a sticker to show the gun controls.  The canopy fits tightly over the cockpit and is easily held in place.  The entire package is a marvel of toy engineering and holds up remarkably well more than 30 years later.

The Hiss Tank was a staple of international release.  Hasbro repainted the Hiss for the Sears exclusive SMS in 1985.  But, the tank was also released in Brazil, Argentina, Europe and Japan.  Palitoy released an exclusive coloring of the mold called the Hyena and released it with Red Jackal.  In 1991, the canopy was retooled for the Septic Tank.  Hasbro retained the mold in modern times and released a Toys R Us exclusive version in early 2001, a convention exclusive tank in 2002 and then a KB exclusive crimson version in late 2004.  Oddly, though, Hasbro would not revisit the mold again.  In the modern line, remakes of the Hiss have been rather ubiquitous, but they have gotten some really nice repaints that are sadly missing from the vintage line.  Hiss collectors will keep themselves occupied for a long time tracking down all the international and packaging variants.  (There are sticker variants as well between the retail release and mail away versions.)  But, the general look of the Hiss was kept consistent and there are really only three materially different color schemes: black, red and the 2001 purplish-blue.

Hiss Tanks are not expensive.  Nicely conditioned tanks, with the blueprints run under $25.  Just the tank alone runs between $15 and $20, usually depending on the condition of the gun mounts or stickers.  For a vehicle that is as popular as it is and as important as it is to the Cobra army, that is a pittance and there's no reason why any army building collector doesn't have a convoy of Hiss Tanks to transport his troops.  But, collectors are fortunate that such an iconic and important piece of Cobra equipment is also so ubiquitous.  There's no excuse for anyone to not have a Hiss convoy as large as they want except for sheer indifference to the toy's availability.  If only we'd gotten a couple of more repaints in the 2000's.  But, when the original is as perfect as the Hiss, it's hard to not just be grateful for what it is.  33 years later, this vehicle still remains the backbone of my Cobra vehicle motor pool.  I'm not alone in that which is a testament to the incredible quality of this toy. 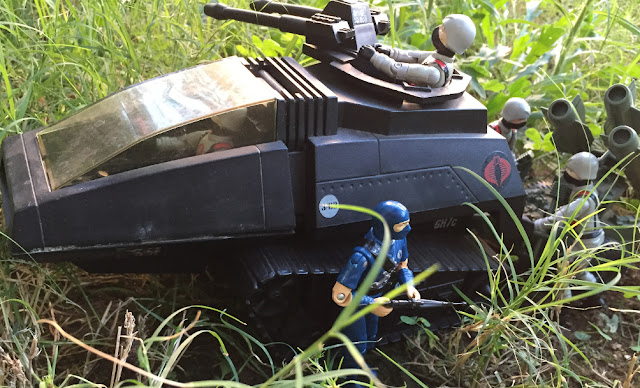 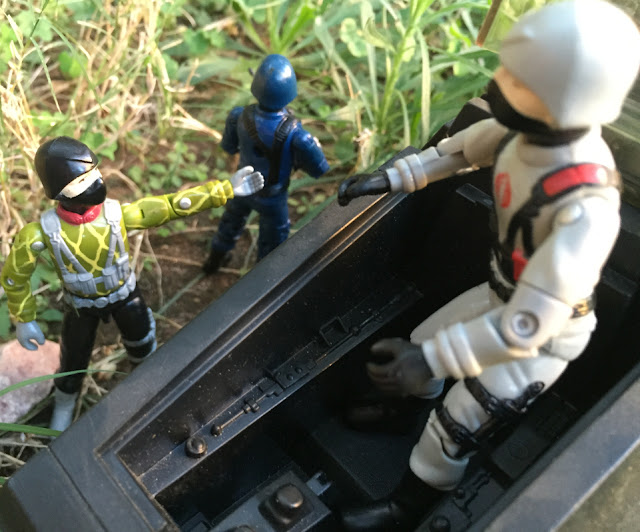 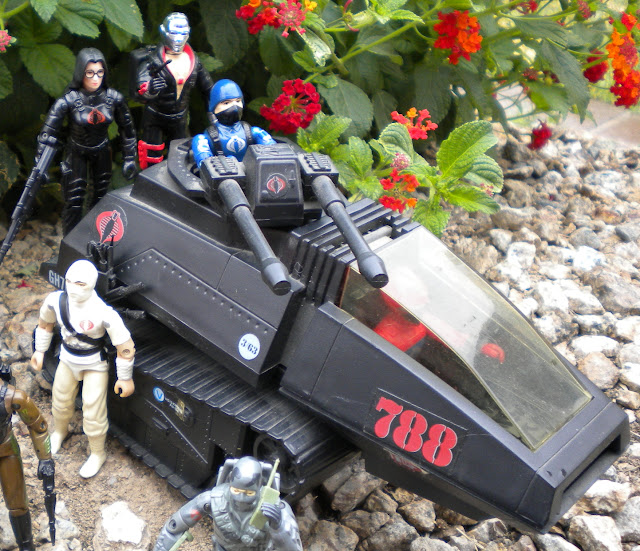 Posted by Robot_Sonic at 3:00 AM
Email ThisBlogThis!Share to TwitterShare to FacebookShare to Pinterest
Labels: 1983, Hiss Tank, Vehicles