In my many travels searching out the last retail remnants of the Joe line in the mid 1990's, there are a few figures that I never found.  This Cobra Commander was one of them.  It created the odd obsession where you just know that the figures you can't find are so much better than the ones you can.  To this day, I give a disproportionate amount of credit to figures that I didn't find at retail over ones that I did, even when the evidence of which figure is better is overwhelming.  In the case of this Cobra Commander, though, the figure is excellent.  The sculpting, colors and details are all in line with the character and fit with the notion of what Cobra Commander is supposed to look like.  Hasbro dropped a gem into the 1993 line with this figure and he is a release who really holds up well today.

The greatest complaint about this Cobra Commander mold is the bulk.  Most collectors have a view of Cobra Commander as a small, wispy man who isn't big on muscles.  This version is heftier than many collectors like.  I look at it two ways.  First, it was made in 1992 when the Joe line was getting a bit beefier.  If you stand this figure next to the 1992 Destro, 2001 Major Bludd and 1986 Viper, you have a solid Cobra Command and army that all fit with each other.  The other way to look at it was that in the very late issues of the comic, it was revealed that Cobra Commander wore a robotic suit under his uniform to both protect him and enhance his physical abilities.  This bulkier physique is explained by the armor beneath it.  In that regard, it works for me.  Plus, I like having a classic look commander that fits with the later figures from the Joe line.

For me, this look is about perfect.  The figure's hooded head isn't quite as elegant as it was drawn in the comics.  But, seeing the 2004 attempt to recreate the longer hood gives the actually released head much more value.  This Commander is regal with the arm tassels, formal tunic and bandolier.  But, the molded knife and pistol also denote that this Commander is dangerous and not to be trifled with.  I've never been a fan of the flat back.  As such, this figure's proper design elevates far above the other releases of this basic mold.  The black color is fitting with Cobra and matches with the classic blue.  The figure's furled brow and angry eyes showcase far more character than you usually saw on G.I. Joe toys.  (But, it was also a sign of the times as '90's action figures ushered in a wave of facial expression, though often to the detriment of the overall toy design.)  There's just enough color to keep the figure from a dual chromatic limitation with the red Cobra logo and belt buckle.  In this case, the simplicity works and you get an elegant, yet dangerous Cobra Commander.

For me, this figure was a unicorn.  It enticed me from the cardbacks of all the 1993 figures I was able to find at retail.  But, Cobras were popular even back in the 1990's.  This Cobra Commander, the Alley Viper and the Flak Viper were three figures that I simply never found.  (Oddly, I found multiple Crimson Guard Commanders.  Why them over the orange Flak Viper?)  So, the figure remained elusive.  Around 1999 or 2000, I picked up a carded version of this figure in a random lot.  I planned to open it. But, it was so nice of a card that I hesitated.  Before I came to a final decision to open the carded figure or not, however, I acquired a large lot of 1992 and 1993 figures that included a loose version of the figure.  (Back in that time, it was fairly difficult to find loose figures from any year after 1990.)  It wasn't mint.  But, it was good enough to keep me from opening the carded sample.  From that day on, the 1993 has been my default Commander version.

Hasbro used this mold to death.  After it's introduction in 1992 in the Super Sonic Fighters line, the figure's flat back was discarded and remade in regular style for this 1993 version.  (Overstock 1993 Cobra Commander figures were available from kid's pizza chains in the 1990's, too.)  In 2000, the mold appeared again, this time in a deep Cobra blue.  However, the 1993 back was gone: replaced by the awful flat back from the original figure.  This same construction continued.  Master Collector released a lighter blue with red highlights version of the figure as a convention exclusive in 2003.  They offset the flat back by including a cape.  This is a very well done figure and a worthy successor to the 1993.  In 2004, Hasbro sculpted a new, hooded head and put the figure into the first comic pack.  The head is interesting.  But, nothing great as it doesn't fit the body quite right.  The flat back and bright yellow color leaves the figure as less than stellar.  In 2005, the new head and flat back body appeared in copper in the Imperial Processional pack.  It's final appearance was as a translucent Cobra Commander that was released in a comic pack in 2006.  Why Hasbro didn't just sculpt a battle helmet head is beyond me.  They could have released that in the comic pack and collectors would have gotten something they didn't have.  But, it never happened.  While this mold got a lot of uses, only two are decent, with this 1993 being the cream of the crop.

When taken in context of 1993, Cobra Commander's accessories were not too bad.  They were silver, which matched the figure and was realistic enough for the time.  The actual assortment of weapons, though, wasn't great.  The Rock Viper, Toxo Viper, Incinerator and Voltar rifles don't really fit with Cobra Commander.  His missile launcher is massive, but also a complementary red.  The odd point is that on his card art, Cobra Commander is seen swinging in on a rope.  Usually, if such a detail was included in the artwork, the figure would then include a rope as well.  Cobra Commander did not.  It may have been artistic license for the artwork.  The Commander on a rope is a bit out of character.  But, it's also possible that it was a planned piece of gear for this version that was scrapped too late in the process to update the artwork.  Personally, I've always outfitted this figure with a Track Viper/Nitro Viper pistol.  It is reminiscent of the original laser pistol from the 1983 figure, cast in black and not overly hard to find.  To me, it better fits this figure than his included gear.

It should be noted that Funskool produced an inarticulate figure based on the 2000 use of this mold for the premium figures that were available with Pepsodent toothpaste in India.  Several cheap toy makers in Asia then acquired this mold and produced figures in various knock off packs throughout the early 2000's.  In the early 2010's, a large portion of knock off figures based on 1993 Joes appeared on the market.  They had remade G.I. Joe cards and artwork, but were not Hasbro properties.  This Cobra Commander mold was among the figures made.  (It's likely they were made by recreating 1993 molds rather than using the Hasbro molds themselves.)  The paint jobs are horrible and the quality is too awful to describe.  The Cobra Commander is interesting in that he has silver highlights on his hands and facemask.  It's a different look for him, though it is obviously based on his Hasbro design.  These bootlegs offer collectors something else to look for that is based on this mold.  And, in the case of the silver faced knock off, a pretty interesting update that is worth adding to any collection.

This figure is stupidly cheap.  It seems that all the figures that were quickly snatched up off of retail shelves in 1993 were bought by dealers and collectors who hoarded them away for 20 years.  You can buy this figure carded for about $10.  Loose, mint and complete, he sells for half that.  There's really no reason to not own one at that price.  The figure is very well done, has acceptable accessories and is true to the Cobra Commander character.  He is everything you want out of a later done remake of a popular character.  I wish I had been able to find him at retail in 1995.  But, I had one within a few years and continue to enjoy the figure today.  In my opinion, he is one of the highlights of the 1990's as a whole.  If you don't own one, go buy him right now. 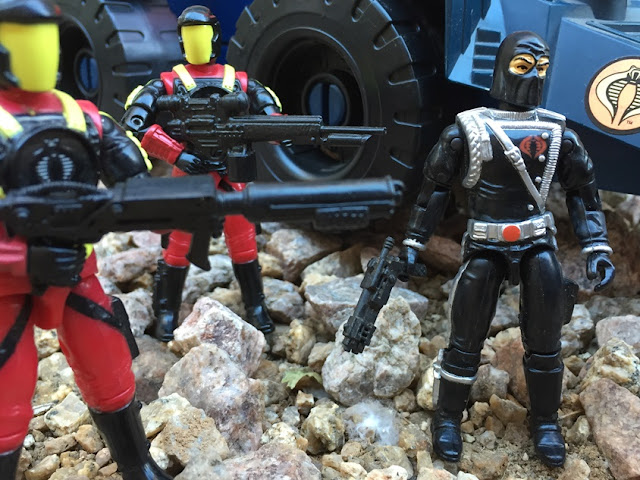 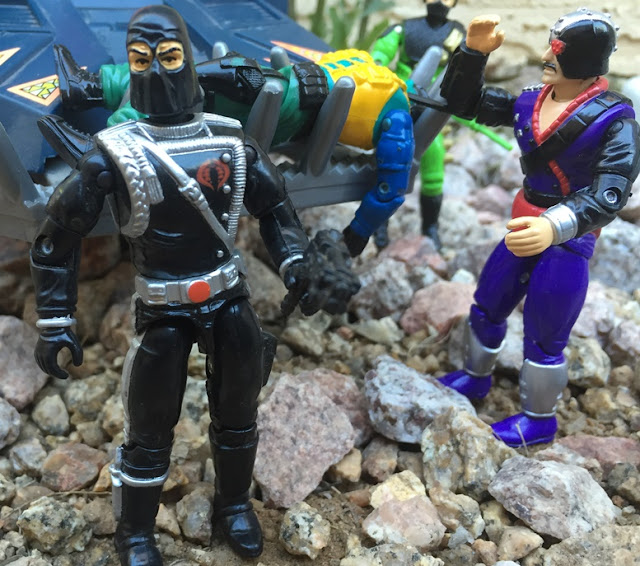 Posted by Robot_Sonic at 2:30 AM
Email ThisBlogThis!Share to TwitterShare to FacebookShare to Pinterest
Labels: 1993, Battle Corps, Cobra Commander