Back in October of 2000, I first reviewed the 1991 Red Star figure.  He was one of my great finds when I started buying '90's Joes and was a figure I immediately appreciated.  The high quality sculpt, excellent accessories and character obscurity all added up to a figure that was new and exciting to me.  As the years wore on, though, the figure fell to the wayside.  There was so much that was new to my collection from both retail Joes and back-filling my vintage collection that early finds like Red Star would be pushed aside as something even newer arrived in my mailbox.  The mid 2000's also saw many reuses of the parts that comprised Red Star, rendering him less relevant.  But, nearly 20 years after I first acquired this figure, I've once again come to appreciate the gem that Hasbro gave collectors in 1991.

In 1982, Larry Hama introduced the Oktober Guard in Issue #6 of the G.I. Joe comic.  This 5 member team was Russia's answer to G.I. Joe.  The cavalcade of interesting characters he created quickly found popularity among the comic readers.  Over the years, the Oktober Guard would return several times.  Many letters pages of the comic would include inquiries regarding Oktober Guard toys.  But, the overtures were always met with negative answers.  In the early 1980's, it would have been a tough political sell for any American toy company to include Russians...especially if those Russians were ambiguous in their affiliation since they shared a common enemy with the titular heroes.  So, the lack of Oktober Guard toys was at least understandable.  As the U.S.S.R. crumbled in the late 1980's, though, such inclusions were less taboo.  Hasbro then introduced Red Star in 1991 and Big Bear in 1992 as the first retail members of the Oktober Guard.

Red Star was problematic.  Larry Hama had killed off most of the Oktober Guard in the comic in the late 1980's.  Red Star was an obvious doppelganger for the original Oktober Guard commander, Col. Brekhov.  But, with Brekhov dead, Red Star came to be.  In 1993, Hama would parody this when Red Star was introduced in issue #146 as part, of all things, a Star Brigade introduction story.  The Joes noticed Red Star's uncanny resemblance to Brekhov and it was a nice inside joke to those around who understood that Red Star was meant as Brekhov before the existing character's untimely demise.  It also cemented the link between Red Star and Brekhov that would be confirmed by toys a full five years later.

Red Star was one of the first carded figures I ever acquired.  I bought a lot of carded 1991 figures from a prominent Joe collector of the day who would go on to work for Hasbro.  Among them was Red Star.  At the time, it was tough to find 1991 figures in any form.  A few characters, though, were more available than others.  Red Star, the Snow Serpent and the BAT were among the most common 1991 figures to find and they were readily available, especially carded.  Others, like the Crimson Guard Immortal and Desert Scorpion were substantially tougher to find.  It seems the figures that included spring loaded weapons either saw carry over into 1992 or simply had higher production numbers than the figures that did not include this new invention.  The upside was that you could get Red Star figures without too much difficulty.  The downside was seeing all the cool figures on the back of the package that were a lot harder to find back then.

Red Star has a lot going on.  1991 fell into the sweet spot for the Joe line.  The budget was still high and there was a lot that could be done with the toys.  Red Star took full advantage of that.  As a mold, the figure is well done.  He has the bulk and detail that defined the later Joes.  The dark tan base is an excellent foundation and the green web gear is nicely offset by blue and red details.  The highlight, of course, is the blue and white striped undershirt.  It defines Red Star as a Russian and is a fun little detail.  His gear continues in this vein.

The updated AK-47 is one of the highlights of the vintage line.  We were fortunate to see it released dozens of times in the 2000's as it was very difficult weapon to acquire prior to those re-issues.  But, the rest of Red Star's gear is more of a marvel.  His backpack is well detailed.  It features a softer plastic antenna (which is nice as you don't find bent and stress marked Red Star antennae like you see with that from the 1987 Falcon) and a holster for a knife.  It allows for self containment in the pack and gives Red Star much more diversity.  As if this weren't enough, Red Star also includes a 4 piece mini gun rig.  There are two barrels that plug into a base.  The base then attaches to the backpack via an ammo belt.  It's somewhat overkill.  But, it's a great inclusion with the figure and makes him that much more dangerous.  As a 1991 release, Red Star includes the first wave of spring loaded launchers.  However, the 1991 designs at least tried to be useful and Red Star's at least resembles an RPG.

For me, Red Star's role has changed from time to time.  He was, basically, a Col. Brekhov stand in until an actual Brekhov was released.  He was a nameless Russian for a while (especially when I had several of him) who would harass Cobra across Europe.  I never really developed Red Star as a character.  The idea of a post Glasnost Joe collaborator was very appealing.  As world politics have played out in the past 25 years, Red Star's position as an ally to American military aims becomes more complex.  In that regard, I think the character has value.  Is he someone who has a world view of eradicating groups like Cobra?  Or, is he simply pursuing that goal as it currently aligns with Russian military goals?  Can he be trusted and what can he be trusted with?  I think these types of interplays make Red Star more valuable as a Joe character.  But, having a solid figure certainly helps.

Red Star only appeared as this figure.  (There is a packaging variant where the cardback is a Cobra red or G.I. Joe blue.  The Cobra card is harder to find.  But, the figure is the same.)  However, the mold was used many other times.  It most famously returned in 1998 as the Col. Brekhov figure.  The paint job is neither better nor worse than Red Star, but he also has the full complement of gear.  The 1998 figure would be the last time that all of Red Star's accessories would appear.  In 2005, Hasbro used the body many times over in the Oktober Guard comic packs.  The new Col. Brekhov head has more character than Red Star.  But, also is missing the removable hat and proper scaling that we came to expect in the vintage line.  Red Star got somewhat cliched by the mold's overuse.  But, there is still potential there.  One of the great customs of the early 2000's used Red Star's body and an Ice Viper head to make an updated Cobra Trooper.  The G.I. Joe club borrowed this idea for the 2010 Red Shadow figure that makes great use of Red Star's body.

Red Star figures are not expensive.  While dealer pricing tends to run around $11, loose mint and complete versions can be found for around $7 with a little digging.  You can still get carded versions for around $15, too.  The character's large amount of small, easily lost accessories are offset by his high production numbers, later release date and general collector disinterest in his existence.  The upside is that you can find the figure with relative ease and even buying both of his accessory variants (he has a lighter and darker brown backpack) won't break the bank.

Red Star is definitely a figure worth owning.  He's a better version of Col. Brekhov than any of the Brekhov figures actually released.  But, keeping him as his own character works for Red Star, too.  He's kind of a blank slate and has the quality of design and gear that lends itself to many uses.  As such, there's no reason he shouldn't be part of any collection.  He is definitely a figure I appreciate and have found to stand the test of time against some of the poor and redundant 2000's era of Joe releases.  You can see that the figure was an Oktober Guard stand in.  But, that's OK.  When the design's as strong as you see on Red Star, the fact that he represents something we didn't get is not really a problem. 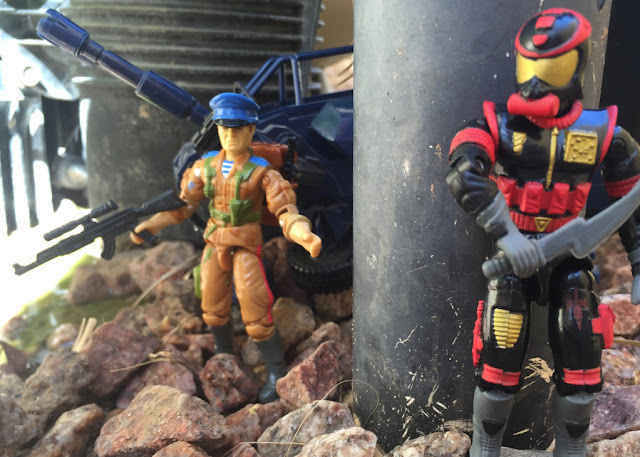 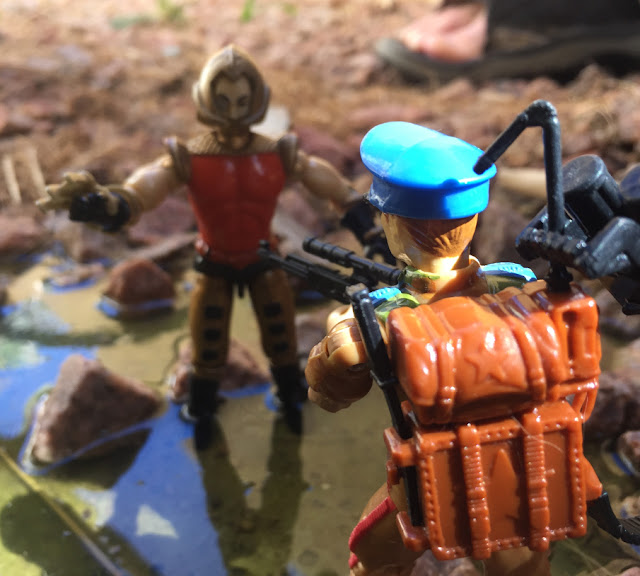 Posted by Robot_Sonic at 3:30 AM
Email ThisBlogThis!Share to TwitterShare to FacebookShare to Pinterest
Labels: 1991, Red Star