Slice and Dice are kind of like Tomax and Xamot.  You simply can't look at one without acknowledging the other.  So, today's profile is a tag team effort with The Dragon Fortress.  He's going to review Dice while I take a look at Slice.  This way, both characters get their due and retain the tie that binds them together.

When I first saw Slice and Dice in the G.I. Joe comic book in late 1991, I was immediately drawn to the Slice character.  His sleek look and excellent head showcased something that I thought would translate well to toys.  I went looking for G.I. Joe figures at retail just one time in 1992.  That visit was sensory overload as the aisle was packed, everything was new to me, and I was on a time crunch since it was over my lunch hour and it took 20 minutes each way to get to the store.  So, the thought of looking for a Slice figure never really entered my mind.  In the ensuing years, it's entirely possible that I came across a Slice figure in my retail encounters.  Ninja Force figures were usually some of the last Joes on the pegs.  But, as I was generally not interested in them since there were other figure options available to me, I paid them little mind.  As an adult collector, I finally picked up a Slice in a general figure lot.  But, as the figure lacked standard articulation, I, again, gave the figure little credence.  Now, two decades later, I've found a quiet quality in the Slice figures Hasbro released.  The sculpting is good, the articulation isn't as off putting as it can be on other figures and, there are some striking color variants: none more so than the bright orange 1993 Ninja Force Slice.

In the summers of 1995 and 1996, I worked near the local Toys R Us store.  Especially in 1996, I would often go to this store 3 to 4 times per week.  I was mostly looking for Star Wars figures.  But, as those were almost always the same pegwarming Luke Dagobah and Han Hoth figures, I spent a lot of time looking at the straggling supply of Joe figures.  I had bought most every figure I wanted.  And, the good figures were few and far between.  What was not in short supply, though, were Street Fighter and Ninja Force figures.  As the Battle Corps finally sold out, I was left with few options for new Joes.  I picked up countless versions of the Street Fighter figures and would always put them back, unpurchased, as I simply could not get over the look of the figures.  One night, in 1996, I finally succumbed and bought a Ninja Force Night Creeper figure.  As soon as I opened it, I regretting buying him.  (Though, my stance on that figure would later change.)  This doomed any other Ninja Force from being added to my collection.

As the 1990's wound down, my Joe buying efforts were all over the place.  I bought early figures, I bought middle figures and I bought late figures.  I was desperate to get as much of the line as I could.  But, through all that acquisition, Ninja Force figures were few and far between.  It might be that I steered clear of lots that contained them as they didn't have enough, other material to make their purchase worthwhile.  Or, it might be that kids of the day didn't like those figures any more than I did.  Whatever the reason, it was a rare occasion to find a Ninja Force figure.  While I did manage to get a handful of the 1993 Ninja Force figures, this Slice was never among them.  While I obsessed over other, orange figures.  I left this Slice alone because of my lack of interest in Ninja Force in general.

In 2002, Hasbro released a Slice repaint.  Having this figure in hand reminded me of my comic interest in Slice.  But, it also got me thinking about the figure.  I wanted to find a use for Slice.  But, again, the non-standard construction was a limiting factor.  Now, though, as my collecting needs have dwindled to a very small pool of figures, I find Ninja Force figures generally more acceptable.  And, of the Ninja Force mold, I find Slice to be the best.  He lacks much of the bulk that the non-standard construction required and his movements don't necessitate blocky hips or legs.  He looks like a standard Joe figure and fits in with them just fine.  While some of his poseability is limited, he's not as stuck as other figures like Snake Eyes or Scarlett.

This had lead me to finally appreciate the Slice figure as much as I liked the original character in the comics.  The mesh face mask was always a look that I thought was extremely cool.  And, Slice's choice of headwear does translate into the figure.  The rest of Slice's body is relatively plain: befitting a ninja.  The contrast of the sleek, unique head and the standard, robed body helps to keep Slice from being too busy.  I now find him a near perfect rendition of a martial artist and an excellent foil to Snake Eyes and, if you're inclined, Storm Shadow.  It's taken me more than 25 years to finally come around the mold.  But, mostly that was due to inaccessibility.  With the figure in hand, you see that Slice has some decent uses and is fun to have around.

Slice's weapons are actually rather decent.  While the weapons trees of 1993 and much maligned, Hasbro did hit a home run every now and then.  For starters, Slice's weapons are cast in black plastic.  This makes a world of difference and not only aligns them with the figure's accent color, but also makes them more palatable to the eyes.  The weapons themselves, though, are nicely designed.  They are a bit large for the scale of the Slice figure, but still work.  For someone like me who grew up on the flimsy Storm Shadow and Snake Eyes swords, these larger, bulkier items took a bit of getting used to.  But, they work well with the figure.  The two sided knives are extremely cool looking.  The large sword with the hooked end is, as well.  There is also an axe, knife and spear that are both well detailed and in scale with the figure.  In short, Slice includes a ninja arsenal and all the weapons make sense.

There is a lot and a little done with the Slice mold.  The mold was used quite a bit in the vintage days.  In fact, I believe that Slice is the only character/figure mold to be released in three consecutive years (1992, 1993 and 1994) in three unique paint schemes in the vintage line.  (The 1992 Stormshadow mold was used three consecutive years, but the 1993 incarnation was as T'Gin Zu and not Stormshadow.  The 1992 Eco Warriors Barbecue was turned into Payload for the 1993 and two 1994 recolors.)  In that time, Hasbro did the original, red version, this orange version and a translucent Shadow Ninjas version.  While these figures were on the shelves, Hasbro also used the body for the two versions of the Ryu figure from the Street Fighter subset.  (If this figure was standard construction and could support simple headswaps, dropping a Slice head on either Ryu figure would make for a solid rendition of the Slice character, too.)  The body then also shows up in the Mortal Combat movie line where it was the basis for Reptile, Smoke, both versions of Scorpion and both versions of Sub Zero.  If that were not enough, the entire figure reappeared in 2002 in a 2 pack with Sure Fire.  That was the end of the mold, though, and Hasbro didn't come back to it, even though it could have found a home in the Toys R Us Ninja Pack or a later comic pack release.  But, there are no less than 12 retail appearances of the mold, plus a few international packaging variations.

This Slice version is pricier than I would have thought.  Mint and complete with filecard figures tend to sell in the $10 range.  Carded figures will also sell at nearly $20.  For a bright repaint of an obscure mold that's buried in an unpopular subset, that's kind of high.  However, in my years and years of buying up lots of 1993 figures, I never came across a loose Slice.  In fact, all of the '93 Ninja Force were scarce and I only got Zartan, Scarlett and Snake Eyes in one huge lot that also included a large number of other, harder to find figures.  But, if you take some time, you can find the figures at cheaper prices.  Many toy dealers who don't specialize in Joe will sell carded versions for $10.  So, you can take advantage of those deals before the supply dries up.  I don't know if Ninja Force is going to become the next cheap Joe subset to increase in collector popularity.  It seems that collectors fall into two camps on the subset.  They either were an early adopter who likes ninjas and has had the figures from the beginning.  Or, they have completed everything else and find Ninja Force the last, unexplored bastion of the vintage Joe world.  I squarely fell into the second camp.  But, I have found myself enjoying these figures, even if it's just because they are something new and interesting.  They are cheap and relatively easy to acquire.  And, that's goes a long way.  Were these $30 figures, I'm not sure I'd be spending the energy to get them.  But, at current pricing, I'm finding some joy in these late run oddities. 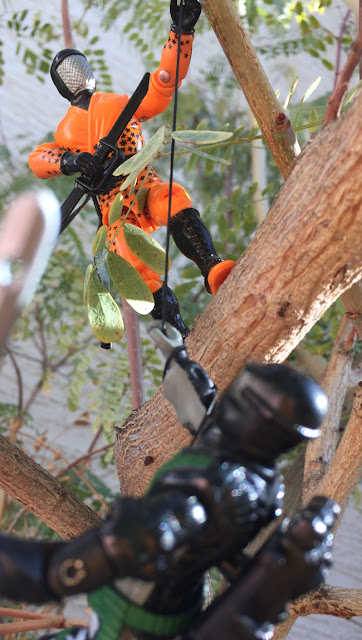 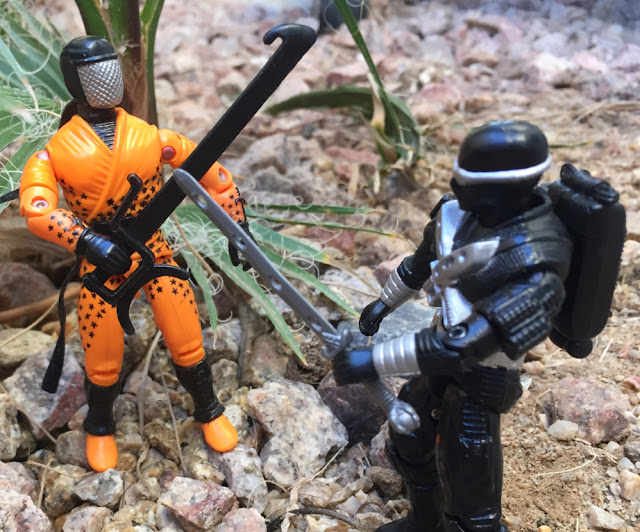 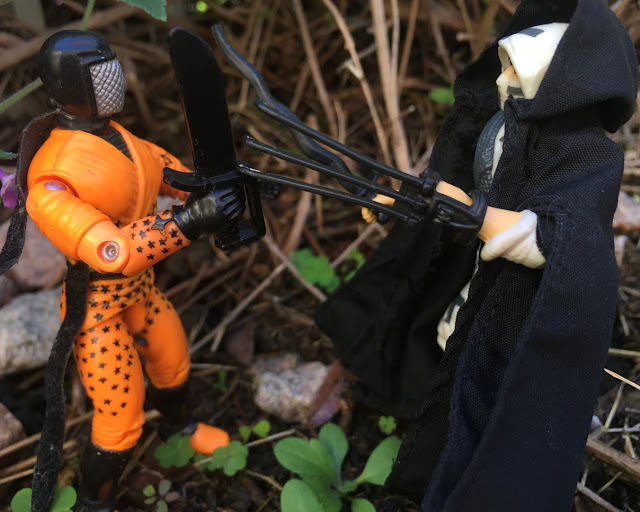 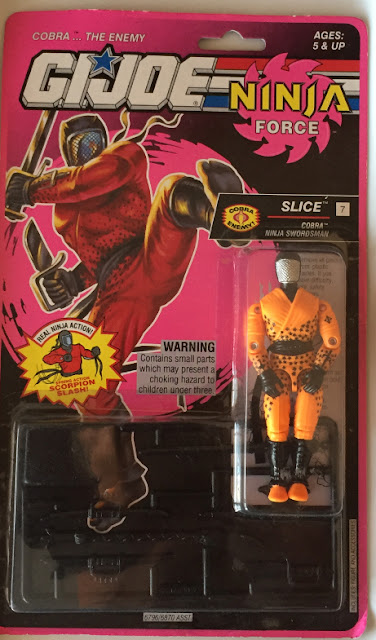 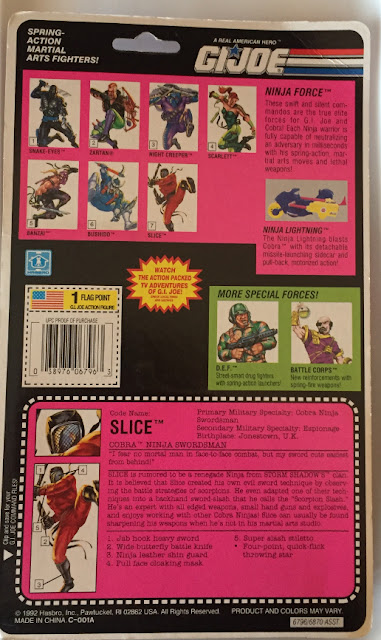 Posted by Robot_Sonic at 1:03 AM
Email ThisBlogThis!Share to TwitterShare to FacebookShare to Pinterest
Labels: 1993, Ninja Force, Slice